The rain was still falling. But the sun was about to overtake the remnant clouds. Sun rays broke through with dazzling warmth, awakening the memory of what Sunday afternoon was supposed to be like. Louis King, president of Summit Academy OIC called. “Mr. McFarlane, are you ok? I want you to know we are ready to help wherever we can,” King said.

Matthew McGlory, a youth leader and budding entrepreneur called. “ Mr. McFarlane, I saw the trees down in front of your house. Our street is a mess! If you call a meeting to help organize how we respond, I’m available,” he said.

Neighbors Jackie Cherryhomes and Clayton Tyler came down the street. They live across the park on Sheridan, almost opposite my house on Thomas Avenue. They were starting their walk through the neighborhood, assessing the damage, seeing where help was needed. I said to Cherryhomes, former 5th Ward City Council Member who led the city as president of City Council, “Lets meet tomorrow morning at 8am at my office. Lets talk about what just happened to our community and map out strategy to deploy the assets and capabilities of our community to heal and restore our community,” I said.

Cherryhomes dropped back by on her return home with sad news: “Rob McIntyre is dead. He died of a heart attack a few minutes ago. He was helping neighbors clear debris.” 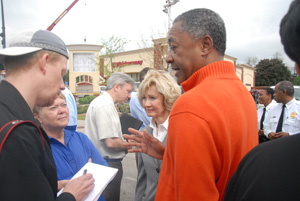 McIntyre, a world renown researcher and inventor, was the first tornado related fatality that we learned about. While he died responding to the aftermath, we later learned there previously had been a direct casualty. A resident who lived in the 37th and Freemont Ave N neighborhood was crushed by a falling tree, one of the thousands uprooted by the ferocious storm.

This man, a granddad, was taking a youth member home from church when the tornado struck. Family members said later on television news that his face had been shorn off. A decapitation. The young man, we learned, suffered serious injury, but would survive.

Less than an hour ago, I think about half past two, my partner Bobbie Ford and I sat at the stop light in our SUV, second car in line, waiting for the light to change. We were facing east on Olson Memorial Highway, preparing to turn left onto Wirth Parkway. As I drove in from Plymouth, I marveled at the weather in my rear view mirror. Ominous clouds blackened and billowed. Weather moves from west to east, I said. We should be home before this gets too serious, I thought. 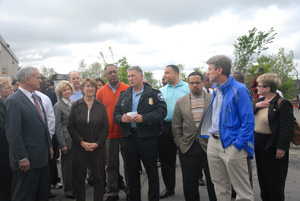 Before the light could change, the sky changed. The wind became visible. Not just metaphorically, as in the swaying of tree branches and leaves, but palpably, decloaked by its cargo: trees falling from the sky.

When the light finally changed, like the car in front of us (why were they waiting?) we u-turned and sped out to the west, hoping not to be lifted by the spiraling tornado.

It seemed safe again as we neared the Highway 100 exchange. So we turned around again and headed back toward the storm. It looked like things were clearing up. We made our way through Theodore Wirth Parkway, noticing a little damage, then, just past the Chalet, as we headed up Plymouth Avenue, all we could say was “Oh my God!”

Plymouth Avenue was blocked. Trees were down. Power poles were down. Several power lines stretched across the street. Not safe to drive across, we decided.

Doing video with MyTouch telephone in one hand, and driving with the other, we retreated again and detoured north on Wirth Parkway to Golden Valley Road.

It looked like the Apocalypse. The course from Washburn to Penn was like a giant slalom ski course…to the left….then to the right…then to the left again….avoiding trees, however, not ski run markers.

By the time we got to Penn, first responders were on hand, triaging stunned traffic, beaming in on power hazard, looking for people who needed help. Penn Avenue from Golden Valley to Plymouth was the same way. When we got to Thomas, we found our usual access to garage area parking blocked. We parked on the street in front of our house.

Ivan Phifer, an Insight News reporter and Northside resident, along with his dad and mom, Kathy and Renne Phifer, came by. Like the Cherryhomes/Tyler family, they were surveying the neighborhood, helping where they could. They stopped and visited with us for a while, as did our daughter, Selene and nephews and nieces, who called and visited, concerned for our well being.

Phifer told us he walked through the tornado and at one point, was lifted in the air and dropped again.

I made the call to several elders in the neighborhood. “Let’s meet in the morning at Insight.”

How do we communicate to the public about the resources and supports in North Minneapolis? Is there concern about scam contractors – outsiders who are in a rush to “help”?

We determined we should use our community media, including Insight News, Spokesman-Recorder, North News, KMOJ, WRNB and KFAI Radio, and, work with churches and non-profits to warn residents of scams and inform residents of North Minneapolis resources.

We said it is important to serve notice that our community is organized and responsive and that engaging assets like the Black Chamber of Commerce, NAMC, Thor, Summit Academy OIC, Network for Better Futures, Minneapolis Urban League, NorthPoint Health & Wellness Center, Turning Point, Urban Research Outreach/Engagement Center (UROC) and other legacy institutions will best serve residents, business and agencies that make up our community.

* We decided to set up a Construction/Clean-up Clearinghouse with Thor Construction being the lead organization.

Thor will establish a special number and assign staff to respond.

* Promote the phone contact number and resource information through all communications and media networks in North Minneapolis.

NAMC will assist in coordination effort.

Pillsbury agreed to serve as Services and Helping Resource Coordinator for people in need of food, housing and other services. Pillsbury staff would be available at Oak Park Center, 1701 Oak Park—Phone: (612) 377-7000.

The elected officials said their offices would continue to collect and distribute resource information to their constituents.

Community churches will bring a legacy of capacity, know-how, and connectedness to the response to the Sunday’s tornado, said the Rev. Jerry McAfee. “Yes, there is tremendous physical damage to our homes and streets. But we know there is mental and spiritual trauma as well. Under the umbrella organization His Works United, an ecumenical fellowship spanning the breadth of church denominations, the church community conducted  a service for healing, Friday night at Shiloh Temple on West Broadway,”  Rev. McAfee said. The service celebrated and strengthened the spiritual well-being of our community.

“Zion Baptist Church is opening its doors to the Northside community that has been affected directly and indirectly by the tornado. In many ways it has affected us all. We will be offering prayer, spiritual support, snacks, household goods, toiletries, licensed counselors and a place for people to relax, have solitude and a temporary peace of mind,” church officials said.

Minneapolis Urban League President, in a statement to the community added: The Minneapolis Urban League has been working with several community partners to organize efforts to respond to resident needs.  We have offered our Glover Sudduth Center facility to the City of Minneapolis as a staging area for providing emergency services if they need it.  I received a direct call from Sen. Al Franken, asking how we were doing and offering his assistance as we begin to help the community.  By the end of this week, we may be working with a group of community partners and vendors to offer lunch to volunteers who are helping to clear debris and to residents who have been evacuated from their homes.

We are stressing partnerships and information-sharing so that our constituents have up-to-date information about the resources available to them,” Gray said.