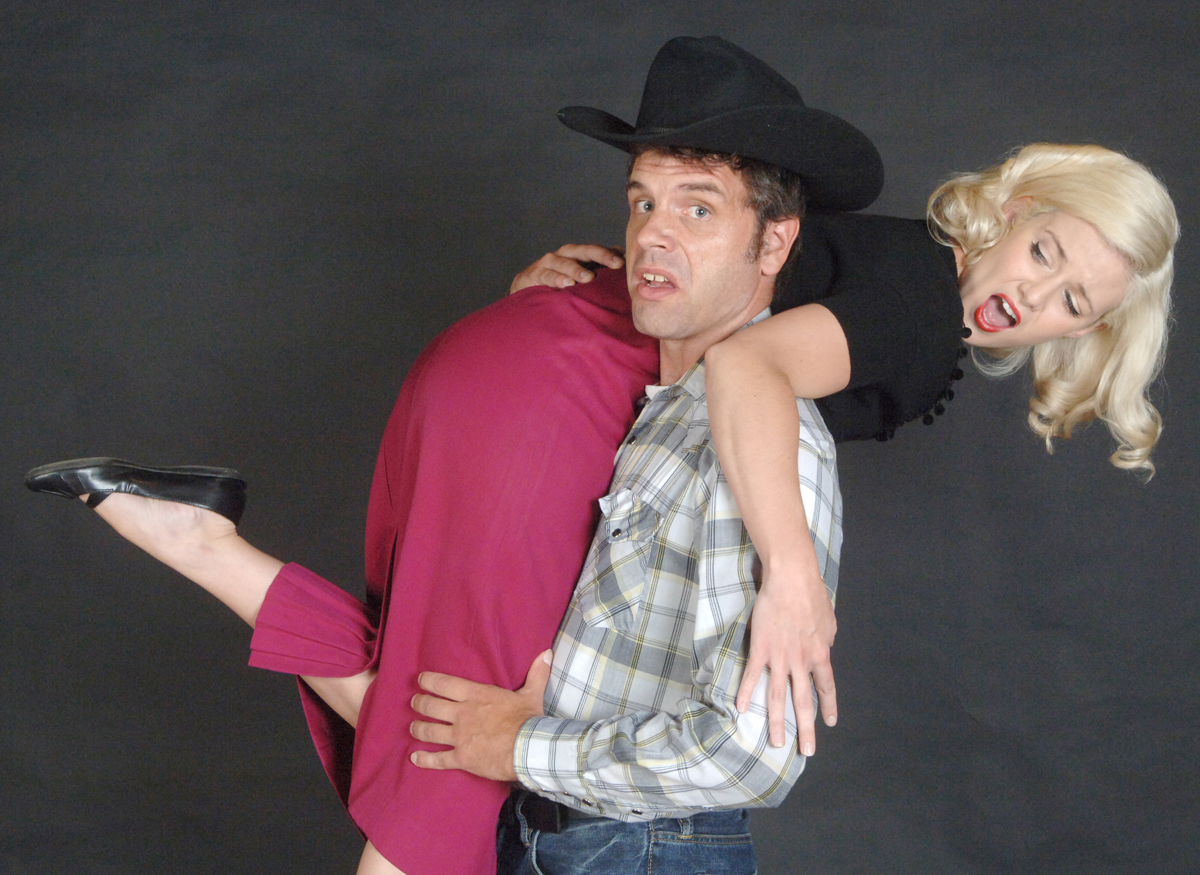 Josh Larson and Katharine Moeller in Bus Stop. Photo © Act One, Too, Ltd.; courtesy Theatre in the Round.

First on the boards for Theatre in the Round’s 2011-12 season is the work of William Inge, who gave the world such celebrated dramatic milestones as Come Back, Little Sheba and Picnic as well as the criminally unsung A Loss of Roses. He’s represented here by the modest, lighthearted foray Bus Stop (right, the movie version starred Marilyn Monroe).

Profundity wasn’t exactly what Inge had in mind with this script (though it does have a thoughtful moment or two). Bo, a handsome, strapping rodeo champion and natural-born doofus about as dumb as a bag of rocks when it comes to wooing women is smitten with Cherie, a pretty saloon chanteuse who likes the big lug, but is scared off by his dim-witted, heavy-handed advances. This boy-meets-girl mishap is at the center of a story in which couples dance in romantic circumstance, stuck overnight in a diner, snowed in by a raging storm.

Few men write thoroughly convincing female characters, an Inge long suit, and while the ladies here aren’t his most salient examples, they thankfully ring true. You have absolutely no trouble believing them. The male characters, a bit more fleshed-out, are solid as well, giving Bus Stop a handful of interesting folk who fuel this simple, ultimately endearing story quite well. (Though for all its engaging humor and reasonably happily-ever-after ending, Inge the historically dour dramatist can’t resist sticking his head up at the end with a closing line that amounts to a parting shot at rosy-eyed idealists.)

The cast, for the most part, is serviceable—adequate but unremarkable. John Lilleberg misses that mark as Dr. Gerald Lyman, a former college prof and sinking-fast, drunken letch. Lilleberg misses the chance to give Lyman understated wit, leaving a pompous self-sorry figure with whom there is no sympathizing. Joshua Larson similarly doesn’t grasp Bo’s underpinnings. Accordingly, there’s little gravity to the portrayal and enough idiocy to make you wonder how this guy figured out one end of a horse from the other, let alone built up a large ranch and salted away a nice nest egg in the bank.

As Cherie, Kathrine Moeller hits her mark squarely enough, but doesn’t possess enough stage presence to do much more than that. Emily Dussault as a naïve waitress Elma Duckworth, Daniel K. McDermott as easy going bus driver Carl, and Gini Adams as Grace Hoylard the diner’s pragmatic owner all are reasonably on point with their broad strokes, but lack immediacy.  TRP mainstay H. William Kirsch is beautifully subdued yet clearly in authority as Will Masters, the sheriff. Area veteran Carl Shoenborn is just fine, giving a resigned air to his portrayal of Bo’s sidekick, ranch hand and guardian of common sense, Virgil Blessing. Director Rob Goudy does what he can, keeping a brisk pace, but this production simply is not the runaway hit it could be. This production is a case of the play carrying the cast.