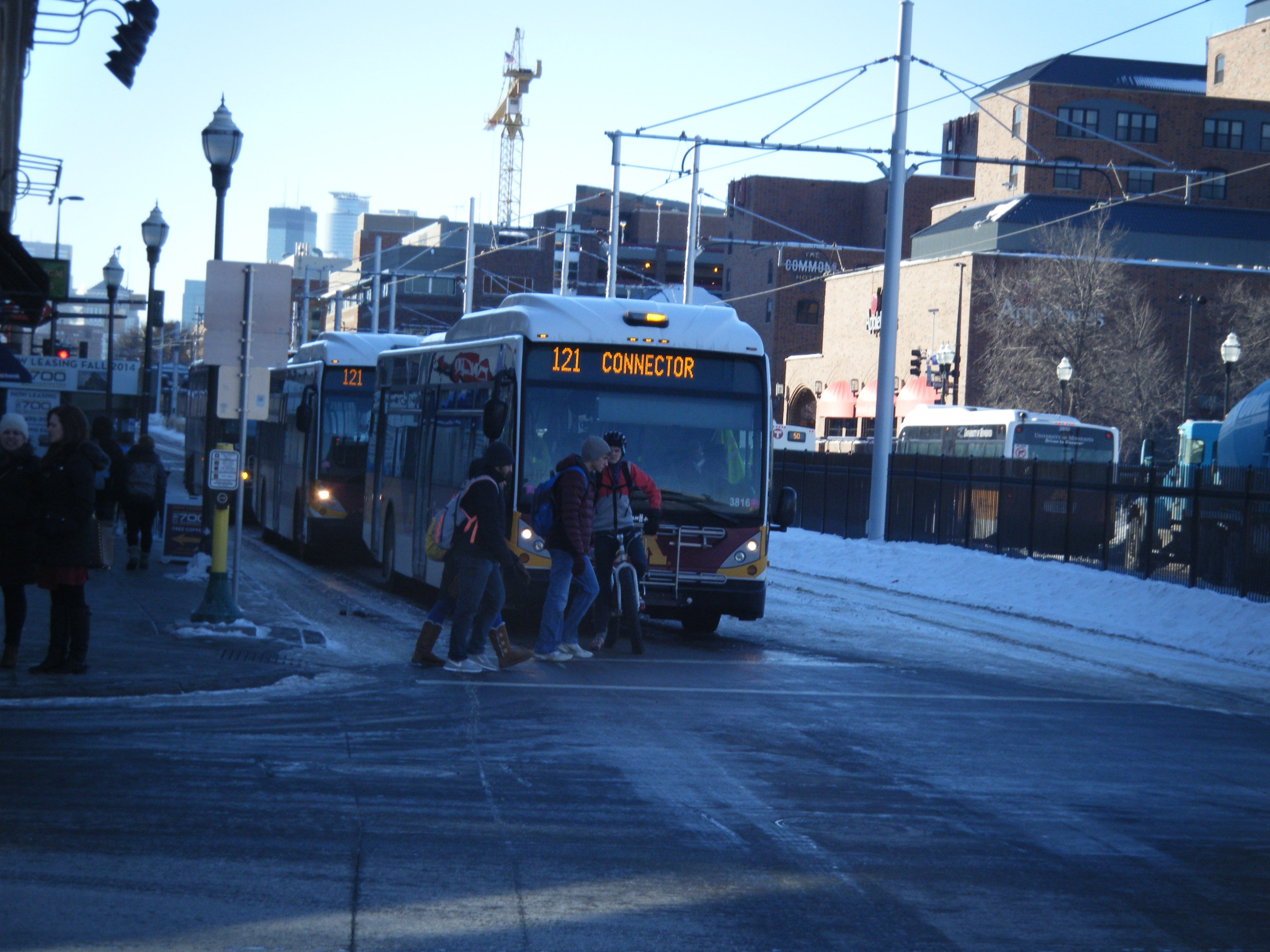 Recently I completed a series of posts on Bus Rapid Transit (BRT). Although I had mentioned it as being complete, there should be a quick introduction for those unfamiliar with developing transit techniques. Thus, this post will discuss what Bus Rapid Transit (BRT) is, and the main advantages/disadvantages to using such a system.

BRT is, in essence, a way to use buses in the way we would think about using trains. By mimicking light rail type systems BRT can speed up travel times, improve reliability and improve the overall transit service along the route. This is done in several ways. BRT systems should have dedicated lanes, level boarding, off board fare payment/multi-door boarding, and special signals at intersections, these improvements all contribute to faster running times and higher reliability.

Dedicated lanes are often the hardest part of a project to get political support (see Red Line), but they are also the most essential portion of BRT projects. By dedicating lanes to buses, the buses no longer have to compete with normal congestion and traffic, and we can see this in the Twin Cities using the proxy of Bus-Only Shoulders. Bus-Only Shoulders have been shown to increase average speeds, reliability, and ridership. 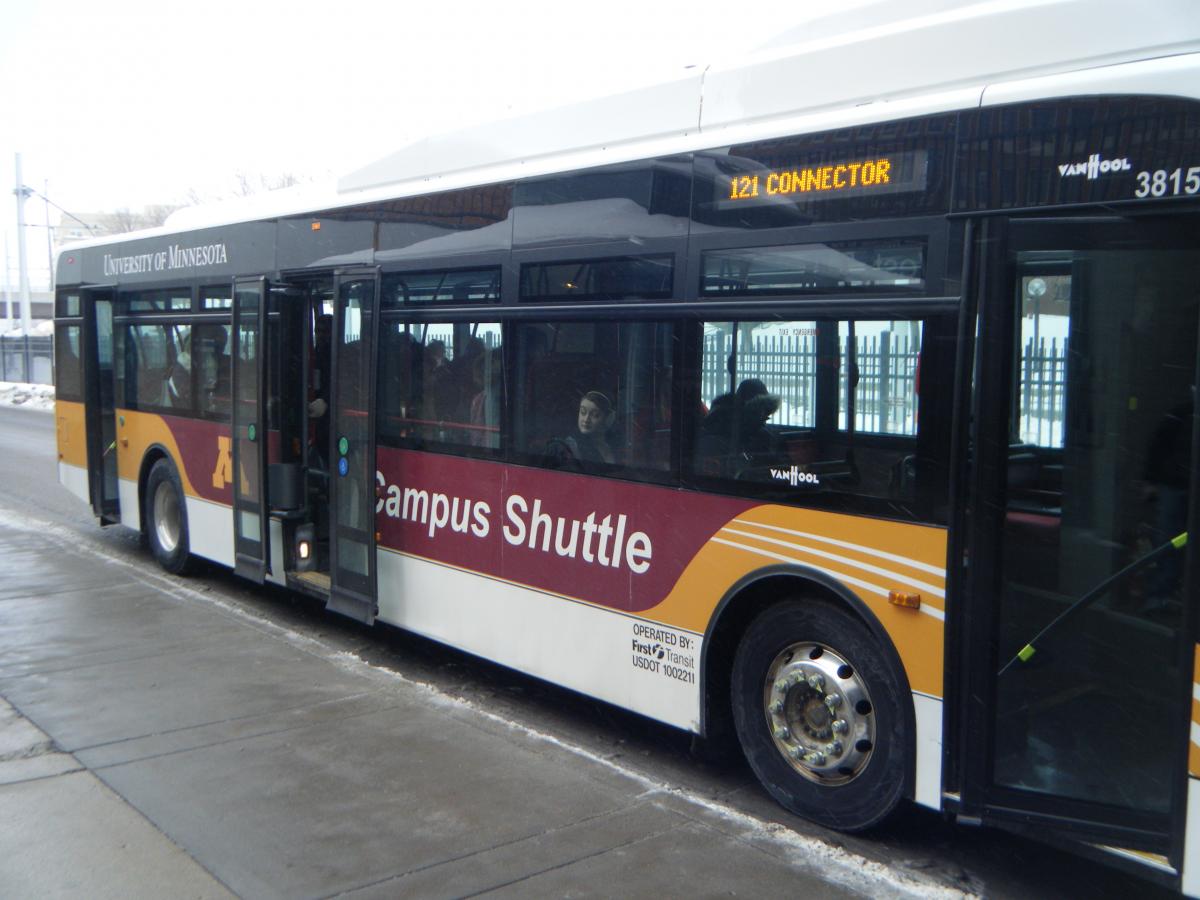 Boarding in a BRT system is meant to be level and use multiple doors, with fares paid for before boarding the vehicle. Level boarding prevents delays from buses kneeling, or using lifts to accommodate those with disabilities, or those who are less sure footed. By removing changes in height from the boarding process the system can board faster, be more inclusive, and be more reliable by not being delayed by individual passengers. Using multiple doors to board a bus is similar to how trains board their passengers, this system is already used by the University of Minnesota’s Campus Connector and express bus outbound trips. This method is faster than single door boarding, simply because there are more entry points into the vehicle. Pre-paying for fares also speeds up the boarding process, especially for cash fare patrons. If you would like to experience these improvements in boarding for yourself ride a train, then ride a heavily ridden local bus route (ex: Blue Line and the 16). When these steps are taken as a unit, no queue to enter ever forms, and every stop will take a similar amount of time.

Also like a train, a BRT’s buses should have some sort of advantage at intersections, either giving them the right-of-way or at least moving up the bus in priority against other traffic. This can take many forms, from signals being timed for non-stop trips between stations, to giving buses a head start, to simply preventing left turns when a bus is present. Signals again increase speed and reliability, and can be some of the most exciting technology that exists (it is being installed across the Twin Cities, mostly as a way to keep buses on schedule by holding green lights for just a few extra moments).

We already have trains, why do we need BRT too?

BRT uses buses, and pavement. We are good at buses and pavement, and they are cheap in comparison to trains and rails. Because of our existing infrastructure for maintenance of buses and roads, we gain the economies of scale from already having an expansive bus service and road network. 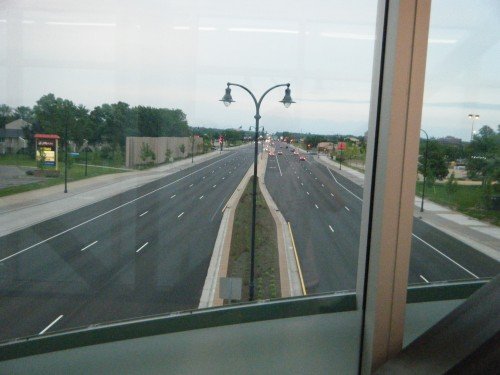 Right: About nine lanes in total, as a surface road… we do this a lot.

BRT can be adapted and made to be more palatable than a train in some situations, such as the Orange Line in Minneapolis. Instead of dedicating lanes solely to buses, the lanes also serve carpools and people who will pay a toll. Rail projects, especially those that are going to be operating at a higher speed than a streetcar, need their own right-of-way simply because they cannot stop from high speeds as quickly as would be needed in congestion and other common occurrences on these roadways. This allowance for some infringement on the dedicated lanes can make projects more palatable to the driving public because they are not seen as taking away roadspace. BRT projects can serve entire corridors, not just a single route. When you build a train, you usually cannot drive a bus on the train tracks, that space is only for trains. Thus the improvement of building the line only benefits those that will use that line. 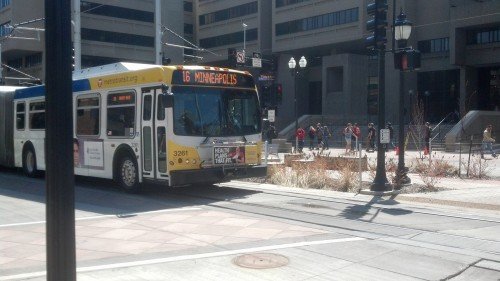 Right: Sometimes buses do drive on train tracks, but it’s not often.

With BRT, a local bus that needs to travel along the corridor for a short while can still use the BRT improvements, as they would not be able to use train tracks, providing benefits to transit which might use the corridor but not the line.

So what’s the catch?

BRT does have some downsides, operating costs are typically higher than with trains simply because you need an operator on every bus, which can max out at about 80 passengers (even with standees and an articulated/accordion bus). Trains can be joined together, and train cars have higher capacities than buses, providing a more efficient allocation of labor.

People like trains. I will let this play itself out in the comments, but in the U.S. it appears that people prefer to take a train rather than a bus.

Remember how BRT can be made more palatable from above? Like the Orange line with letting carpools into its lanes? While that’s great for getting something done it removes a lot of the advantage that BRT gains from having these facilities. From not fully dedicated lanes, to not getting the lanes in congested areas (where they’re most needed), to not giving BRTs any lanes and instead relying on queue jumps at intersections, there are lots of ways to make your service less effective. This phenomena happens often enough it has been dubbed as BRT Creep. While the most common forms of BRT Creep involve the dedicated lanes, sometimes stations just become normal bus stops, prepayment is ignored on some or all stations, or a service is otherwise worsened to cut costs. This doesn’t typically happen with trains, because trains cannot be mixed with normal traffic, cannot kneel, and need conductors if they don’t have prepayment. When trains need to cut costs, you end up with fewer stations, a shorter line, or an alignment through a park instead of a dense urban environment. When BRTs need to cut costs, you end up with a new bus that’s painted a different color than the others. This is why BRTs are hard from a planning and a policy perspective, there is so much flexibility that they can be watered down to the point that we get Arterial BRT, which really comes to slightly improved bus service. 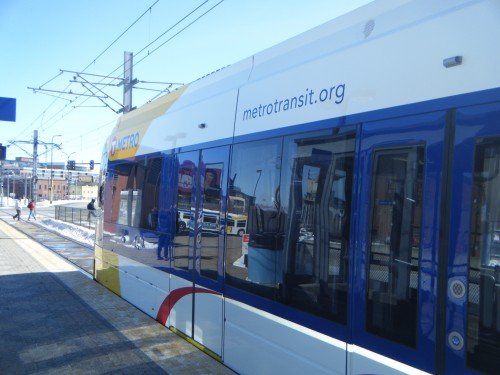 Right: It’s hard to justify a lack of a platform for a light rail station.

If you would like to revisit the evaluations of the Red Line, Campus Connector, or the BRT Scorecard, with this new information, please do.

Sources (not linked in above)