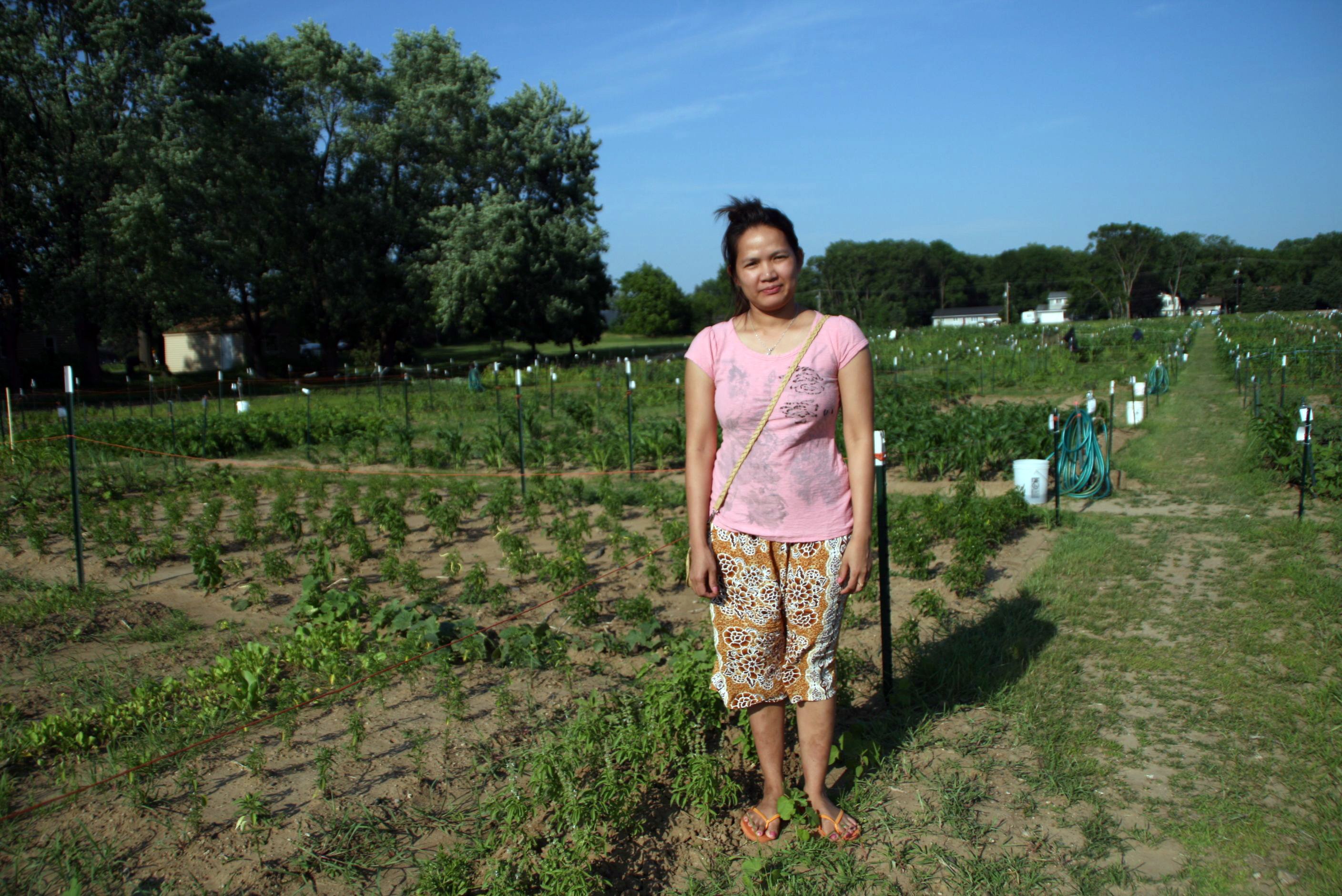 If you travel to the east side of the Metro, past St. Paul to Maplewood, you’ll see something unexpected at the corner of Hazelwood Street and County Road C. There, 16.5 acres of land, nine of which are tillable, have been subdivided into 1,150 garden plots where 1,050 gardeners, mostly Burmese Karen and Hmong refugees, grow their favorite vegetables.

Eh Thee Paw, a member of the ethnic Karen community from Burma, has her own small plot there, a 15 x 30 ft. section where she cultivates peas, cucumbers and other vegetables that may or may not have English names. It’s her second year at the garden. She met me there, with her young daughter Fancy Sunny in tow, to show me around.

Paw was born in Burma but spent much of her life in a refugee camp in Thailand before coming to St. Paul. “I had decided to go to school and study here, but after a year, I got married and started working,” she says. Her newly born son, Joseph, is keeping her busy as well and now stays home with her kids.

She shows me the vegetables she’s growing, like one she calls a morning glory (not the flower but a poisonous vine) and the myin khwa (it’s pennywort, I think). Every section has at least a row of brightly colored hot chili peppers. There are roselle plants, to make iced hibiscus tea, saw plants (coriander), zucchini, and chin baung (sour leaf)—a slightly sour spinach-like green growing nearby.

“In Burma, if we cook something, we put this in,” Paw says of the chin baung. “The Karen like sour flavors. We like very hot food, too.”

The garden plots, along with water and gardening tools, are offered free of charge, part of a project by the nearby First Evangelical Free Church, one of five East Metro churches sponsoring garden space for refugees. Now in its fourth year, First Evangelical’s Harvest Community Gardens is a huge success, run entirely by nearly 70 volunteers and funded completely by donations. Immigrants hear about the gardens through their local ethnic community organizations. Paw learned about it from the Karen Organization of Minnesota’s farming program coordinator, See Nay. The Karen make up only about 10 percent of Harvest Community gardeners, with 80 percent Hmong and the rest tended by members of the church.

Jon Addington, Coordinator of Harvest Gardens, says that when the church officially launched the garden project in 2010, he never expected it to grow into the success that it is today. “We had purchased the land from a real estate developer who had bought it in the 1960s to build houses. He never built. He grew corn on it and sold the corn on the corner.”

The church was going to use the land for buildings, but the parcel ended up plowed and planted. “The first year we had 300 plots with 150 gardeners. The second year, we expanded and had about 475 people. Last year we had 625,” he says.

Addington says that it’s important to understand the motivation of the church to build this garden community. They do not require the refugees to join the church, but said members wanted to build a bridge to the their immigrant neighbors.

“That was our original motivation, and it stays that way.” But, he says, the church wanted to demonstrate God’s love to people around them by feeding the hungry and helping immigrants. The garden includes four larger sections where church members grow vegetables to donate to the Salvation Army Food Shelf and to the Ramsey County Family Services Center, a homeless shelter for women and children.

Paws’s cucumber plants are just beginning to flower and will soon be producing juicy cucumbers. “Sometimes we just wash them and eat them. Or cook them with chicken and hot peppers. It’s very good,” she says.

As in years before, corn still grows on the land, a popular vegetable for both Karen and Hmong. “We eat it on the cob or fried,” Paw says. The Burmese puts the corn in soups and makes a simple salad made from grilled corn, cut from the cob and mixed with vegetables.

“In Burma,” Paw remembers, “we lived in the jungle or in a village. People would have big gardens. It’s hot there. There’s no winter, just rain.” She comes several times a week to her Minnesota garden plot, more often when she has the time. “This garden is special,” she said. “The garden makes me happy.”

Corn is a popular vegetable, cooked a variety of ways—including on the cob

A sign on each plot indicate the gardener who farms it

The gardens stretch out in all directions

Tools are available to all gardeners without cost