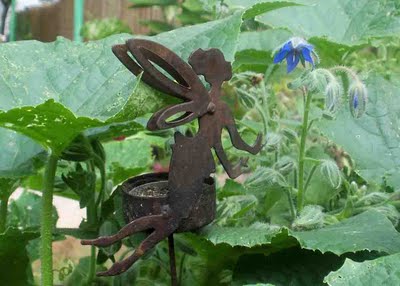 Above: Beneath that mound in the backyard garden lies some very creative destruction.

When we moved into a modest 1927 bungalow on Fifth Avenue some 20 years ago, we picked what appeared to be the best location for a garden, and were pleased to discover that the spot boasted a rich humus that nurtured a vigorous crop of vegetables, even before our first compost pile was ready to use. Occasionally, we would push a shovel into the ground and turn up a steak bone or other remnant of somebody’s long-ago supper.

So we weren’t too surprised when one of our old-timer neighbors told us that Mrs. Nelson, who lived in the house from the time it was built until about 1980, used to bury her garbage in the backyard. Apart from the occasional bone, the only evidence of this long-ago practice was the richness of the soil that invigorated our vegetable garden.

I remembered that old garden last fall, after reading about “deep composting” in Thomas Powell’s little newsletter, The Avant Gardener. Powell described the “new” practice of burying compostable materials rather than amassing them in piles, also known by the German term hugelkultur, which means “mound culture.” It seemed a lot like what Mrs. Nelson used to do, which led me to investigate further, and now I have a small mound in my backyard, awaiting spring and the next phase in my hugelkultur experiment.

What’s different, if not truly “new,” about hugelkultur, is that it offers a way to compost woody plant materials that you wouldn’t ordinarily bother with in your compost pile, because they take seemingly forever to break down — things like tree branches and shrub trimmings, sunflower stalks, squash vines, corncobs and the like. Even heavy logs will eventually decompose after being buried underground. In constructing a full-blown hugelkultur mound, enthusiasts will use a front-end loader to do exactly that, burying logs large enough to build a cabin with. But not bones or meat scraps — as our backyard excavations attest, bones remain intact for decades (and such animal remains may attract unsavory critters, as well as an astute representative of the City inspections office).

Modeled after the natural process of decomposition that takes place in the woods, hugelkultur has caught on with folks in the permaculture movement. Consider how a fallen tree trunk rots, becoming host to lichen, moss, mushrooms, and then more green growing things. Such mini ecosystems last for many years; they foster valuable mycorrhizal relationships between plants, soil and fungi to facilitate the exchange of nutrients, and promote healthy moisture levels.

With hugelkultur, you bury those tough-to-compost materials under mounds of softer compostables and soil. The chunkiness of the buried materials also creates air pockets, which, say hugelkultur advocates, are good for roots. You don’t have to wait for the buried matter to decompose, either; you can plant as soon as you’re done building it. In this way, hugelkultur is similar to no-till gardening, in which a raised-bed is established by first covering the sod with multiple layers of newspapers, then piling soil on top, then planting. By the time the roots reach to where the lawn was, the newspapers and grass are well on their way to becoming nitrogen-rich compost. 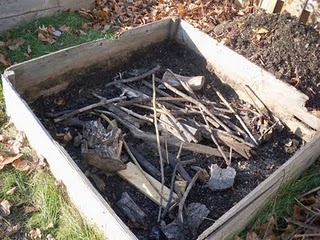 I decided to make a hugelkultur mound in my backyard last November, so that it would be ready for planting early in the spring. I dug into one of my existing raised beds, piling the soil off to the side, until I had a depression about eight inches deep, then looked around for woody materials to bury. I fished out the logs from the bottom of the firewood pile, which had sat too long on the ground and were beginning to rot (“Great! A head start!” I thought), added pieces of a dead branch we removed from the Norway maple tree but never got around to burning, the sunflower stalks that are almost as tough as tree trunks, the spindly sticks from pruning the spirea hedge, and the squash vines from atop the compost pile, which had become a fibrous mass of tangles. The pile was now an unwieldy mess of twiggy matter, so I stepped into the middle of it and stomped around a bit to break things up and pack it all down.

In went some leftover segments of two-by-fours I found in the garage, but not the scraps of cedar fencing we had scavenged from a friend (the larger pieces of fencing frame our raised beds), because rot-resistant wood like cedar is, well, resistant to rotting. I would have also omitted black walnut, if I had any, because it’s allelopathic — it prevents other plants from growing. 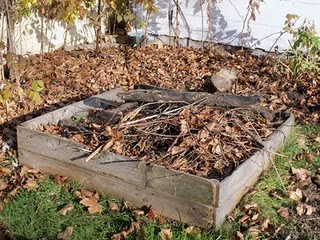 Some time ago, a Master Gardener warned me that wood chips will draw nitrogen from the soil at the beginning of their decomposition process, so I added some organic fertilizer and plenty of green matter in the form of weeds and whatever was lying on top of the compost pile, for good measure.

That may not have been necessary. Toby Hemenway, author of Gaia’s Garden: A Guide to Home-Scale Permaculture (Chelsea Green, 2009), doesn’t think this is a problem. “I suspect that the wood decomposes so slowly that very little nitrogen is bound up by the microbes gnawing at the logs,” he writes.

The rest of the partially finished compost from one side of our two-bin system went onto the growing heap, and I topped it all off with the soil I had removed at the beginning. I stepped back and admired the mound, which stood about three feet high at the center. 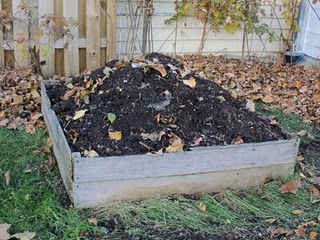 It will take years for the woody stuff at the bottom of all that to decompose, but it should make an excellent bed for squash and other sprawling vegetables in the meantime. Several gardeners say that berries of various kinds thrive in the mounds, too. And hugelkultur practitioners claim that these beds heat up in the spring because of the energy generated by the subterranean decomposition taking place, offering gardeners a head start on the season. I don’t know if my mound is large enough to generate any heat — it’s about four feet by four feet — but I’ll be watching for that this spring: I’ve got a soil thermometer and I’m prepared to use it.

At any rate, I know my husband will be happy if I stop tossing the spirea trimmings and squash vines into the compost — he complains about them getting tangled in the pitchfork when he turns the pile. Now, instead, when I prune the shrubs this summer, I’ll look for a spot to start a second hugelkultur mound. Mrs. Nelson would surely approve.

(Editor’s note: This article first appeared in the spring 2010 issue of  MOQ. The backyard referred to here is the author’s former residence.)