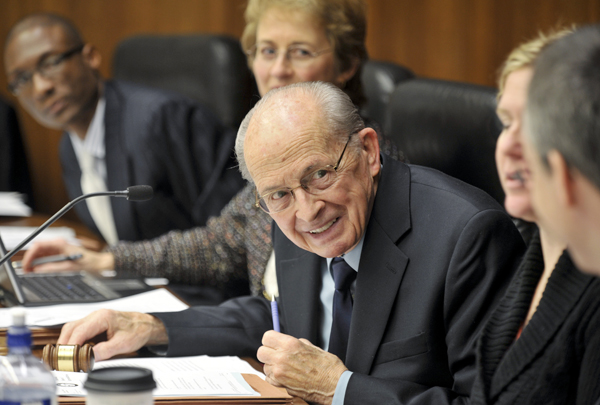 Want people to know you are a graduate of the College of St. Benedict? There’s a license plate for that.

How about showing your love for Minnesota’s habitat? There are plates for that.

What about displaying your purple pride? There’s no plate for that yet, but the idea is being floated as part of a funding mix for a new Vikings stadium.

Depending on how you count them, there are about 74 types of special motor vehicle plates available displaying everything from college logos, the state flower to citizen-band radio call letters. In fiscal year 2009, 65,367 special plates were issued, and the total number of vehicles registered with special plates was 513,035.

It’s a situation that the chairman of the House Transportation Finance and Policy Division thinks has gotten out of hand. Rep. Bernie Lieder (DFL-Crookston) is just as proud of his military service as the next veteran, but is a plate needed for every branch of service, nearly every medal or every war? He doesn’t think so.

If he had his way, people would display their pride with bumper stickers, and the only vehicle plate available would be the generic Minnesota blue and white plate. This isn’t about the personalized plates, as these have only letters and numbers, he said. It’s the graphics on the specialty plates that are a problem.

“It’s a safety issue,” Lieder said. “The plates have so much on them that you can’t read them.” State statute requires that a plate can be read from a distance of 100 feet.

State Patrol Maj. Michele Tuchner agrees. “At a hit-and-run or with a gas drive-off you only get a moment to identify the plate, and sometimes it is hard to identify even the state because you could be distracted by the graphics on the plate.” She said that years ago, most states had only one plate, and “you could tell right away which state (it was from).”

Lieder sponsors HF3524 that would spell out criteria for issuing special plates and provide a process for mothballing plates that have few takers. Ironically, it also expands the eligibility for the Combat Wounded license plate to a Purple Heart recipient who is still serving in the military, rather than just veterans. It awaits action on the House floor. The companion, SF3232, sponsored by Sen. Steve Murphy (DFL-Red Wing) awaits action by the Senate Transportation Committee.

Lieder’s feelings about special plates are so well known around the Capitol that he said some members try to bypass his division with their plate requests and stick them in other omnibus bills. Even the governor has proposed special plates.

“I don’t want to be a dictator, but there is a process that should be followed,” he said.

But how do you say no to special plate requests from the American Red Cross, Special Olympics, square dancers, junior golf, the Minnesota Twins and especially veterans groups?

It isn’t easy, Lieder said. “It’s an emotional issue for those involved with the group.”

There’s the matter of economics with special license plates.

Specialty license plates generate money for the organization or agency sponsoring the plate.

For instance, there are more than 128,000 critical habitat plates positioned on Minnesota vehicles. Each plate generates a $30 annual contribution to a special Department of Natural Resources fund. Since 1996, the plates have generated approximately $18 million.

Debuting in December 2005, the approximate 33,000 Support our Troops license plates have brought in about $420,000 for a special military families and veterans fund.

But there are other beneficiaries from plate proceeds. For instance, the approximate 2,835 license plates issued for the various colleges require a minimum $25 annual contribution to the college’s scholarship fund from the purchaser.

While Lieder hasn’t seen a specialty plate proposal as of yet from the Vikings, he speculates they are banking there are enough fans out there willing to spend a little extra for a new stadium.

“The genie is out of the bottle,” said Rep. Terry Morrow (DFL-St. Peter), who likes specialty plates and has three requests, including one to “Support Highway 14.” The plate would draw attention to the upgrades needed on the road that runs through his district. Funds generated from the sale of the plate would go into a fund for the road’s reconstruction. Morrow’s bill, HF2573, awaits a hearing in Lieder’s division. Its companion SF3077, sponsored by Sen. Kathy Sheran (DFL-Mankato), awaits action by the Senate Transportation Committee.

Morrow, however, understands Lieder’s frustration, but thinks there can be some middle ground on the issue. He says the public safety issue is valid, but that could be addressed with stricter criteria for the plates.

Who picks up the tab?

Another rub for Lieder is that the state doesn’t recoup its administrative expenses for tracking and expending the money to the beneficiaries.

Manufactured by MINNCOR Industries, a prison inmate work program, the production, manufacturing and delivery cost of each set of plates is $6.18, the same as a regular license plate, according the Lieder.

Current law requires a plate request be submitted to the Department of Public Safety Driver and Vehicle Services Division along with a $20,000 fee to cover the application review and plate development. However, Lieder said that there are ways around the process and the fee – that’s through legislation. His bill would tighten the requirements and require a report to the Legislature about a new plate, if it is approved.

The bill also clarifies procedures for retiring plates, and Lieder plays no favorites. The plate benefiting the University of Minnesota, Crookston, located in his district, is an example of one that should be retired, he said, because there are only five plates in service.

The law allows the public safety commissioner to discontinue special plates with fewer than 1,000 sets registered, but Lieder said he’s not aware of any that have been discontinued. It also clarifies that the discontinuance applies to future issuances of plates and duplicates, so that people already having a discontinued plate can keep it on their vehicle for the remaining normal length of time (typically seven years total).

Several plates besides the University of Minnesota Crookston have fewer than 10 in use. They include:

• College of St. Benedict; Saint Mary’s University of Minnesota- each with 3;