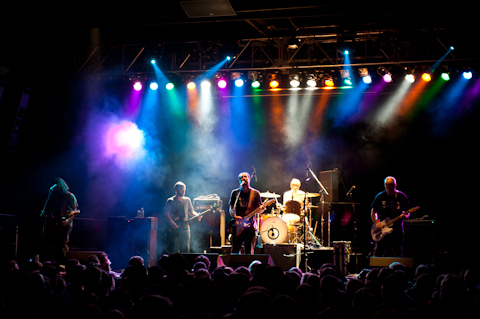 Built to Spill entertained a swarm of nostalgic Minneapolis indie-rock fans at First Avenue on Wednesday, Sept. 19. The group, led by guitarist Doug Martsch, hasn’t put out a full-length studio album since 2009, but kept an excited momentum going by sampling their extensive catalog, filled with nearly 20 years of material.

While not entirely sold out, First Avenue was host to a decently full house made up of many different generations of Built to Spill fans. Being a successful indie band for 20 years means, the fan base is broad, to say the least. The audience seemed to be equal parts 20s, 30s, 40s and 50s which makes sense considering the band’s lasting relevance in the pseudo-underground rock and roll scene. It became kind of a game to pick out the separate phases of Built to Spill by watching which fans went ballistic when Martsch strummed the opening chords to a given song. Were they the younger, air guitaring head bangers or the middle aged head nodders who brought their sparkly-tank topped wives to the show as an anniversary present to themselves?

The primary group seemed to be most invested in the early material from Built to Spill’s second album There’s Nothing Wrong with Love. If we’re being completely honest, I am incredibly biased toward this album as it got me through the trials and tribulations of navigating the cruel 8th grade hallway. Regardless, songs like “In the Morning” and “Twin Falls” were amazing crowd pleasers while the encore boasted a severely romantic (almost chillwave-esque?) cover of the Tommy James and the Shondells hit, “Crimson and Clover.” Martsch, an seemingly down to Earth Idaho man, dialed in to Minneapolis’ humble, Midwestern attitude by responding to the audience’s loud approval with a casual “Aww, thanks.”

Martsch also referenced the band’s past when he asked the crowd if it remembered when they were playing at the 7th Street Entry. A loud-enough applause suggested it did. In a time of new bands that came from old bands (I’m lookin’ at you, Stephen Malkmus and the Jicks, Noel Gallagher and the High Flying Birds, Divine Fits, etc.), Built to Spill is sticking to their roots. It’s comforting that a band can stay together for so long without letting egos or just the passing of time get in the way of their ultimate goal: producing art with their friends. It’s almost comparable to your one friend whose parents have been married for about a million years and are still madly in love. You forget that it’s possible, but when you see it with your own eyes, it makes you feel all warm/fuzzy/nostalgic, similar to the feeling produced by looking at too many Instagram photos. Be warned, venturing down that old Built to Spill road will make you quietly happy and sentimental.