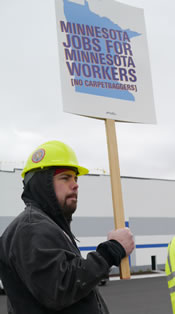 Building Trades members, who face massive unemployment, protested the use of a California contractor.

Union members protested Wednesday at the site of the nearly completed, $15 million distribution center in an industrial park in Rogers. They carried signs and chanted, “Minnesota jobs for Minnesota workers!”

HCMC’s alliance with Illinois-based Medline, maker and distributor of more than 125,000 health-care products, is behind the construction, the Building Trades said. Medline signed a prime vendor agreement with HCMC in May and is building the Rogers facility to service HCMC. Panattoni Construction, based in Los Angeles, is general contractor.

It’s ironic that Minnesota workers support HCMC through their health plans, yet see work related to HCMC go to people from outside the state, said Rob Snider, president of the Minneapolis Building & Construction Trades Council.

“We’d like to think that [when] our members are paying into a health plan where they go and spend thousands and millions of dollars on health care, that they ought to be able to put the building up for the products they use when they’re sick,” he said.

Hennepin County Attorney Mike Freeman told participants in the rally that, as far as he can tell, no law is being violated. But the spirit of the law is being broken, he said.

“If there is no public money in the construction, then the county and the state really don’t have hopes to go to court to try to force prevailing wages. Prevailing wages only work when there is public money in the contract,” Freeman said. But “if you build something here, you hire Minnesota workers. They’re well-trained, they do a good job – a good job for a decent day’s pay.”

Using out-of-state workers “makes no sense at all,” he said. “A Minnesota worker has to go to Montana for work and you have people from Ohio and New Jersey coming here.”

“We made the mistake of thinking this distribution center might improve our health and welfare someday,” he said. “But the reality is that it’s making many of our members feel sick about still being out a job.”

Added Snider: “In a construction industry that’s been hard hit – almost three times the unemployment rate for the average here in Minnesota – we’re looking for any way we can put construction workers back to work.” 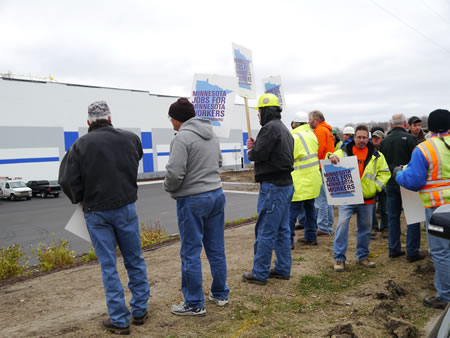 The rally drew members from many different Building Trades.