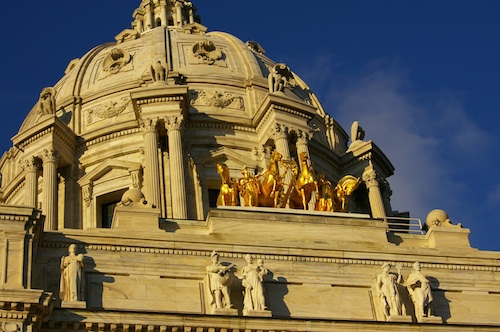 Governor Mark Dayton and the Republican leadership announced at press time that they had reached a deal to end the Minnesota government shutdown. Christina Wessel at Budget Bites has an analysis of what this will mean, including not only the one-time income agreement but also the spending cuts that will be part of the deal.

There was a new step in the ongoing discussion of how Minnesota will meet its needs over the next two years. At stake are decisions that will have a profound impact on the state’s future quality of life and economic vitality.

On Thursday morning, Governor Dayton announced an offer that increases the size of the shift in payments to school districts, borrows $700 million from the future through tobacco bonds, and reduces funding for vital public services by more than $2 billion. Here are the major elements of the proposal:

That leaves $2.2 billion in spending reductions. The details of these cuts are not specified in the current offer. However, earlier in July, Governor Dayton released a document that sheds some light on how more than $2 billion in cuts could be distributed among the areas of the state budget:

The one detail in the Governor’s offer is that these spending reductions cannot include the Legislature’s proposal to decrease the state government workforce by 15 percent by 2015. If you are looking for more information on the potential impact of $2 billion in cuts, our recent analysis of the Governor’s and Legislature’s budget proposals discusses the cuts that were on the table during the legislative session.

The Governor’s offer also calls for a $500 million bonding bill, and specifies that the final budget deal would not include either the Governor’s tax proposals or the Legislature’s policy proposals.

If the Legislature accepts this offer and the details can be worked out, the Governor says he could call a special session within three days.