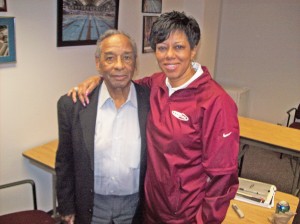 Someone recently told me that people sometime confuse Jimmy Robinson for Jimmy Lee. We asked Jimmy Robinson to talk about his career and help make the distinction clear.

“Jim Lee was a very flamboyant type of official,” says Robinson. “When he made a call, everyone wherever you were knew what the call was, whether it be the people at the scorers’ table, the coaches or the players. Back in those days, they didn’t have set [officiating] signals like they do today, so Jim had his own — and his own by far were the best.”

Unfortunately, Robinson points out, “[Lee] never, ever got the opportunity to go to the Division I football and basketball. I believe he did work Gopher baseball games. Yet everyone wanted to work with him, and I’m referring to White officials, because back then…you never saw two Black officials on the game or on the floor at the same time.”

Nonetheless, Lee paved the way for other Black officials who came after him, including Robinson, who started officiating in 1956 and later worked Big Ten games in the 1970s, joining “the second group” of Black officials including Tommy Rucker, Jim Eddy, Bob James and Art White.

“Bob James came down with cancer his second year in the Big Ten and died. Tommy Rucker went on to work several Final Fours,” says Robinson.

Robinson, who became the first Black official to work a state high school basketball tournament, knew Lee since his teenage days growing up in St. Paul. “I never, ever thought I would be a basketball [and] football official. I thought that some day I would be a lawyer and wound up being in education,” he admits.

“At one time in my career, I was considered the number-one official in Minnesota. I got the cream of the assignments. I worked Division III and II [games] before I worked in the Big Ten. I worked 16 years in the Big Ten [1971-87].”

Robinson says of Lee, “How we really crossed paths was when I started working high school basketball games in 1956. He would always tell me, ‘Jim, you just go out there and you just do the best you can, and don’t worry about nobody. Know what you are doing. Know the rules, and you will be fine.’”

Lee also told him to be in the best position to see the play. “He told me you have to learn how to backpedal down the floor,” adds Robinson.

“I was an outsider” as a Big Ten official for obvious reasons, Robinson recalls; there was an unwritten rule that Black officials weren’t welcomed. He also often had to deal with unrealistic thoughts among Black players who constantly asked Robinson to “give us a break” when making calls during games simply because they shared the same skin color.

Lee also was able to give Robinson advice and consul whenever needed. “He had foresight enough to know how you would be treated or could be treated,” remembers Robinson.