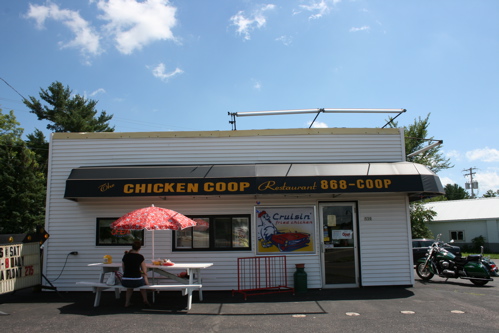 Sometimes it’s simply exhausting to live in the country that consumes more fossil fuels than any other. One must constantly fill up one’s cars with gasoline to drive to one’s friends’ cabins in Wisconsin, which those friends must maintain with further massive expenditures of natural resources. And when one thinks of the energy required to supply the gas stations with junk food alone, not to mention gas, why, it’s staggering. As the bumper sticker says, “I’m changing the climate — ask me how!”

On the several ecologically reprehensible Wisconsin road trips we took this past summer, Bruce has indulged in his usual pairing of beef jerky with Diet Coke, because, as he says, “It’s so GOOD.” We always get some cheese curds, too, because the cheese curds in Minnesota just aren’t as squeaky, I don’t care what they say. Recently, however, we actually stopped for some sit-down lunches along Highway 8 en route to our relatives’ cabin near Ladysmith. One stop was in a town called – get this! – Bruce. If your name is Bruce, there are lots of fun photo ops, which we have taken ad nauseum on previous trips. We pulled in at The Chicken Coop, a little box of a building that had looked abandoned in the past few years but now appeared to be hopping, as you can see by the signage.

One approaches such places with trepidation, not knowing whether it’s going to be the most delightful food you’ve ever eaten or something scary and possibly deadly. Mira and I were drawn to the “stuffed hash browns,” and Bruce ordered the barbecued chicken. Despite the cheery, chicken-themed plaques (“A chicken crossing the road is poultry in motion” and the like), we were a little apprehensive. But lo! The stuffed hash browns were the absolute Platonic ideal of hash browns! Stuffed with the freshest of tomatoes and green peppers, which I usually don’t even like associated with potatoes of any sort, the cheese a light and deeply flavorful cheddar, the potatoes grilled to perfection! Oh, what I would give for a plate of those right now. Mira and I split one order and it was plenty, which also made it an incredible bargain at $5.29. Bruce said the chicken was yummy, too, and made a refreshing change from a wad of beef jerky.

Since there were only a few people there and the joint is tiny, the owner, Dorothy Hanson, couldn’t help noticing that one of her customers was snapping photos of the food in a suspiciously foodie sort of way, and she came over to tell us the Chicken Coop story. One fine day in 1992, her husband Albin came home and said, “We’re going to buy that place that used to be The Viking Burger.” Dorothy replied, “Whaddaya mean, we?” She had no interest in what she said looked like a run-down chicken coop. “That’s it!” exclaimed the intrepid Albin. “We’ll call it The Chicken Coop, and we’ll serve chicken.” Such is the entrepreneurial spirit of the Brucian. (Brucer? Brucite?) The rest was history until Albin passed away some years later. Dorothy carried on for awhile, but she got dispirited and closed down in 2001. It stood empty for eight years. Then her daughter Karen said let’s DO this thing!, and they reopened last year, to wide critical acclaim.

If you’re on your way back to the Twin Cities after eating at The Chicken Coop, you probably won’t be hungry when you pass Eichtens Cheese and Bison (where you’ll want to stop purely because of the enticing moniker). If you’re on your way eastward from the Cities, however, Eichtens will be the first place you pass where you’ll say, isn’t it time for a little jerky and a few curds? We used to stop there when the kids were little because they had a petting barn and bison standing around, plus a giant statue of a mouse holding some cheese. Now it’s a tad more upscale, with a nice little restaurant (which was pleasantly crowded when we stopped there for a bison burger on a rainy afternoon), an antique store, and lots of tasty snacks.

The moral of the story is, why aren’t there passenger trains? There are plenty of railroad tracks between here and everywhere, even along Highway 8. Imagine a relaxing, meditative train ride from St. Paul to Bruce, Wisconsin, hopping off the train for a bite of stuffed hash browns, strolling about, then catching the 3:45 to Ladysmith. That way you wouldn’t be such an environmental disaster. Or would you? Oh, forget it.