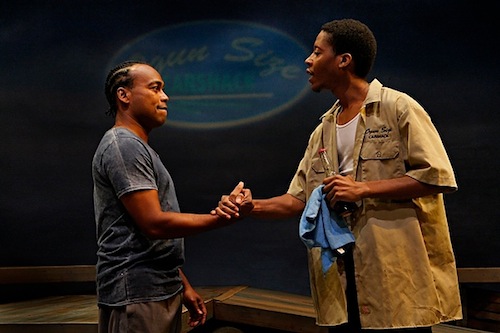 This reality of the prison-industrial complex provides the backdrop of Tarell Alvin McCraney’s play The Brothers Size, a co-production of Pillsbury House Theatre and the Mount Curve Company presented by the Guthrie Theater in The Dowling Studio. This reality permeates the lives of all three characters—two of whom have been recently released from “the pen,” and all who know racial profiling all too well in their daily lives.

At the center of the story are two brothers: Ogun Henri Size, played by James A. Williams, and Oshoosi Size, played by Namir Smallwood. Ogun is much older than Oshoosi and acts as a father figure, chastising him for sleeping in late, enticing him to get a job, and finally offering him a position at his garage. The brothers bicker with each other, but clearly they also care for each other too, with Ogun trying to keep Oshoosi in line, and Oshoosi, with his sweet demeanor winning over his brother’s affection.

Gavin Lawrence plays the third character, Elegba, who acts as a catalyst for the events of the play. Like Ogun and Oshoosi, Elegba’s name comes from Yoruba mythology, where Elegba is known as both a messenger and a trickster. In the play, he is certainly the wiliest of the three characters. Where Ogun is the pillar of strength and fatherliness (in a stoic and compelling performance by Williams) and Oshoosi is vulnerable and spiritual, Elegba is passionate, joking, and at times dangerous.

Lawrence gives a fascinating and extremely physical performance. His expressive face changes by the microsecond, revealing layers of subtext beneath his bravura.

The play leaves more questions than answers, and ends with a cliffhanger that leaves you wondering what happens next. If you didn’t see In the Red and Brown Water, as was the case with me, you may be also wish that Pillsbury House would bring that show back so that you can get filled in on some of the back story, though the characters do some exposition, and there’s a handy family tree in the program.

One of the main themes of the play is love. There’s Ogun and Oshoosi’s brotherly love toward each other, which is also a father-son type of love. Then there’s Elegba’s love of Oshoosi, which in Lawrence’s portrayal is rooted in a deep desire and almost carnal longing.

Oshoosi’s feelings for Elegba are not so clear in Smallwood’s portrayal. At times he almost seems afraid of Elegba, though clearly he also cares about him as well. Smallwood’s Oshoosi is rather ethereal, and seems to hover above his emotions, connecting with the spiritual world more than the other characters.

There are certain moments when the actors break out of the main action, such as in a dream sequence where song and movement overtake them, stomping on the ground in rhythm with Ahanti Young, the drummer who also provides accompaniment and sound effects throughout the whole play. Young’s performance adds a great deal to the play, although the dance elements are rather incongruous.

As for McCraney’s script, it is a mix of poetry, gritty realism with a sprinkle of Brecht thrown in. The actors announce the stage directions, pointing out to the audience when they are looking down at the ground or staring into the other character’s eyes. It’s an interesting convention that highlights, rather than diminishes the body language of the characters, and it works surprisingly well with the realistic portrayals of the characters, even when McCraney throws in metaphor and images that elevates the language.

Director Marion McClinton and the cast ought to be commended for their work in this excellent production. Though the ending feels unresolved, it definitely will pique your curiosity about the final installment of the series.