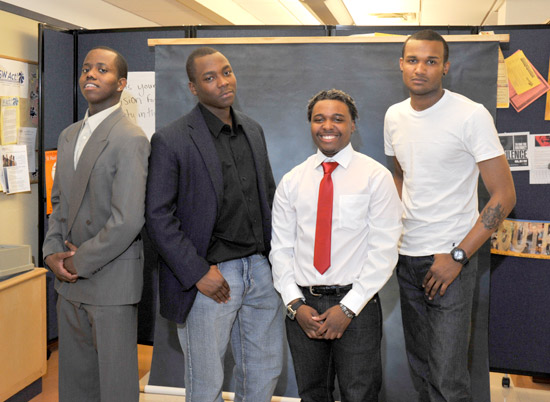 A program in St Paul has made its mark in teaching students professionalism, while providing a support system with collaborating work ethic.

Brotherhood Brew, a division of Brotherhood Inc., is a non-profit organization for African-American males, age 16-24, who have been involved in the criminal justice system, or are at risk. Brotherhood is an innovative social enterprise that provides comprehensive coffee services to businesses, nonprofits, government offices, educational institutions and individuals in the Twin Cities. The men are trained in sales, customer service and business skills.

“We teach life skills, as well as offer in-house employment opportunities for the young men in the program,” said Nakima Levy-Pounds, board chair of Brotherhood Brew.

Levy-Pounds said many job training programs in Minnesota take initiative, but lack in follow through.

“One of the things we found in the Twin Cities, is there are a number of programs that offer job training skills, but very few that offer actual employment opportunities,” said Levy-Pounds.

Kerry Johnson, a Brotherhood Brew student, was enrolled in the program with the help of his probation officer. As Johnson filled out the application for enrollment, skepticism took hold.

“I’m thinking what if I don’t get called, so many people applied,” said Johnson.

Johnson was one of the first people to get interviewed. “That was the grace of God because I did pray for it,” said Johnson.

Johnson is currently the director of communications for Brotherhood Brew. Some of his duties are to organize the organization’s Facebook and Twitter pages, provide customer service for the group’s breakfast club, write thank you letters and more.

Sidiq Abdullah reluctantly became a program participant this past December.

“I was working with Ramsey County Workforce Solutions and my case manager, Julie Baker, referred me to the program,” said Abdullah. “I admit I was not enthusiastic of checking out the program at first, but I did anyway.”

Part of the skepticism for Abdullah was the program being similar to others in his past, where one learns skills but never get the chance to use the skills.

“I only went (to Brotherhood Brew) once a week because I thought it would be like other programs, where they teach us skills, but it does not help or change anything regarding my employment,” said Abdullah.

Levy-Pounds said providing one with skills but not opportunities is almost as bad as not providing skills at all.

“There are a number of barriers that young people face when trying to gain employment, especially if you have a spot on your record. We wanted to do something different and create job opportunities. That led us to start this company,” said Levy-Pounds.

Phalen Pounds, Case Manager at Brotherhood Inc., said that the men were very unsure of what to expect when they first entered the program.

“The fact they saw we were consistent and straight-forward in our approach, goals and expectations, drove them to be more confident and aware of their skills,” said Pounds.

Those skills include public speaking, networking, making promotional videos for the company and producing a play put together by Brotherhood, “The Forgotten: A Look at the Lives of Young Black Men.”

“We opened the eyes of so many,” said Johnson. “(People) hear about the disparities that exist being a young black male, but they have never experienced or seen any of it firsthand.”

In August of this year, Abdullah represented Brotherhood Brew by presenting a seven minute business pitch in front of a live audience on behalf of the company, which was a finalist in the Mosaic Social Entrepreneur Cup.

“He went up against people with bachelors and masters degrees,” said Levy-Pounds.

Brotherhood was the first runner up in the competition in which they won $5,000 and 20 hours of consulting services through Social Venture Partners.

“This was the first year African-American organizations made it to the finals,” said Levy-Pounds.

Johnson not only sees Brotherhood Brewery as a positive place for work, but as creation of an image not seen every day.

“Phalen is a good mentor,” he said. “Seeing an older Black male who has been to college, settled down, raised a family; it gives you a sense of confidence and lets you know things of that nature are obtainable. You don’t find positive role models in the streets, so you have to create your own path.”

The students at Brotherhood also develop a permanent position within the company through training.

“Through this process, we want to have committed young men. As this company grows, we put these young men in positions where they will eventually have a career,” said Pounds. “You are more than what they tell you, you are in the streets. You are more than just a statistic.”