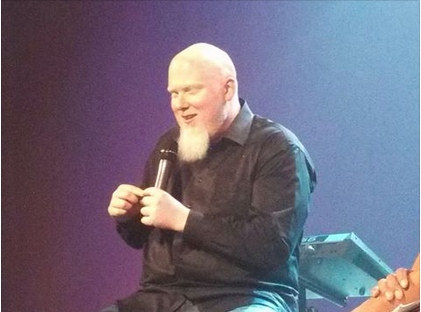 Last night I attended the taping of MN Original and TPT’s new series The Lowertown Line, a program that features in-studio concerts and interviews with local musicians. Dessa is the host, although her portion of the program had been recorded earlier, so we didn’t see her last night. Last night’s featured artist was Brother Ali. Apparently tickets for the event were gone within half an hour. (Tickets were free and announced via MN Original’s Facebook page.)

To set the stage, the event included a live audience of about 200 people. The studio felt intimate, except for the cameras everywhere. The event was interactive in that audience members could ask questions via text (well really through the website) and could vote on encore selections. Also Brother Ali has an engaging way of making the audience feel right at home—explaining that it was our job to applaud like crazy even if the performance was terrible, because we’re in this TV thing together and we’ll all be on the show!

Brother Ali is an impressive speaker and musician. His warmth, his ability to draw people in and his music provide a solid platform for introducing people to Islam and inviting people to look at the world in a new way. He played seven songs. The first five were selected based on the interview he had with Dessa prior to the show. As he said himself, these aren’t party songs. They are commentaries on life as we know it. The two encore songs were selected by polling the audience.

The set started with “Mourning in America.” It’s a bleak song about war overseas and war at home. About being unprepared with schools that “already failed you,” “boys in blue” who nail you and a “climate of overriding violence.” Accompanying the band on stage were three Muslim dancers in full dress with polished Hip-Hop moves. It was a bright spark of optimism against the backdrop of dark lyrics. (You can see the video including the dancers online.) Brother Ali frames the juxtaposition explaining that things aren’t always as they seem that the dominant may be trying to portray a story that’s not entirely true. Inviting the audience to think more critically about what stories we want to believe and share.

Brother Ali wasn’t apologetic but did explain his latest shift to more political messages in his music. His goal is to entertain and tell the stories that he knows are important and I think he’s done that successfully. It will be interesting to hear if the new songs get as much air play as “I Love the Life I Live,” which is always a crowd pleaser. 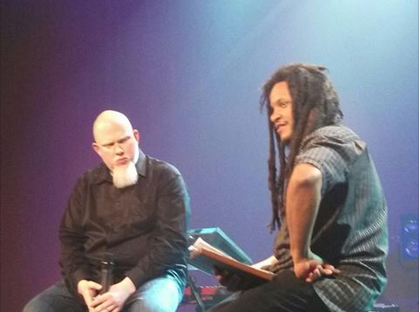 The show ended with an interview by The Current’s Kevin Beecham. Brother Ali talked about the price of freedom, which can be death. But he explained it really starts with using your freedom to stand up for people without power. It may cause discomfort those around you, it may make you uncomfortable, but that too is the price of freedom. He explained the importance Muslims put on personal dignity in respect to supporting people’s freedom to marriage, even if you might not fully understand their choice. He observed that while he didn’t understand wanting to marry a guy, he also didn’t understand wanting to marry a “mean ass woman.” Sometimes we have to allow ourselves to recognize that something is weird to us—although weird doesn’t mean wrong.

Again, he is an impressive speaker; he used questions from the audience as jumping boards to a whole range of topics ranging from Swedish tacos, to gay marriage, racism, attitudes of Islam, especially in the hood and his views on why the audience for the show was predominantly white. The show will apparently debut in Fall 2013.