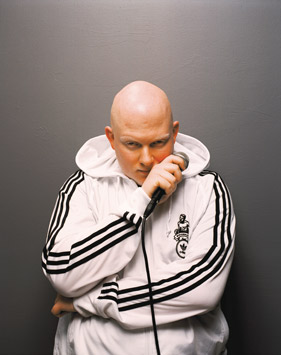 It’s Monday afternoon in a cold rehearsal space in St. Paul and Brother Ali is putting in work.

Ali is putting the finishing touches on his live band show. He’s got a 12:30 p.m. flight the next day – destination, Cape Town, South Africa. The Rhymesayers artist is playing the Cape Town International Jazz Festival. He’s on the bill with the likes of Jill Scott, the Robert Glasper Experiment, the Brand New Heavies and a host of others. Ali and his band are set to perform on show and Ali will also be a presenter during one of the festivals workshops.

Clad in all black – black Adidas, black jeans and a black hoodie – Ali is totally into the groove that his band, keyboardist, Devon Gray, guitarist Jeremy Ylvisaker, and DJ Plain ‘Ol Bill, is laying down. Randy Hawkins, the tour manager is adjusting various knobs on some sound equipment. Everything has to be just right. Time is of the essence.

The trip is an eight-day excursion with two days of travel to, and two days from Cape Town.

“It’s really a long way to go for 75 minutes,” joked Hawkins, referring to the length of Ali’s set.

Ali continues to spit lyrics. He run through “Freedom Ain’t Free” and discusses with the band how to transition to the next song. Something’s not quite right. Ali and Gray think the song is out of tune, so they change the key. OK, that’s better. Ali is once again at peace. Peace is a perpetual state of being for Brother Ali.

With everything to Ali’s liking, he presses on into the next tune, pushing the mic stand to the side and begins rhythmically pacing about.

Then Ali breaks into his unmistakable melodic flow. With his voice barely above a whisper, his soul is yelling out.

“Even with (President) Obama killin’ people with drones/I’m going to jail with Occupy Homes,” spits Ali, before instructing Ylvisaker to go into a guitar solo. He later goes into a verse about being homeless and sleeping on friends’ couches to chilling on the couch with political icon, Dr. Cornel West.

Ali briefly interrupts his rehearsal to offer a reporter a sparkling water. He’s being a gracious host. Then he turns right back to the band and they run through the haunting tale of love gone bad in “Walking Away.”

“I really wish we had one more day,” said Ali. “It’s good, but just want one more day to work.”

This is South Africa’s first taste of Brother Ali live and he wants everything to be just right. But conversation quickly switches from the show to going diving with sharks. Ali and good friend, Daniel Yang, are going to take the dive while in Cape Town.

“Daniel really wants to do it, so I told him I’d go with him. I don’t want to do it, but he’s excited about it,” said Ali. “I don’t need to disturb their (sharks) natural order.”

But if Ali’s friends want him to do something, he’s there for them.

Following the rehearsal, Ali journeys to a nearby sports bar and sits down for a bite to eat. While Ali is seated, a 20-something white guy walks past Ali and does a double take. The guy interrupts Ali’s conversation – but not rudely – and excitedly said, “I thought that was you. I’m a big fan. I love your music.”

Brother Ali smiles broadly, thanks the guy, shakes his hand and then continues with his conversation. A reporter asked how does Ali deal with fame.

A reporter reminds Ali that he’s famous enough to be headed to South Africa to perform in front of thousands of people.

“And maybe they know me, maybe they don’t,” said Ali, with genuine humility.

Chances are, they know him.

Brother Ali, born Jason Newman, has himself become somewhat of an icon. The 35-year-old hip-hop artist was born in Madison, Wisc. and later moved to north Minneapolis, with stops in several Michigan cities in between. Brother Ali, who converted to Islam as a teen, legally changed his first name to Ali.

“Only a couple of people in my family still call me Jason. There are a couple who have that Southern white attitude and refuse to believe I’m Muslim,” said Ali.

Ali is not the typical portrait of Islam. For starters, Ali is Caucasian. He’s also albino. In many ways, being albino lead to Ali’s Islamic conversion.

“Kids can be cruel and I lived in a lot of small towns and I got picked on for being albino,” said Ali.

But Ali said while in the 2nd grade an older African-American woman began to mentor him and began shaping his worldview. According to Ali, the woman explained that whiteness didn’t really exist.

“I just soaked it (African-American culture) up. There’s a particular texture to Black culture, Black love; Black strength,” said Ali. “Now I’m not trying to say that my experience with Blackness is the Black experience, but almost all the important people in my life, for better or worse, were all Black.”

In soaking up African-American culture, Brother Ali began rejecting the notion of his “whiteness.”

“White isn’t a skin color, it’s a sense of unjustified superiority,” said Ali. “Whiteness is a made up thing. God didn’t create it, but it doesn’t mean it can’t have a real impact on people’s lives. I don’t feel any loyalty to (being white) but I know socially, I’m considered white. White is a relative thing. It just means the top of the food chain. As a white person I practice racism every day if I want to or not.”

“He helped me to embrace my white brothers and sisters. Dr. West said, ‘You can’t lead the people if you don’t first love the people,'” recalled Ali.

Ali finished his lunch – a cheeseburger and fries, with a lemon-lime pop. His wife is waiting in a car outside. Ali is off to South Africa the next day.

“I wish we had one more day to rehearse.”