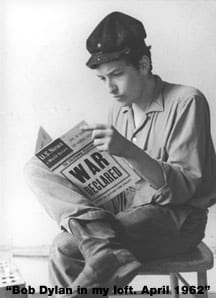 We’ve recently enjoyed a nostalgic resurgence of Bob Dylan—what with the release of his well-received autobiography Chronicles Volume One, and the Scorsese macro-music-doc No Direction Home. But what we haven’t yet seen is an exclusive photography retrospective like the one that’s about to land at Icebox Gallery in Northeast Minneapolis.

Young Bob is a unique exhibition of rare and unpublished photographs, along with images from the book of the same name by John Cohen. Cohen shot these pictures in the early 1960s, after a then-20-year-old Dylan left the confines of a stifled Minnesota upbringing for the promise of New York City. At the time, Greenwich Village was a convergence of young and enlightened artists.

“I watched [Dylan] as one of the many interesting young guys—and I was one of them, too—who were descending on MacDougal Street at that time,” recalled Cohen via telephone from his Putnam Valley, N.Y., home. “It was an incredible phenomenon—people came from all over the country and apparently it was the only place where things were happening.” Not only did Cohen capture Dylan on film, he also photographed Beat writers Jack Kerouac and Allen Ginsberg, as well as a myriad of other musicians and visual artists.

Dylan had heard of Cohen and knew him as a founding member of the band New Lost City Ramblers. NLCR played old time and Appalachian music, and were instrumental in shaping the folk music revival—steering it toward more traditional music styles and away from commercial acts. They rekindled an interest and respect for old time fiddle and string bands, and influenced a whole host of musicians, including Dylan and the Grateful Dead (John Cohen was the inspiration for the Dead song, “Uncle John’s Band.”). In 1959 NLCR were spotlighted at the Newport Folk Festival, and the band later received two Grammy nominations.

Cohen recalled the photo shoot that comprises Young Bob. “[Dylan] knew me and we talked some here and there,” he said. “Sing Out! [folk magazine] was going to do a big article about him, one of the first, and I think either he or they requested that I take the pictures, so he came over. He wasn’t famous yet, but the possibility was there. He might have been working on a [record] contract with Columbia, but he never mentioned it.”

The pictures were shot inside Cohen’s loft and on the rooftop of his building. He described his impression of young Bobby Dylan. “In my mind, he was like Woody Guthrie, reincarnated in a way, or the image of Woody. And there was something a little funny about him, too, a little Charlie Chaplin. And then while I was shooting him, I got this other image, a sort of James Dean thing, which I hadn’t thought about before. What’s most interesting is that the pictures that didn’t look that interesting to me back then, look very interesting to me now—some of the more anguished ones. I didn’t know he had that side, none of us did.”

Some of the images featured in Young Bob do reflect a contemplative and anguished artist, but many depict a fresh-faced Dylan whose playful, campy mugs for the camera project the happiness and confidence of someone who knows he’s arrived, someone who’s found a sense of camaraderie and purpose.

Cohen himself has left a legacy of Dylanesque proportions. In addition to music and photography, he’s woven aspects of filmmaking, teaching, anthropology and ethnomusicology into the rich fabric of his life’s work.

In 1962 he began making films as a way to blend images and music. He produced a series of field recordings of traditional musicians in their home settings of Kentucky, Va., and North Carolina, which led to his first documentaries: The High Lonesome Sound, The End of an Old Song and Sara & Maybelline: the Original Carter Family.

“The first film I did [The High Lonesome Sound] turned out to be a miraculous film,” he said, “because I didn’t know about filmmaking,;I just made a good film.” In addition to his work on traditional musicians, Cohen made films about black children in the Carolina Sea Islands and counter-culture street musicians in Berkeley, Calif., and New York. He has also spent decades photographing, recording and filming a group of indigenous mountain people in Peru.

“Up in the Andes there is one very remote, isolated group called Q’eros,” he explained. “Way back in 1956 and ’57 I did my masters thesis at Yale art school, and I went to Peru to look at their weavings. That led me to these people, who are very old and special. From there I learned about their music and their whole lifestyle. I’ve been to visit them 10 times, and I’ve done three or four films there. I was just there in September re-photographing a guy who I first photographed 50 years ago.”

Images of the Q’eros and the Appalachian musicians are well represented in his book “There is No Eye,” and Cohen said he’s working on another book about Q’eros textiles.

Cohen said he’s been to Minneapolis before, and sees this trip as a reunion of sorts. In addition to the opening at Icebox Gallery, he’ll play a concert with the “New Lost City Minneapolis Ramblers” at Mayslack’s on May 11. Joining him will be Spider John Koerner, Tony Glover and Paul Metsa. “I’ve got friends [in Minneapolis],” he said, “some of the people who are playing. It’s a reunion of all of these friends from before the ‘Prairie Home Companion’ even existed.”

As for the Minneapolis exhibit, Cohen said it’s the first one to showcase only his Dylan material. “I think this is the first time there’s been a show of just Dylan photographs and it’s not his famous period, it’s young Bob,” he said. “I’ve given Howard [Christopherson, Icebox Gallery owner] some things to hang up that have never been seen before, and there’s even more that I couldn’t show. There’s pictures of Dylan and his family, but that’s private so we don’t show that.” Cohen pauses and then adds, chuckling, “The title for this show should’ve been ‘local boy makes good.’” ||