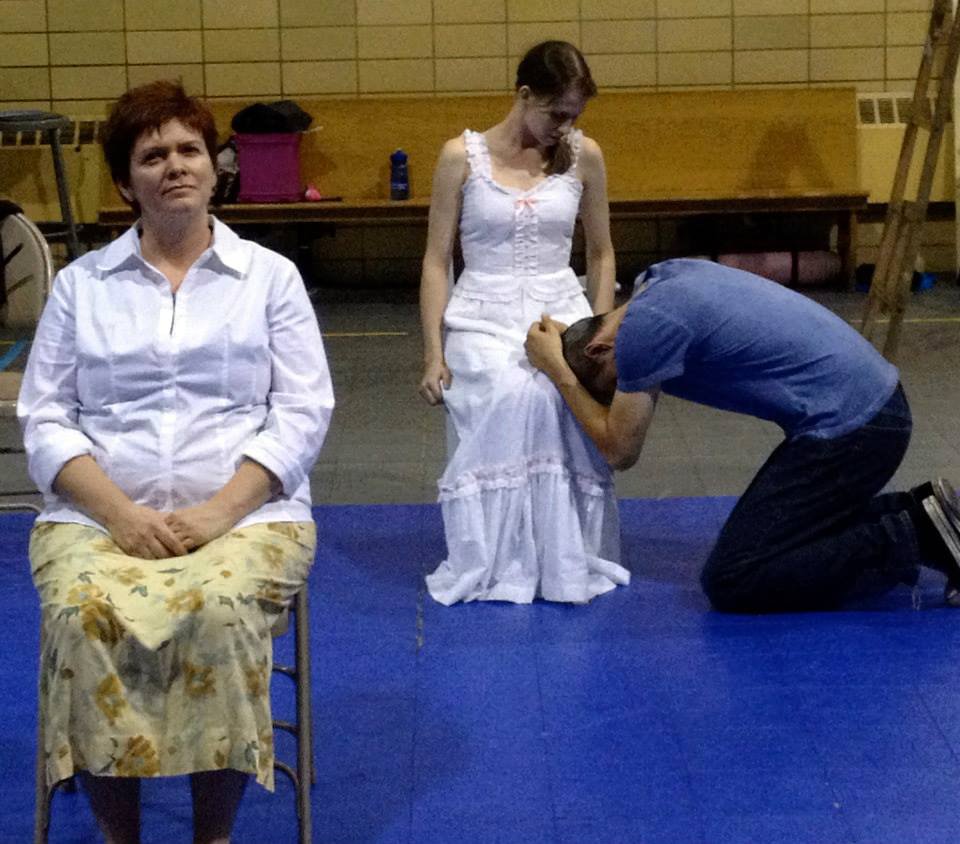 A rehearsal of Our Town. Photo courtesy Nightpath Theatre Company.

Last spring, I wrote about how I thought plays could be more like rock shows, and ever since, it’s something I’ve been thinking about a lot. Every time I go to see a piece of theater, I gauge the performance in terms of how it compares to the excitement and social experience of seeing live music, which I still believe is a direction that many theaters need to at least consider to attract younger audiences.

As someone who does theater, I have the opportunity to practice some of the ideas that I write about, and this summer I tried out some of the “suggestions” I gave to others by incorporating things like interacting via social media, playing in an alternative space, allowing time for socializing, etc.—to mixed results. The show I’m doing right now, however, if you’ll indulge me in talking about my own work, kind of flies in the face of my own advice.

I’m performing in a production of Our Town, by Thornton Wilder, a play that has become a staple of high school and community theaters everywhere. We have two performances at the Southern Theater this Monday and Tuesday, but the majority of our performances have been at retirement communities and schools in the Twin Cities—and so our intended audience has not been the young hip crowd that I’ve written about theater needing to attract, but rather an entirely different demographic.

At first I was reluctant to do the script. I’d never seen Our Town performed, but I’ve read it, and never really identified with it. Written in 1938, the play grew hugely in popularity in the 1950s, and has been an “old chestnut” since—though I think it’s become less frequently performed over the past 20 years. A play about small town life, it doesn’t immediately resonate with people like me who have never lived in a rural area. I’ve never lived in a place where all my neighbors know each other, and since the play is set at the turn of the 20th century, when young people got married right after high school, when the milkman came to deliver the milk and cream, when everyone went to church and the highlight of the week was going to choir practice, there are many things in the play that I’ve never experienced.

What’s amazing about going out to these retirement homes, where our audiences consist of people in their late 70s at the youngest (I believe our oldest audience member was 98), is that they do immediately “get” the show. They recognize things like stringing beans and the subtle rivalries between the Congregationalists and the Methodists, and how “in our town we like to know the facts about everybody,” as the Stage Manager says.

The way the play is blocked, all the actors are on stage the entire time, even those who aren’t in a given scene. When we exit, we sit one either side of the stage and watch the action. Because the spaces we’ve been performing so far have the audience lit, I have had the opportunity to sneak glances at the people watching—and it’s really amazing, especially with the older audiences, how enraptured many of them are with the show. The most rewarding experience was at Carty Heights, which was our most racially diverse audience; the audience was vocal throughout the entire show, laughing at almost every moment.

I’ve also never been heckled so much as doing this tour—and I performed Shakespeare for schools in Chicago for three years. Because some of the audiences are living in assisted care, there are some mental health issues amongst the people we’ve performed for. At one venue, an elderly gentleman, near the end of the play, called out, “What the  hell is going on?!” At another performance, a woman called out, “Is it a boy or a girl?” (We thought at the time the remark was directed at a cast member, but later found out it was about a baby doll another woman was holding.)

It’s been an extremely rewarding experience, and has made me think about how more theaters could do this kind of outreach. There are some that already do: Ten Thousand Things is the most obvious example, but other companies do similar activities out in the community. I like Mixed Blood’s Radical Hospitality program (where performances are free when you purchase on the night of the show), but I think actually touring to different communities—Mixed Blood does this as well—allows you to reach people who might never come to a theater, but would come to a play at a local church or community center.

I think if we can break down the phenomenon where only a certain kind of person goes to the theater—if there can be more opportunities to see performances in venues people already feel comfortable going to—maybe theater will start to escape the trap it’s found itself in.