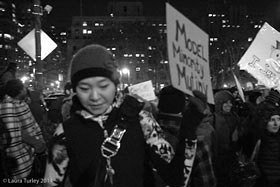 This fall, in the wake of the shooting death of Michael Brown, and in the face of the mounting Black body count at the hands of law enforcement, ChangeLab put out a call for a Model Minority Mutiny. We called on Asian Americans to stand up against the model minority myth as an act of self-liberation from a humiliating, trivializing, and dehumanizing stereotype that has, for too long, been used as a justification for labeling Black communities as “problem” minorities, and excluding and criminalizing Black people.

Many Asian Americans were already part of the mobilization. Many more are answering the call.

But while young Asian Americans take to the streets to make the dual case, “we’re not your model minority,” and “Black Lives Matter” to the public, many are finding it difficult to bring the Model Minority Mutiny home. Our families, among whom many are refugees of war and of the devastation being wrought on vulnerable communities in the global economy, are struggling with the call to mutiny against the stereotype. Some, understanding how vulnerable they are here, as residents of a country in which they are often viewed as unwelcome guests (or even pests) view the model minority myth as a shield against violence and discrimination. Others have internalized the myth, and along with it, negative stereotypes about Black people, making the case through their experiences that the model minority myth is the flip side of anti-blackness. 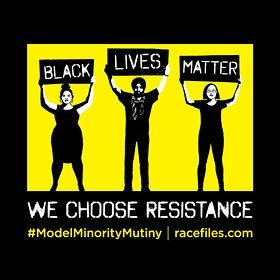 ChangeLab wants to provide resources to those who are involved in what is often the most difficult battle. The struggle to reconcile our values and beliefs with those of our parents. We know how much they’ve been through; how much they struggle still to make rich and fulfilling lives for themselves and their children in a country that they find strange, and in which they are often treated as strangers.

If you have stories to share, we’d like to use them (with or without attribution) to produce resources including:

ChangeLab will compile the greatest hits and create a Model Minority Mutiny action kit that we will post on our website. Your privacy will be protected.

You can participate by posting in the comments thread below, or email your stories and contact information to info@changelabinfo.com.