Note from Sally Jo Sorensen, editor of Bluestem Prairie: The following email appeared on the DFL State Central Committee e-list. I found Melendez’s insights worth reposting for the public, and received his permission to publish the email on Bluestem.

A discussion of party meeting schedules and a few other items have have been omitted–and that editing is indicated by the use of ellipses (. . .).

My thanks to Chairman Melendez for allowing me to repost the text here.

I have been taking the time since Election Day as an opportunity for listening and learning. Although some people seemed to feel that they had everything figured out by the next morning, I didn’t (and I still don’t). But now that some time has passed, and we have all gained some perspective on the results, and some context that may not have been immediately evident, I’m writing in order to share my first-draft thoughts about those results and how we interpret and respond to them.

Besides the conversations on this email list, there have been several good commentaries that have offered illuminating insight, some from a national perspective and some from a Minnesota perspective. Democratic candidates and state parties in every state around the country felt the tidal wave that President Obama referred to as a “shellacking,” so our experience here in Minnesota must be interpreted within that national context. William Saletan of Slate argued eloquently, in his article “Democrats didn’t lose the battle of 2010. They won it,” that health-care reform and the other solid legislative accomplishments of the 111th Congress were worth the price that we paid at the polls:

The big picture isn’t about winning or keeping power. It’s about using it…. A party that loses a House seat can win it back two years later, as Republicans just proved. But a party that loses a legislative fight against a middle-class health care entitlement never restores the old order.

And E.J. Dionne wrote for The Washington Post that “Democrats should hold their ground” and not be stampeded by an electoral setback into suddenly steering a different course.

Here in Minnesota, Javier Morillo-Alicea wrote an article on the Bluestem Prairie blog titled “Filling the glass: an organizer’s take on Tuesday in Minnesota,” which pushes back on the “defeatism” with which many DFLers viewed the election results. And while others were focused on Wednesday-morning quarterbacking and the blame game, Nathan Hunstad turned the discussion in a factual direction and gave us the first comprehensive analysis of “Local elections and turnout.”

When a newspaper article early in the Kennedy administration referred to the President’s aide Arthur Schlesinger as “coruscatingly brilliant,” Kennedy reminded him that “a hundred thousand votes the other way and they’d all be coruscatingly stupid.”

So which is it? Is the glass half empty, or is it half full?

It’s both, of course. Any analysis that looks at our gubernatorial win for the first time in 24 years (and our decisive wins in every other statewide office), but overlooks our legislative and congressional losses, is woefully incomplete. But any analysis that looks only at our losses without also acknowledging our successes is equally useless. We need the big picture. We need context. 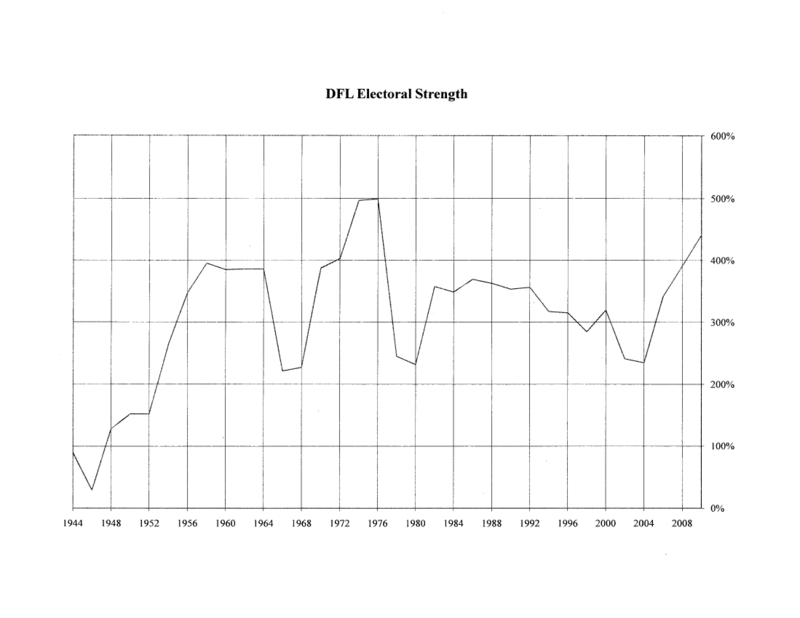 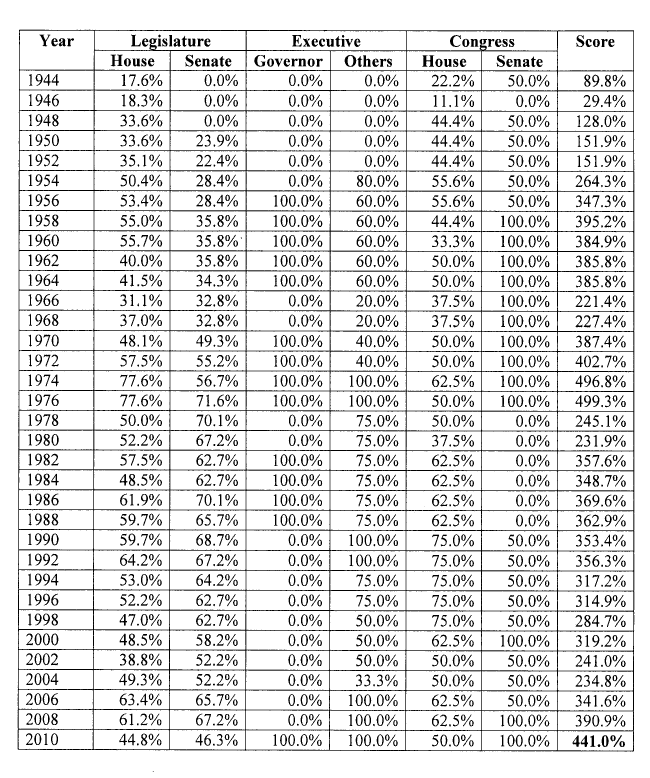 The chart reflects the Party’s political strength when the officers elected in a given election take office in the new year. Here are some interesting statistics about the 2010 election, which help put the 2010 cycle in perspective:

So looked at in this context, this cycle was the third best in the Party’s history. We won the governorship for the first time in 24 years. We swept every other statewide constitutional office and, with Senators Klobuchar and Franken in office, we now hold every statewide office. And we are on the cusp of regaining legislative control, just ten seats away from retaking the Legislature in the 2012 cycle — an attainable goal, since we have gained more than ten seats in two of the last four cycles.

So if we won, or at least we didn’t lose, why does it hurt?

I can think of several reasons.

First, losing the Legislature was a shock. We were surprised and stunned. The polls didn’t predict it; the pundits didn’t predict it; even the Republican trash talk was focused on the constitutional officers and Congress, not on the Legislature. An MPR-HHH poll taken just a week before Election Day showed a generic DFL legislative candidate with a 10-point lead over a generic Republican candidate.  A prominent state representative, one of the more astute observers at the Capitol, predicted that the House DFL Caucus would emerge with 78 seats after the election — a number that seemed eminently reasonable.

Second, we lost some good friends — and to a seemingly senseless tragedy. Personally, I have never admired or respected any politician more than I have admired, respected, and loved Jim Oberstar, and I can hardly imagine a world where his constituents would let him go. But we’re living in that world. As Representative Al Juhnke wrote, “there was a pretty stiff political breeze blowing across the prairie on Tuesday. It was nothing I did or didn’t do, I was just caught up in it.”

Third, we came so close, so close, to hitting the trifecta in a redistricting cycle for the first time ever.

Fourth, after two decades without a DFL Governor, we have become conditioned to thinking of electoral success in terms of legislative elections, since the Legislature is the only arena in state government where we have succeeded in the past generation. We aren’t accustomed to appreciating the power of a gubernatorial administration: the power of staffing and directing every cabinet office and state department, the power of filling judicial vacancies, the power of the veto pen. We’ll get used to it — and when the most powerful figure in state politics is on our side for a change, it will be a powerful antidote. But right now that power seems remote and unfamiliar, while the loss of our legislative majorities seems all too real.

Finally, and perhaps most importantly, the joy of winning the governorship is tempered by the uncertainty of a possible recount and looming litigation. We won and, intellectually, we are all confident that Mark Dayton will be our next governor. But it’s too early to pop the champagne corks. Our joy must be deferred for a little while longer. Meanwhile, our sorrow at losing our congressional and legislative friends is certain, untempered, and immediate.

But here is the real question that we should be asking ourselves: Would we trade places with the Republicans, losing the governorship in exchange for thin legislative majorities that can be easily swept away in the next cycle? Would they trade places with us?

I don’t think so.

We have heard a lot of suggestions. Change the leadership. Change the message. Change something. Just: change.

But change for change’s sake isn’t a strategy. There is a saying that half of the money spent in advertising is wasted; the problem is, nobody knows which half. And indulging our knee-jerk reactions and pet peeves, without waiting for the facts, without gaining some perspective, may easily head us down the wrong path — even though it will make us feel like we are in control. We definitely did many things right in 2006 and 2008 — so was it a mistake when we did them again in 2010? Maybe it was. But let’s examine carefully before we jump to that conclusion. Maybe Al Juhnke’s point was valid in a broader sense, and the political wind was bound to take its toll no matter what we did. (I do have a hard time believing that we could have withstood a tidal wave that toppled a titan like Jim Oberstar if we had just found a better bumper-sticker slogan, or had used social media differently.) . . .

First . . . we need facts before we can draw meaningful conclusions. We’re getting smarter every day: Election Day was on Tuesday the 2nd. By Thursday the 4th, Bob Spaulding had shared Representative Carlos Mariani’s statistical analysis of the Minnesota Senate turnover, and Nathan Hunstad’s analysis of margins and turnout appeared. It wasn’t until Thursday the 11th that the StarTribune published Steve Elkins’s commentary exposing how pro-business groups quietly pumped hundreds of thousands of dollars into a dozen legislative races at the eleventh hour, which may easily have affected several outcomes. We should weigh such information before we draw conclusions.

Second, . . .any discussion about the Party’s direction and future should be led by a chair with a fresh mandate from the Business Conference (regardless of whether that chair is a reelected incumbent or a new chair).

And third, our conversations around the Party’s direction and future should be driven from the grassroots up. . . .

[O]ur tasks heading into the 2012 cycle are clear: hold the Presidency and Senator Klobuchar’s seat; reelect the DFL congressional delegation and retake the Eighth; and win at least six more seats in the Minnesota House and four more in the Minnesota Senate, so that Mark Dayton will have the legislative allies that he needs to keep building a better Minnesota. We have done it before — repeatedly. We can do it again. And when we do, we’ll all be coruscatingly brilliant again. 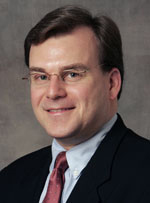 Brian Melendez is the Chair of the Minnesota DFL Party.