NEWTON, MASSACHUSETTS (birthplace of the Fig Newton)—On Monday night, I sat on a bench in a bathroom while Isabel painted my hair with Manic Panic Blood Red semi-permanent hair color. It turned my hair a shocking shade of red, most visible in the spots where I had my dark brown hair bleached a few weeks ago and near the temples, where my scattered gray hairs are most copious.

Isabel is 17, I’m 35. I’ve known Isabel since she was four months old; I started babysitting for Isabel and her sister Sophie (now a sophomore at Tufts University) in January 1994, when I was a freshman at Boston University. I spent a stretch with Isabel’s family as a live-in manny when I was attending graduate school at Harvard University, and since I moved home to Minnesota in 2007, I’ve flown out a few times a year to hold down the fort while the girls’ dermatologist parents fly off to drop some knowledge about laser surgery and wound healing.

I’ve been here for a week this time, working online at my Daily Planet job, visiting with college buddies, touring the Tufts campus, and spending a lot of time with Isabel and her friends. My followers on Twitter probably signed up to see what I had to say about Marijuana Deathsquads at Nick & Eddie or drunken tomfoolery at Uptown house parties, but they’ve stuck with me through a week of observations about summer camps (they sound just as cult-like as I always imagined, complete with obscure and proprietary symbology), public high schools (new running tracks, I learned, have a New Track smell), top 40 radio (thank you, Jason Derülo, for claiming the gratuitous umlaut from heavy metal so that R&B acts can have some fun with it), and bayside country clubs (“Drive Leisurely,” command signs along the winding driveway).

In the midst of this sojourn among adolescents, I’ve coincidentally found myself twice sitting at the Coolidge Corner Theatre watching movies about (though not necessarily starring) teenagers. The second time was this afternoon, when I went alone to see a bargain matinee (only $7.75!) of Never Let Me Go, Mark Romanek’s new adaptation of the ploddingly atmospheric 2005 novel by Kazuo Ishiguro. The first time was Friday night, when Isabel and I attended a midnight screening of John Hughes’s immortal The Breakfast Club (1985).

Especially apparent on the big screen is the fact that both movies spend a lot of time holding long close-ups on teenage characters’ faces, as though the keys to their minds might eventually emerge like Magic Eye pictures. Both movies also end with voice-over narrators presenting theses about the universality of human experience. Beyond that, the similarities end.

Never Let Me Go is a beautifully shot film, lavishing in the thick textures of damp brick, woollen sweaters, and—in the final shot—ribbons tied to a barbed-wire fence. Unfortunately, its characters are trapped in a plot that, while perforce more concise than the book’s, gives them nothing to do but suffer. All the big decisions—from the macrosocial to the purely individual—are made offscreen and explained after the fact, so all we get to watch is beautiful people being beautifully stoic. Pretty much all that happens as the movie runs its course is that the characters learn more about just how profoundly sucky their situation is. Silent tears occasionally flow.

The characters’ tragedy is that—for reasons I won’t reveal—they will never escape adolescence, never experience lives beyond young adulthood. By the end of the movie, with a couple of penetrating scenes that make use of the immediacy of film to achieve a power beyond anything found in the book, Romanek and screenwriter Alex Garland manage to turn the story into a moving allegory about the brevity of all our lives, but for most of the movie we watch the young characters drifting in photogenic despair through a life where the many licentious pleasures to be had (the kids don’t have to work, and are encouraged to have all the sex they want) are hollow and grim, yielding quickly to the inevitable pain of growing up and doing one’s duty. It’s like Pinocchio’s Pleasure Island as imagined by Roman Polanski, with his uncanny ability to create psychological horror and sadly apparent willingness to put young people through it.

It’s a bracing view of adolescence, and in many respects Never Let Me Go is a “better” film than the gleefully trashy Breakfast Club. The Breakfast Club characters are kids who feel trapped by their stereotypes, and over the course of a daylong detention learn that their similarities are more important than their differences. It’s a more accessible premise than the tweedy existentialism of Never Let Me Go; in fact, it’s downright cheesy. What makes The Breakfast Club a classic are Hughes’s sharp way with dialogue, his generosity with his actors, and most of all his appreciation of the fact that teenagers’ lives often are downright cheesy—a fact that the kids are generally not sure how they feel about. Roger Ebert once complimented 2001 by saying that Stanley Kubrick gives us eternity in a dish of peas; by the same token, John Hughes gives us all of adolescence in Molly Ringwald’s nervously bitten lip. 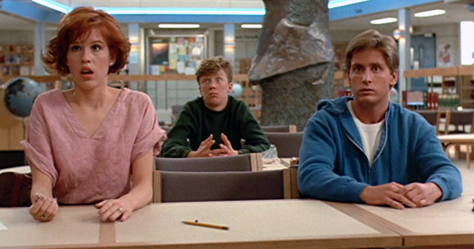 I saw Never Let Me Go almost alone in the theater, sitting right in the middle of the front row. I don’t see movies that way very often any more, but I used to do it all the time when I was in high school—I’d go to the Grandview or Har Mar and see whatever Premiere magazine, which I read religiously, said was new and exciting. I’m sorry about all the great movies I miss now (I’d seen not a single one one of the ten Best Picture nominees at this year’s Oscars, a long fall from the days of my original Front Row Seat column, which was a movie-review feature in the magazine High School High 5), but these days, there are a lot of things I’d rather do besides sit alone in a movie theater.

As I sat there waiting for the movie to start, I thought about my week among the teens of Newton and tried to remember what it was like to be Isabel’s age. I think the best way to put it might be that I was afraid of the world. Parties and basketball games and other people’s lives were mysterious to me, and I had little confidence that I’d be at all welcome if I tried to join in. When I showed up one day at school with my hard-earned letterman’s jacket—for varsity golf, thank you very much—the guys on the football team took turns poking their heads into my homeroom and laughing at me. What was the point of even trying?

It took me a long time to really figure out what the point was, and I’m sure that for all the bulletproof poise Isabel’s friends display—some of them greet me like they’re tellers at a bank, calling me by name with firm handshakes and wide smiles—the kids of Newton have plenty to figure out too. I’m not afraid of parties or basketball games or other people in general any more, so over the past decade or so I’ve been trying to make up for some lost time. “I’ve really been trying to corrupt myself,” I told a friend I’ve known since college when I saw him last night. “You’re doing a pretty good job,” he said, brushing off my protestations. “Listen, I knew you when you were 18.”

I’m glad I’m not a teenager any more, and I’m especially glad I’m no longer the teenager I was. My teen years had their high points (not that kind of high, needless to say), but for the most part those years were pretty lousy compared to my years as an adult. My adolescence was a little quirkier than the average kid’s (I’m guessing Sister Mary Fran, who’d shake her head and sigh when I’d walk into her seventh grade classroom carrying a giant hardcover copy of The House of the Seven Gables and brushing spitballs off my school uniform, could attest to that), but I’m guessing the Glory Days types who actually miss adolescence are in the minority. For some, adolescence surely felt tortuous and pointless, as portrayed in Never Let Me Go. For others, it probably felt alternately oppressive and hilarious, like in The Breakfast Club. Mine was apparently most like Pump Up the Volume, the 1990 Christian Slater flick that I remember seeing as a teenager and making a mental note to my adult self that this movie knows exactly what being a teenager feels like.

Glad though I am that my teen years are over, I’m sure I’ll keep revisiting them—on film and otherwise. Your adolescence is like your family: love it or hate it, you only get one.