Democratic strategist, author and political pundit, Donna Brazile, keynoted the breakfast, in its 24th year. Brazile told the guests to measure a person not by wealth, but in the manner that King would have – by deeds.

“The world can be dark and evil,” said Brazile. “When a child’s belly is swollen with hunger, when girls are being sold into slavery – if one person does not have a coat to shield them from the cold, then winter has come to our hearts. It ain’t the size of your salary, it’s the quality of your service.”

Brazile said when we remember the historic figure in civil and human rights it’s important to remember that King was a man of love and great faith.

“I recall when Dr. King was shot and my grandmother gathered all of us together to pray,” said Brazile, who was 8-years-old at the time. “She told us to pray for him and his family, but also to pray for the man who shot him. I asked why are we praying for him and she said, ‘Because Dr. King would want us to pray for our enemies.’”

“The year following Dr. King’s assassination there was a campaign to get everyone registered to vote,” said Brazile. “I wasn’t old enough to vote but I could register others to vote.”

Brazile, who was instrumental in passing legislation that recognizes King’s birthday as a national holiday, worked on every presidential campaign from 1976 through 2000, when she was the first African-American to manage a presidential campaign. The adjunct professor at Georgetown University encouraged the breakfast diners to remain vigilant in the struggle.

“Dr. King said we can never be satisfied, we can never turn back,” said Brazile. “Let us increase our service to others. Let us add to the charity we give. Let us exhibit gratitude. Let us expect more of ourselves than we do others. And, let us not be satisfied until justice rolls down like water and righteousness like a mighty stream.”

“The African-American unemployment rate is two times the national average,” cautioned Boyd. “African-Americans are 13 percent of the population, yet make up 38 percent of those incarcerated. The achievement gap shows that we are failing to educate our children of African-American, Latino and Native-American heritage as compared to white counterparts. We can’t let the progress of the last 50 years allow us to be silent.” 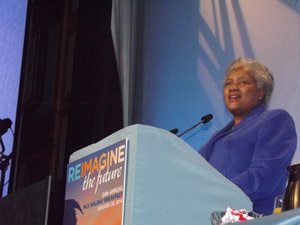 “There’s a fierce urgency upon us,” said Lomax. “We are on the brink of being too late for too many young people.”

Henry Rucker, who was in attendance with his wife, Nicole Rucker and 7-year-old daughter, Alana Rucker, said Americans must always celebrate the legacy of King and others in the civil rights movement.

“These young kids need to know that things haven’t always been like this,” said Rucker, referring to the gains that have been made by many African-Americans. “My daughter is growing up in a society where she doesn’t know anything other than a Black president and that’s beautiful, but you have to keep the passion and movement moving forward.”

The annual Twin Cities celebration is one of the nation’s largest MLK holiday observances. Both of the state’s senators, the governor, and the mayors of Minneapolis and St. Paul attended the breakfast along with several other political and civic leaders.

The Dr. Martin Luther King, Jr. Holiday Breakfast began in 1991 when UNCF and the General Mills Foundation joined together to host a community celebration to honor the legacy of King.