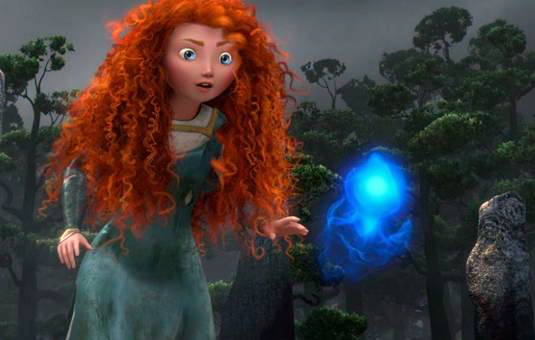 Is Brave the most atypical Pixar film ever? Pixar is known for making high-quality, innovative films that are clever and compelling. Brave takes a tired premise and spins it into an unnecessarily complicated narrative that stretches over long spans when there are more yawns than chuckles. The animation is high-quality, but that’s about it.

It’s an unfortunate misstep for the storied animation company’s first film with a female protagonist. Merida (Kelly Macdonald) is a princess, and guess what? She’s a tomboy who rankles at the plan of her mother (Emma Thompson) to arrange the princess’s marriage to a suitor chosen for political reasons. We’ve heard this one a million times, and the clichés keep piling up: Merida’s a dad’s girl who’s an expert archer (the go-to feminine fighting skill for generations of fantasy heroines from Susan of Narnia to Katniss of District 12) who hates corsets (my kingdom for Hattie McDaniel) and likes to wear her hair down (hey, that’s no bounty hunter!). Within minutes of Brave’s opening, the entire hoary scenario is signed, sealed, and laminated under a one-with-nature montage set to a pseudo-Gaelic song that makes “Colors of the Wind” sound like Gershwin.

Aye, pseudo-Gaelic: we’re in medieval Scotland, home of Hollywood’s favorite ethnic group. Are there jokes about garbled accents and under-kilt nudity? Is Mel Gibson anti-Semitic? The lovingly rendered Scottish landscape is the best thing about Brave, which otherwise would have looked like purely an excuse to show off the processing power of the bank of computers tasked with animating the princess’s naturally curly hair.

After Merida spoils a competition among her suitors by stringing her bow and declaring she’d prefer to take her own hand (I’m not even going to go there), she bops out to make a hasty deal with a witch—a deal that results in her mother being transformed into a bear. The spell is reversible (of course), but only if the princess solves a riddle (of course) that she quickly solves (because it’s not that hard), meaning that all that’s left for Merida to do is sneak back into the castle without letting her bear-hating father unknowingly kill her mother (paging Dr. Freud); figure out what to do about a few other characters who have been caught in the magical crossfire (bear buns!); bring peace to the ignorantly warring clans (would they have tried this with a movie featuring African clans or Native Americans?); convince all of Scotland to change its practices regarding marriage (because in Disney movies, all centuries are just the 20th century in period costume); and kill another bear-human who was the victim of an earlier spell (by this point, do you even care?).

This would all be in the good fun of an animated fantasy romp, except that very little of Brave is particularly fun: every character spends almost the entire movie peeved off at every other character. It’s hard to recommend Brave to anyone, but especially to families with young children. The convoluted plot is confusing—I heard at least one mom trying to explain it to her young son on the way out—and the evil bear is one of Disney’s most truly nightmarish villains since Sleeping Beauty’s Maleficent. Much of the movie takes place at night and is literally dark; I found myself lifting my 3D glasses to see the projection more brightly. The only consistent sources of levity are Merida’s three younger brothers, impish kin to Lock, Shock, and Barrel from The Nightmare Before Christmas.

The screening I attended was preceded by an advertisement for a Brave-related family vacation tour to Scotland. If you bring your family to Scotland and find yourself standing in a beautiful landscape with Kid Brother being naughty, Big Sister hating Mom, Mom complaining that Dad doesn’t support her, and Dad wanting a drink…well, there you go. You’re having the authentic Brave experience.