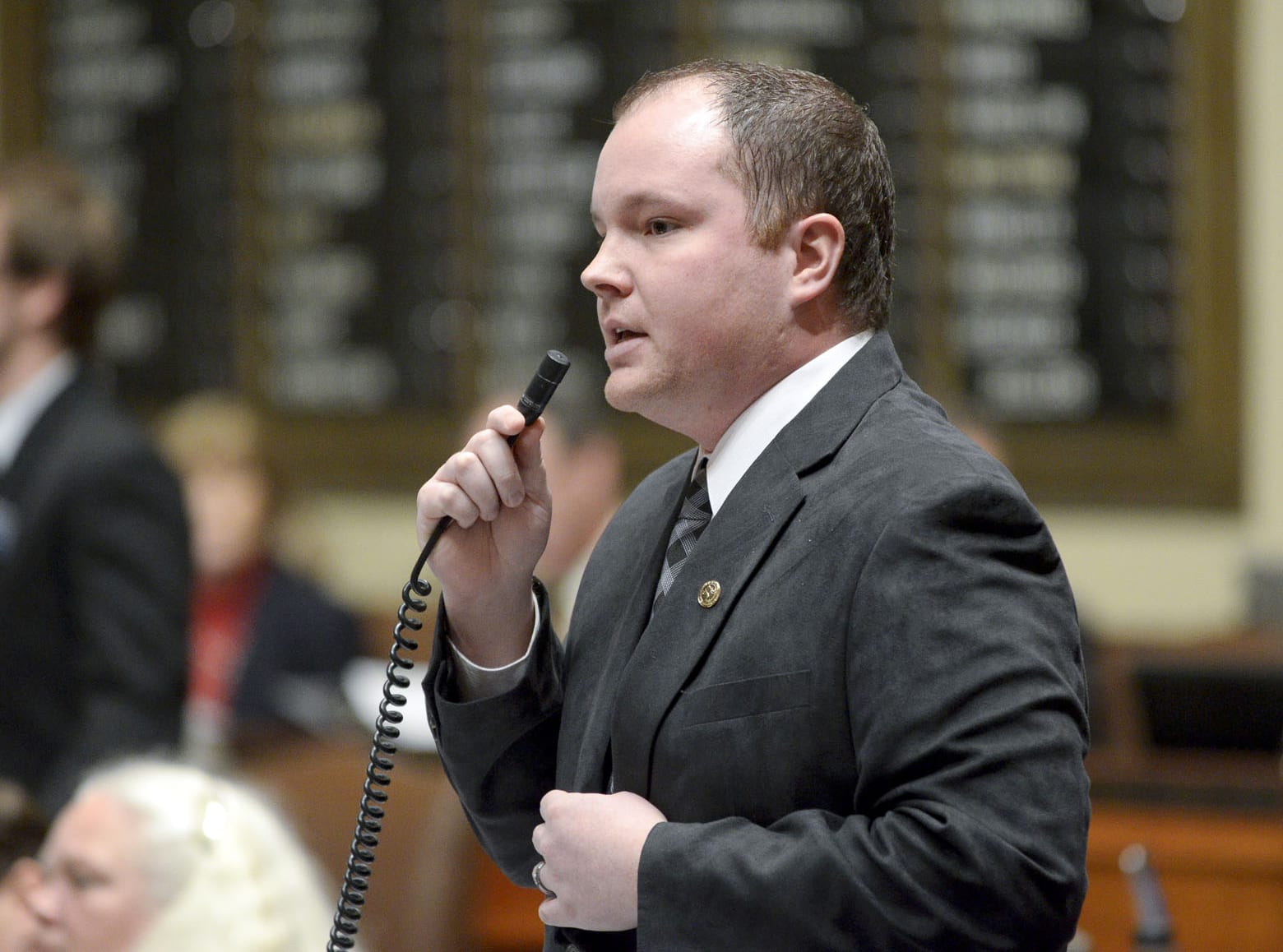 Rep. Branden Petersen says that not running for the Legislature was never an option. (Photo by Andrew VonBank)

It’s an understatement to say Rep. Branden Petersen (R-Andover) experienced an active first — and last — session in the House.

The 26-year-old married his wife during the 2010 election campaign, added daughter Paisley to the family in 2011; and introduced significant bills dealing with teacher effectiveness and personnel decisions during his first term.

With redistricting on the horizon, Petersen conferred with Rep. Peggy Scott (R-Andover) and Rep. Jim Abeler (R-Anoka) about which seats they would run for if new legislative maps paired them a 2012 House race.

“When the maps came out we all circled back to each other and made a decision that I was running for Senate,” said Petersen, who was mapped into the same district as Scott.

Not running was never an option.

“I don’t think anybody runs for the Legislature just to be in one term. And once you’ve been here you realize you have to serve a couple or three terms to really accomplish some significant legislative items,” Petersen said.

He will run for Senate in the newly formed District 35.

Reflecting on his initial House term, he said, “I don’t know if my experience is a good reference point for all the other sessions. “What I will say is in one short session, I’ve seen just how extreme things can get. Things can only get better from here on out.”

Typically, a freshman legislator’s existence is similar to that of an apprentice; learning the tricks of the trade and determining the wants and needs of constituents.

Petersen got involved quickly as sponsor of HF945, which contained a teacher appraisal system that based teacher assessments on their students’ annual progress and reviews by parents and principals.

“I think it was a combination of right place, right time, right issue — and I would also say that I worked hard on that issue,” he said.

The bill eventually was folded into the 2011 omnibus education law.

“I was actually in the room with the commissioner and the governor in the final day of the shutdown at 1 o’clock in the morning, discussing what the (teacher) evaluation law was going to look like,” he said.

Education interests Petersen because it is a “huge issue” for the Anoka-Hennepin School District, the largest employer in his district.

This year Petersen furthered his involvement in high-profile education bills by sponsoring HF1870, the “last-in, first-out” bill that would rank teacher effectiveness over seniority in school hiring and dismissal decisions if signed into law.

“We have a system now that is centered essentially on some industrial age labor model. And in this case, we’re not talking about widgets; we’re talking about the impact on student achievement and the futures of these students,” Petersen said.

As he begins posturing for his Senate run, Petersen cited transportation and infrastructure projects as other issues of interest.

“The northwest suburbs have long been neglected for infrastructure improvements. Highway 10 west through Anoka (to Elk River) has been talked about for decades. And how long have we waited for Highway 610 to be completed?” said Petersen, referring to the east-west highway linking Highway 10 and Interstate 94.

Petersen said running for the Senate gives him an opportunity to continue to represent his community. “I love the House. I enjoy my relationships here, being a little bit more wild or less formal. But really it’s the opportunity to continue to represent my community, my hometown area. I grew up in that area. That’s why I’m running for the Senate.”

If he wins election to the Senate, Petersen will represent twice as many constituents.

He’ll also be called on to help with twice as many children at home after the expected birth of a son in late May. He has been named Cash. “That’s Cash, like Cash money,” Petersen said.