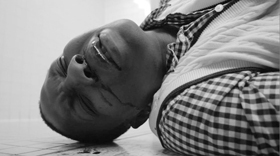 When we hear of bullying in the media, often we are only privy to stories of African-American and white race crimes, gender hate crimes, or race on race issues.

Rarely do we see the perspective of cultural bullying through the lens of the African versus African-American experience. It does not mean the issue is nonexistent, but it might however mean that people just do not realize how common and out of hand the phenomenon is.

All that is about to change.

The Twin Cities can start gearing up for an intriguing new film project coming to theaters this year. “Boys Cry” is a movie that explores the bullying trend from a cultural perspective – the struggle one African teen faces when bullied at school by African-American children, with his same skin tone, simply for his cultural differences. The film is currently finishing up production this month in Brooklyn Park with the aid of both the Brooklyn Park Police Department as well as the Brooklyn Park Public School system. The film stars Elijah Kondeh, Montel Swaray, Boakai Kimba and Ambruce Freeman. It is directed by Mitchel A. Jones (“After the Dawn”) and is a collaborative production effort between international production company End Time Harvest Productions and U.S. based Triwar Pictures.

“‘Boys Cry’ is a social contribution project that focuses on bullying from a cultural standpoint, said producer, Reggie Anderson of End Time Harvest Productions. “Most of these efforts in a visual sense feature Caucasian children dealing with internet harassment, gender orientated backlash, size and body shape issues, but rarely do we cover bullying from a cultural standpoint. Racism is only one aspect of color orientated harassment. We forget that cultures themselves clash and cause a negative atmosphere amongst children and teens. Children who appear the same color attack each other purely based on origin of birth, and it is imperative that we address that problem and widen the focus of dialogues currently out their to combat this behavior.”

By thrusting this perspective on the bullying issue into the light, End Time Harvest Entertainment and Triwar Pictures hope to assist with efforts for uncovering a worldwide solution. Although it will take unanimous exertion from a large collective to put an end to hate crimes, this team still believes “Boys Cry” is a great addition to the awareness trend. It also allows them to create an avenue of expression that encourages others to join their venture and become an evangelist for putting an end to hate.

“I don’t know that you can ever get rid of bullying for good but we can certainly reduce it and give kids resources to cope and deal with it,” said “Boys Cry” director Mitchel A. Jones. “The more we raise awareness and get people to stand up against it the better chance we have. All it takes is for people to make the decision to not stand by idle while it’s happening. If you see it happening say something, take a stand. If we as a society stop tolerating bullying it will take the power away from those who bully. I believe this film can be used as a tool by opening up a dialog about bullying. Getting kids to talk to their parents and teachers is the first step to reducing the problem. You can’t fix something that keeps lurking in the shadows and hopefully this film can serve as a light to expose some of the issues that effect students every day.”

Currently, “Boys Cry” is seeking assistance from the Twin Cities and individuals worldwide for post-production help. They have been accepted into a crowd funding program, with USA Projects, a cause-based funding solution for artists, and are down to the wire to raise their $5,000 goal which will help with marketing needs, promotional costs and getting the film festival ready. The producers said they need people who believe in not only the project, but also the no bullying movement in general to give a contribution to aid in them bringing this project, which is almost done, completely to life.

“We are already filming and wrap the film’s production Mar. 3; however, our team has donated much of our time and personal finances to complete the work,” said producer Nicole Kruex. “We recently were selected to host a donation site through a company called USA Projects which is a 501(c)(3) non-profit donation platform which allows supporters to make a tax deductible donation to our project. We’ve raised over $1,000 so far, but our time is running short. If we do not raise the $6,500 we set our goal at by Feb. 28, we lose everything that was donated so far. We are looking for the community to help. Anything from $1 to $1,000 or more will get us closer to our goal.”

For more information on this film, it’s upcoming release and the filmmakers, visit www.boyscrymovie.com and to donate, visit www.usaprojects.org/project/boys_cry.