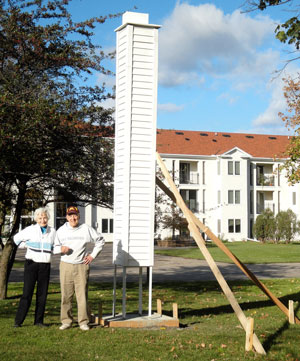 Marcia and Burt Sundquist stand near the chimney swift tower at 1666 Coffman. Photo by George Anderson.

At a St. Paul Audubon meeting some months ago, I learned that the population of chimney swifts, a small black migrating bird, is in serious decline. The swifts depend on chimneys or similar tall structures in which to roost and to rear their young. There are fewer chimneys now and of those in existence, many are capped. Thus, a population decline has set in.

David Moore, a retired teacher from Minneapolis’ Edison High School who was also at the Audubon meeting, said he had noticed the decline years ago and enlisted the help of some Boy Scouts to build chimney swift towers as one of many troop projects. While a teacher at Edison in 1981, Moore (who had been a Boy Scout in his youth) helped organize Hmong Boy Scout Troop 100. The troop has been going ever since.

At 1666, we await spring and some chimney swifts to discover the tower and to begin nesting. To encourage them, we will play a chimney swift recording in the tower so it sounds like home to them.