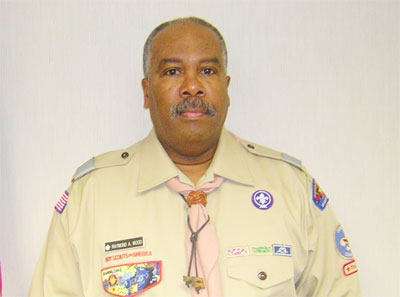 It’s not common to see a volunteer putting in time, though certainly not significant time, toward a project in which he has no vested interest. For the past 17 years, however, that’s exactly what Raymond Wood has been doing.

“It’s good to see a guy like Raymond who is dedicated to scouting, despite the fact that he’s never had any children in Boy Scouts,” said Steve Stobbs, training and advancement director for Boy Scouts of America in the Northern Star Council, covering the Twin Cities metro area.

In March, the local district awarded Wood with the Silver Beaver Award, which is presented for distinguished service either over an extended length of time, or for a single event. In Wood’s case, Stobbs said, it’s recognition of the accumulation of things he has done, and done well.

Nominated by Byron Jackson, Wood qualified for the award for his exceptional character and exemplary service. Jackson wrote on the nomination form, “[Wood] is an Eagle scout who earns his wings every day. He continues to recruit adult leaders and oversee every facet of district business activities that have an impact on our youth. He is determined, dedicated and motivational in the quest to provide a quality scouting program for all youth.”

However, when I asked Wood what it was that earned him the honor, he demurely said, “I don’t know what I did.”

While Wood might not boast on his own behalf, those who work with him certainly do. “He’s a great guy, dedicated to quality,” said Stobbs.

Wood also serves currently as a district chair of the Zulu district. While the name “Zulu” might sound misplaced in Minnesota, the district is one of the five Scoutreach programs and one of nearly 22 districts in the Northern Star Council.

Wood described some of the differences between a Scoutreach program, which provides special leadership to and emphasis on urban and rural scouting programs, and a traditional district, which conforms to geographical boundaries. A Scoutreach program defines itself according to the culture that it serves: for example, in the Northern Star Council, the Silver Maple reaches out to the Hmong community, and the Zulu district meets the needs of the African American community. “We try to look at what type of activities interest our African American boys,” Wood said. Eleven hundred youth are presently active in the Zulu district.

For more information about the Boy Scouts of America Northern Star Council, call 651-224-1891 (St. Paul office) or 763-545-4550 (Golden Valley office); or go to www.northernstarbsa.org. Information about the Zulu district is available “here”:http://zulu.nsbsa.org.