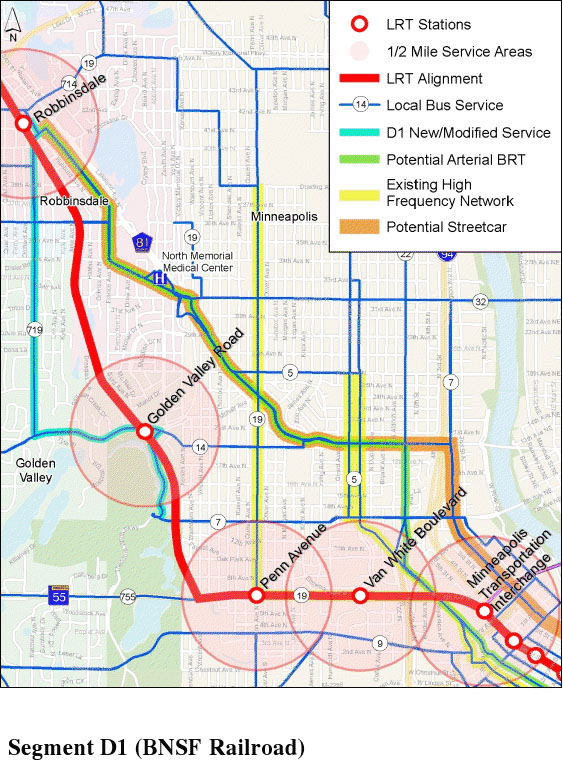 Nearing the final route choices for the Bottineau LRT line

With the Met Council’s May vote to approve the Southwest Line as the third regional LRT investment, all eyes are on the next line reaching into the northwest suburbs. But first, it has to pass the North Minneapolis smell test.

In 1817, French-Canadian Pierre Bottineau was born near Grand Forks in the Red River Valley to the belittled Métis (français for “mixed”) who while regarded by the mainstream as no better than the Dakota or Cheyenne, co-existed with local tribes as rugged Northwest voyageurs. Conflict with the aggressive British Hudson Bay Company pushed his family to seek economic refuge with the Americans at burgeoning Fort Snelling. He became an asset for Henry Hastings Sibley, one the state’s great business leaders and eventually first governor of Minnesota. Knowing nearly every tongue of the dozen native nations, Bottineau led private and military expeditions.

He held claims in present-day Lowertown St. Paul, Bottineau neighborhood in Nordeast, Elk River, Osseo and further outstate. But his fortune came from his experience, rising into a “celebrity adventure guide” by the 1850s. He negotiated Indian treaties, established new towns, and laid trails for the Northern Pacific railroad — precursor to the Burlington Northern and Sante Fe (BNSF) of the present-day corridor. Before there was even the northwest suburbs, maps called it “Bottineau’s Prairie.”

Minneapolis had over 165,000 people in the 1890s when Bottineau died and his influence continues into post-modernity. North Minneapolis leaders now wonder how can the legacy of Bottineau, an outcast who defied the odds and rose to prominence, can be fulfilled by the LRT line being named for him.

At stakeholder meetings held this summer by the Bottineau Transitway leaders in Robbinsdale City Hall and at Northside’s UROC facility, citizens saw the study’s two-year process culminating in a final recommendation for a light rail train. While suburban leaders grumble over which strip mall the train should link up to, where the LRT routes through Minneapolis is growing to be the hot-button point of contention.

Now inner-city groups are evaluating final routes “Segment D1 (BNSF Railroad Corridor)” and “Segment D2 (West Broadway/Penn Avenue).” Neighbors voiced opposition to the D1 routing that would completely bypass Northside, running along BNSF tracks and cut east along Olson Memorial Highway. Two bus routes intersect two of the stations but the stations 1/2 mile walking distance is further under-served by poor sidewalk connections. The D2 alignment tells a different story, jumping onto West Broadway and steering south along Penn Avenue, encompassing an area that has seen high crime rates. But the D1′s two stations now sit in the heart of Northside. For city leaders they see it as symbols of hope and change while suburban leaders see it as bullets flying during their evening commute.

Criticism of the Bottineau Line’s reach into greenfield lands of Disney-esque Maple Grove have mixed responses. Carol Becker of Longfellow and President of the MPLS Board of Estimation suggests it might be a boon for the suburbs to finally develop high-density and mixed-use housing and commercial options. European cities have already mastered the model for successful suburban light rail towns.

Given the political turmoil of North Minneapolis since the Plymouth Avenue Riots of 1967 and the NAACP vs. City of Minneapolis lawsuit of 1993, nothing has ever been the same in Northside. The not-so-old Jewish residents still hold onto photographs of offices they once had. African Americans still live in the most unequal neighborhoods of the Twin City. The Bottineau LRT line’s success might ought to borrow a page from deep history.

He has the characteristics of the bear and the gentleness of the woman, and if alive, as I think he is, he must be a man 74 years old. He is a noble link of the past, as he combines the French, the Indian and the American, in all his elementary peculiarities. One of the best things which can be said of Bottineau is, he was always true to his trusts, and that of itself is a noble monument to any man. – From the History of Minneapolis, Vol. 1 by Rev. Marion Daniel Shutter.