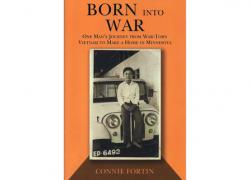 The refugee story has been told time and again, but Trong Van Nguyen’s story resonates with how one man can emerge from devastation and loss only to embody the spirit and drive that persevered in a new land to live the American dream.

“Born into War” is the autobiography of Vietnamese refugee Trong Van Nguyen, It is told in his voice and written by author Connie Fortin. It is Trong’s attention to detail that makes this more than a touching story but a map of the refugee mind as it relates the experience of adjusting to life in America.

What makes the book special is that it is written as a family history for his children, step-children and relatives and wasn’t necessarily meant for a wider audience. Readers told Tran that it resonated cross-culturally and he decided to print it for the public. 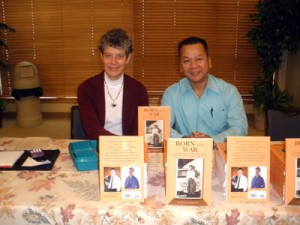 The two met at a local Vietnamese restaurant where Trong waited on Fortin. She was the only customer at the time and he began telling her about his life in Vietnam. After learning she was an author, the two discussed her writing his life story so that his children, step-children and extended family would know what happened to his family during the war and about how he came to live in Minnesota.

Writing a refugee story was not the usual interest of the outdoorswoman and she said it was Nguyen’s spirit that she found so moving and so agreed to move ahead.

“After all of these odd events and unusual circumstances, I am convinced the story was meant to be told,” said Fortin in a Q&A release.

It was a story already written in his mind and told almost verbatim in 15 chapters. Fortin would meet him twice a week at the restaurant where he would talk and she would type it all up later.

“There were nights I laid on the floor there was too much to get past,” he said. “It was hard to get back to remembering everything but we did it.”

The Minnesota Historical Society Press expressed interest in publishing the book, but budget cuts put it on hold and they found a publisher with North Star Press out of St. Cloud.

Born in 1960 in Nhatrang, south central Vietnam, Trong was the son of an educator and an entrepreneurial homemaker who ran a general store out of the back of their modes small village home. The war was beginning to escalate and central Vietnam was a battleground for public support as much as for fighting.

Trong’s father was an educated, influential man who was considered the village mayor. The communists abducted him one night in an effort to convince him to win over the locals to their effort. He refused and was never seen again. Trong was just 3 years-old.

“It was a very confusing time when I was 5 and 6 years old and we could see all of the fighting and killing of people,” he said.

Trong said he never really understood the communists but only knew the sorrow they created for his mother and his family that would never be the same again.

“We kids just looked at each other and asked ‘why did they kill our father?'”

After a while rumors emerged and once they realized their father wasn’t coming back – moved to the nearby city to live with the eldest sister who had since married. Trong’s mother would begin a slow decline and her health and spirit would never recover. She died a few years later. He would lose another sister to a bus accident.

Miserable and unemployed because of his connections to the south before the war, Trong said the communists refused his school and work application and he got the odd job here and there through friendly people within the system.

His life changed forever at age 18, when he met a woman on the bus and began to see her. Then his sister surprised him with the money he needed to make a late night run to the small wooden boats and make a run to another land as a refugee.

Trong told the stories of the boat ride and also the stories of others that didn’t have as much luck as they did the 171 people on his 21×9 boat in 1979.

“It took us five days and six nights in the sea,” he said. “One older man died and we had to throw him in the water.”

They made it to Hong Kong and he was sponsored to Minnesota a few years later. He describes the plane flight and the help of his “American mom” in south Minneapolis

Sponsored by Lutheran Social Services, Trong lived in a house with several other Vietnamese men, and graduated from Minneapolis Southwest High School, and then studied to be an electronic technician. He would marry and have children but his mind was never far from the thoughts of his father.

He made several trips to Vietnam and found former soldiers who told him where it was likely his father was buried. He led an expedition to a very remote area that had been a communist mountain post. They found his father’s remains in 2007.

“I prayed and he is the one that helped me find him,” said Trang.

Now the ashes of his grandparents, parents and lost siblings are together in their native village temple. His elder sister is now here in Minnesota. A second sister lives in Australia, and a younger brother and sister remained in Vietnam.

Today Trong has four grown children, and three of them have graduated from college. He has one son in the U.S. Air Force.

The book was a chance to tell the youth of today what it was like to live without television, the Internet, cell phone, or even plumbing and electricity. The highlights of the day were when his father would come home and they would go fishing or talk about what he wants to do when he grew up.

He said the big change in Vietnam is that they are not fighting and the people can do more in life that to just survive.

“For me Vietnam is no different,” he said. “I don’t want my own people to fight and kill each other.”

The book is available through amazon.com, borders.com, barnesandnoble.com and www.northstarpress.com.