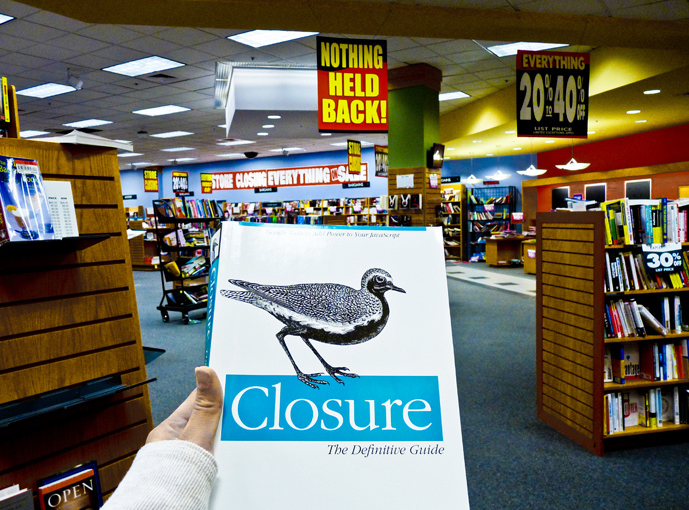 GILBERTSVILLE, PENNSYLVANIA—For the first time since this column began, I am posting from the road. Still on holiday vacation, my husband and I are visiting his family, our friends, and the small spattering of kin that I have left here. We’ve spent the week bouncing back and forth among Gilbertsville, Lancaster, and Philadelphia—all in Pennsylvania. Gilbertsville, where my husband grew up, is a suburb, ostensibly of Philadelphia, full of new housing (homes built within the last 20 years), and seemingly a new shopping center popping up between our visits—you could probably visit eight each of Target, Five Below, Petco, and Chili’s in the small timespace between lunch and dinner.

When we were here last, all of the Borders stores were shutting down. About every five miles my husband and I would contemplate stopping to buy cheap books that we would otherwise probably not consider reading. But then, thinking of the airplane trip back, and the haul on Metro Transit, we would decide against it. Returning to Minneapolis from that trip, it felt as if the general consensus was that the closing of Borders was great news—give the little guys a chance!

However, this trip, something terrible has occurred to me: What if there are no little guys? Driving around now, there are no bookstores here in Gilbertsville—aside from a religious bookstore here and there. We have seen a couple Books-A-Million, but one of them was in Lancaster, about an hour and a half away from where we’re staying.

When I asked my in-laws where they buy books now that Borders is closed they say they “go to the other one.” However, their nearest Barnes and Noble is out at the King of Prussia Mall, a little over a half an hour away. There’s only one independent bookstore they can think of, and they don’t like to go there because, since it’s also a used bookstore, they’re concerned that the store might not sell the new books that they want. However, my mother-in-law mentioned that she hadn’t bought a book in awhile, getting her reading material instead via “tradesies” with friends. While the disappearance of any and all bookstores is troubling, my sister-in-law wiped my tears on the subject away with the reminder that as bookstores are disappearing, the library system in her neck of the woods (Lansdale) is booming.

How is all of this haterade about the book trade in southeastern Pennsylvania a love letter to the Twin Cities? Chew on this: Within a ten-mile radius you can find Magers & Quinn, Boneshaker Books, James & Marie Laurie, Uncle Hugo’s/Uncle Edgar’s, Once Upon a Crime, Birchbark Books, Wild Rumpus, Micawber’s, Common Good Books…and I could keep going. It’s unbelievable how so many bookstores are able to stay afloat in such a saturated market. What I can’t decide is if this is due to some magic radiating from the lakes, or if other cities—namely, in this case, Gilbertsville—could even support this type of book market if given the chance. Spread that book love around, Minnesota!