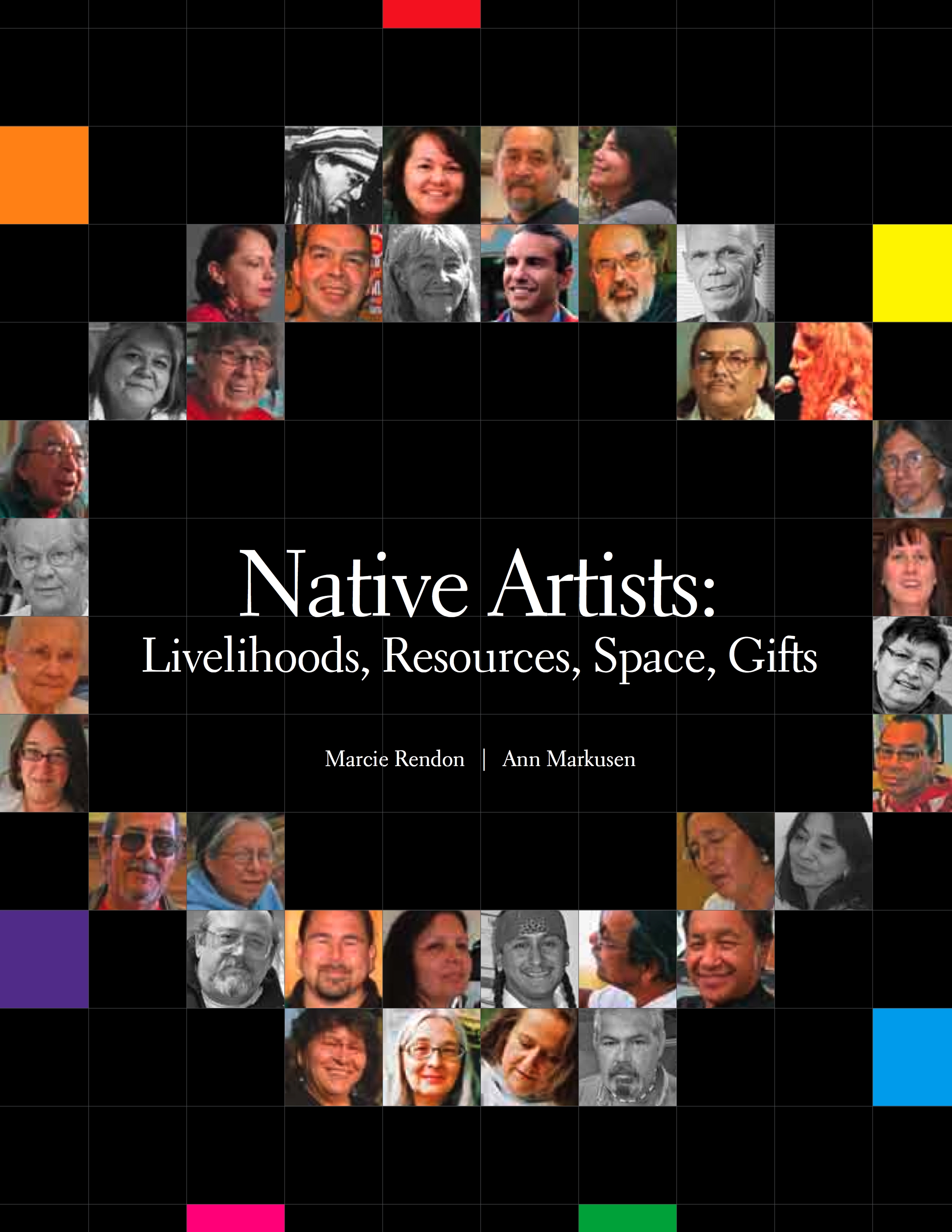 When is a study not just another study? When it transcends academia as something of real value to John and Jane Q. Public. To wit: Native Artists: Livelihoods, Resources, Space, Gifts, written by Marcie Rendon and Ann Markusen, published this past December by the University of Minnesota’s Humphrey Institute of Public Affairs.

It has, without doubt, great academic value as assigned reading for this or that class. And research-crazy eggheads, for which the U of M is famous, will find it fascinating think-tank material. However, thanks to its plain language and lack of intellectual jargon, regular run-of-the-mill folk, including those who’ve never been near a university campus, have the opportunity to find out a little something about very special people they may have never known existed. People, by the way, from whose forbears every inch of non-Indian occupied land in this state was stolen. People who, disadvantaged by that history of wholesale theft and subjugation, today contend with having their contributions to the arts selectively relegated to the social sidelines and the public eye’s periphery to the point of being all but totally obscured. The genocidal doctrine of Manifest Destiny accomplished its mission of stealing America from Native Americans. Discrimination sustains the spirit of supremacy, denying Native artists the public exposure and financial autonomy their abilities merit. As the executive summary for Native Artists: Livelihoods, Resources, Space, Gifts succinctly states, “Explicit racism has restricted access to art training and market development.”

The authors, importantly, come from both inside and outside the Native community. Marcie Rendon (White Earth Anishinabe), a profoundly accomplished artist, is an author, playwright, poet, and spoken-word performer. Her poetry appears in numerous anthologies, including Traces in Blood, Bone and Stone (Birchbark Books) and Ahani: Indigenous American Poetry (Poetry International). Her plays have been produced by St. Paul’s nationally renowned History Theatre, by the American Indian Repertory Theater in Lawrence, Kansas, and in Minneapolis by Raving Native Productions, where Rendon is producer and founding artistic director. Ann Markusen (Danish-Irish-English-German descent), a professor for 30-plus years, is Director of the Project on Regional and Industrial Economics at the Humphrey Institute. Her recent arts-related work includes San Jose Artists’s Resource and Space Study, Leveraging Investments in Creativity Artist Data User Guide, Crossover: How Artists Build Careers Across Commercial, Non-profit and Community Work, and The Artistic Dividend. She is also the author of a dozen books, including Reining in the Competition for Capital (Upjohn Institute).

Native Artists observes 50 Ojibwe artists as “germane to the prospects for all Minnesota’s Native artists.” It looks at how they make a living, how they get their supplies, where they are able to work and, of course, at their talents and skills. One purpose of documenting these careers and circumstances is to rectify the anonymity in which Native American artists subsist—in a state where, ironically enough, you can’t travel far in any direction without seeing an Indian word on the road signs—words including Minnehaha, Minnetonka, and, for that matter, Minnesota.

“In 2006,” Ann Markusen noted in an e-mail, “I published a study of Minnesota’s Artists’ Centers. When that study was completed, I felt that I, offspring of settler families, was just beginning to understand the real history of our state and the disgraceful role of our government and white citizens in the displacement and oppression of Native people.” She added, “[Marcie Rendon and I] believe that, through the talents of many of our interviewees, Minnesota and neighboring states could build a reputation for distinction in Woodland Indian art comparable to the place Pueblo and Navajo art holds in the southwest.” Accordingly, the report makes recommendations for arts resources and space managers, funders, and more to raise the visibility of artists, thereby supporting viable careers and establishing feasible incomes for Native American artists in Minnesota.

In an e-mail, Rendon quite realistically stated, “Studies do not change racism. [This] study might prod some institutions and organizations into action to cover themselves ‘cause they don’t want to look bad. It hopefully will also benefit artists we didn’t have the chance to interview.” Among artists profiled are painters Karen Savage-Blue and Jim Denomie, graphic designer Connie Engebretson, spoken wordsmith Sarah Agaton Howes, poet Robert SwanSon, and producer-musician Keith Secola. The report is handsomely laid out, reads easy and, all said, has a refreshing air about it. There is nothing like learning from a fascinating source of information.

Native Artists: Livelihoods, Resources, Space, Gifts is accessible at hhh.umn.edu/ projects/prie. While supply lasts, copies also are available from the McKnight Foundation at 612-333-4220.