An authorized biography doesn’t have to be laudatory—recently, for example, David Michaelis’s portrait of Peanuts creator Charles Schulz as cold and emotionally wounded ruffled the feathers of the late cartoonist’s children—but when author and subject have shared a close multi-decade friendship, “even-handedness” takes on a particularly personal meaning. Christopher Finch’s personal acquaintance with artist Chuck Close (who, at 69, is very much alive) is both the principal strength and the greatest limitation of Finch’s new biography Chuck Close: Life.

Finch was an associate curator at the Walker Art Center when he met Close in 1968, and successfully lobbied the museum’s trustees to purchase (for $1,300, the equivalent of about $8,000 today) Close’s landmark painting Big Self Portrait, which is currently on display at the Walker in Benches & Binoculars. The purchase fulfilled Close’s ambition to make his first major sale to a museum rather than a private collector, and, Finch explains, earned early respect for the artist among Twin Cities institutions. “Not long after the Walker’s acquisition, another of the black-and-white heads, Frank (1968) was acquired by the Minneapolis Institute of Arts, and a third was bought by local art dealers and collectors Gordon Locksley and George Shea.” The Walker was also the site of Close’s first major museum retrospective, in 1980.

By that point, Finch had moved to New York, where he and his wife became friends of the Closes’. In fact, Finch’s wife Linda was the subject of an important 1975-6 portrait by Close. Finch, who began his career as a writer and has authored many books and articles on art and history as well as pursuing his own artistic endeavors, is thus uniquely positioned to write about Close, and Life is a companion piece to Finch’s Chuck Close: Work (which I have not read), a 2007 survey of Close’s art.

Even in Life, though, Finch’s focus is squarely upon Close’s work—though somewhat longer than a biography such as you’d find in an exhibit catalog, Life has the same quality of addressing Close’s personal life in the context of his professional life. Finch’s first priority is to walk the reader through the progression of Close’s work, with biographical details situating each period. It’s clear from the first page that Finch is acutely attuned to Close’s eventual perception of the book, and you can almost imagine Finch sitting with a manuscript and reading the text aloud to Close, watching for the artist’s reaction. The text has a safe, scrupulous feel that inclines me to think there are many stories yet to be told about Close’s life. 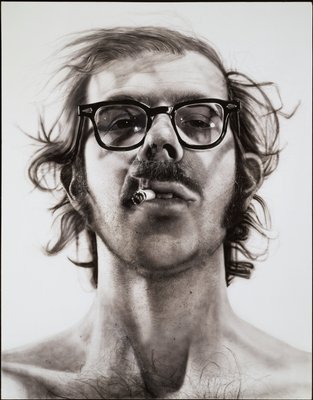 Which is not to say Chuck Close: Life is boring—far from it. For a volume that veers away from the slightest scrap of titillating gossip, Finch’s book is very readable. He has quite a story to tell: part of Close’s celebrity is due to the fact that, after a collapsed spinal artery at age 48 very suddenly (and permanently) stole most of the artist’s voluntary movement below the neck, he managed to continue his groundbreaking career with amazingly little interruption. Even prior to what has become known as the Event, though, Close lived an eventful life—journeying via Yale from the art-world hinterlands of Everett, Washington to a squatters’ SoHo where you could trade art for drinks at Max’s Kansas City and Philip Glass would help you install heavy-duty pipes that wouldn’t burst when the water froze in your unheated loft.

You would expect Finch to be good on the subject of Close’s work, and he doesn’t disappoint. The author’s discreet judiciousness pays off in his enthusiastic but straightforward descriptions of Close’s work and its significance; Finch has a critical voice, but it’s fair and doesn’t interfere with your ability to benefit from the book if you happen to disagree with his judgments. Finch is modest and appropriate in his discussion of his own role in Close’s life, and he lights up when describing the people and places that he and Close both know well.

In the end, Chuck Close: Life is authoritative and indispensible, but not definitive. Finch, for example, dances around the subject of Close’s deteriorating marriage, dropping dark hints with references to the changing depiction of Close’s wife in the artist’s portraits of her. Only at the very end of the book does Finch reveal that Chuck and Leslie Close separated in 2009 after 42 years of marriage (noting that Chuck Close is “a permanent fixture on the New York City party circuit,” the Huffington Post just last month cited a Page Six report that the artist has been “seen in the company of a tall blonde”).

Leslie Close appears in Life as an enormously supportive but also stormy and skeptical presence, and I closed the book hoping that the artist’s spouse is considering telling her own story. When I think back to occasions when people who love me were really pissed off at me, I remember them saying some things that were very true and some things that were completely ridiculous. Finch says nothing the least bit ridiculous in Chuck Close: Life—but he also probably leaves some important truths to be told.