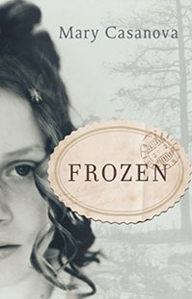 From the moment she wondered if she was just a bored teenager during the summer months (as true today as it was almost 100 years ago), through her quest for the truth, Sadie Rose’s story—as told in Mary Casanova’s Frozen—was compelling. That said, I will say that even set during a time when women were struggling for the right to vote, I found it a stretch that she suddenly became independent enough at 16 to leave home and survive intact in Kettle Falls, even for a short time.

Although I am from Minnesota, the knowledge that the fight to save the forests and waters of northernmost Minnesota against unyielding industry began so long ago was fascinating. I think we all like to believe our generation is the one that began the quest to save the world from itself. As the story evolved, I could picture the scenery and situations that unfolded, which really brought the story to life for me. While Frozen appears to be a suspense, it is apparent almost from the beginning how it would resolve itself. However, the side stories were also interestingly parallel to issues I read about today.

The discovery of Sadie Rose’s grandparents was a pleasant surprise. This is something I look for in an author—the unexpected elements. It’s not easy to surprise me.

I found Frozen to be an interesting portrait of Minnesota history while exploring the very realistic personal history of one woman.