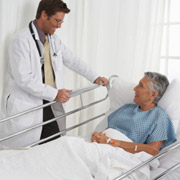 January 4, 2011 will likely mark a significant day in Minnesota health care history. It’s the day Governor Mark Dayton opted the state into the federal Medicaid expansion, providing Minnesota with roughly $1.2 billion (or $1.3 or $1.4; more on that later) more in Medicaid funding.

Minnesota Care is a publicly subsidized program for Minnesotans who do not have access to affordable coverage. First implemented during Gov. Arne Carlson’s administration, the program now serves more than 100,000 people each month.

The program has been an insurance safety net for the working poor. Clients pay premiums based on a sliding scale, with a 10% co-pay. College students and the working class tend to be MinnCare’s main clients. It has some limitations, only covering up to $10,000 annually for most inpatient hospital care.

GAMC is another state-funded program for low-income adults, 21-64, who have no dependent children living with them and do not qualify for federally funded health care programs. GAMC enrollees all earn less than $8,000 per year, and 80 percent suffer from mental illnesses, chemical dependency, or both. Sixty percent have chronic medical conditions and about 8,000 are veterans. With a monthly average of about 30,000-40,000 recipients, GAMC serves the smallest number of the state’s major health care programs. GAMC patients have no co-payments and have no coverage limit.

In 2010, then-Governor Pawlenty attempted to completely eliminate GAMC through unallotments and roll about half its patients into MinnCare. This would have left up to 17,000 patients without coverage. These cuts would have severely impacted preventive care and put a greater burden on emergency rooms across the state. Instead, legislature hashed out a compromise, restructuring GAMC’s funding. Hospitals that could still afford to take GAMC patients can now opt in to lump sum state funding, but can no longer charge per-procedure fees.

Unfortunately, these funds don’t come close to covering hospitals’ operating costs. As a result, only four facilities currently serve GAMC patients, all of which are located in Hennipen County. They make for a long and sometimes impossible drive for Bemidji, Virginia, Austin, and other outstate Minnesotans.

Medical Assistance is Minnesota’s Medicaid program. Of the three major coverage programs, it serves the most by far, more than 500,000 Minnesotans per month. “More than half of those are children and families; the remaining are people 65 or older and people who have disabilities,” according to the program’s website.

Costs on the rise:

Currently, Health and Human Services spending is about 30% of the state’s budget and costs have soared in recent years. Medicaid’s near doubling in enrollees in the 2000’s is often cited as a main cause for cost spikes. More troubling are MinnCare and GAMC, with enrollee increases of 3.6% and 43% respectively from 2001 to 2010, still seeing their cost more than double in the same period.

The solution so far:

The new federal Patient Protection and Affordable Care Act offered early Medicaid expansion for states covering childless adults. Minnesota is one of 11 places, including Washington D.C. qualified to opt-in before the law takes effect nationally in 2014. Dayton signed this into law after Pawlenty refused.

Opting-in means about $1.2 billion more in federal funding for Minnesota this year. It costs the state $410 million from the general fund. However, this is offset by an estimated $465 million saved from the state’s Health Care Access Fund, which helps pay for MinnCare through a tax on health providers.

Medicaid expansion allows former GAMC patients and many on MinnCare with incomes up to 133 percent of the federal poverty guidelines to qualify. GAMC will therefore be phased out and MinnCare greatly reduced. The new federal funds will be dedicated to hospitals, clinics and providers whose state funding was cut last year. Indirect effects include boosting local economies by retaining and creating tens of thousands of health care jobs, especially in rural communities. It will also potentially stymie further cuts to health and human services budgets.

State Medicaid director Brian Osberg says it will take nine months to implement the overhaul. Part of this is due to some 50,000 physical records that need to be hand entered into the state’s database and new training for staff. This is further complicated because our health care systems are run by each county.

This delay could cost the state up to $300 million in federal funds depending on how much time passes before the state can fully implement the expansion (hence the $1.2 versus the $1.4 billion you’ve been hearing lately). Dayton has called this delay unacceptable and ordered the department of human services to speed up implementation.

Compared to the rest of the nation:

Minnesota is relatively unique. It’s only the third place to take advantage of the opt-in. Many states have been trending in the opposite direction–fighting federal reform.
The time for ideological bickering here is over. It’s not about whether we should or shouldn’t take the federal money. We have, and our early entry into federal health care’s reform will provide the boost we need to once again be the nation’s model. Conservative “no new tax” policy caused us to slip from that position in recent years.

Moving forward, we must use federal funding to expand coverage, implement more preventative care, and establish systems that better coordinate health services. We can’t let this cash infusion serve as a simple state-to-federal cost shift. The state must remain committed to its tradition of strong health care investments. That’s the only way we’ll maintain our nation-leading health care status.