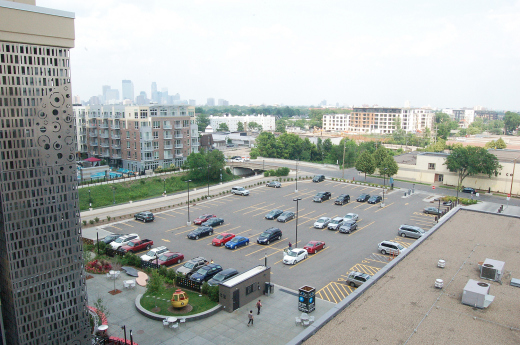 This northeast view shows the location of Phase II (parking lot) from the parking ramp of MoZaic Phase I. The Midtown Greenway is at left center and the Lagoon Theatre is at bottom right. (Photo by Bruce Cochran)

In June the LHENA Zoning & Planning Committee listened to a proposal by Perkins & Will architects, describing Phase II of the MoZaic project at Lagoon and Girard Avenues. Although the design process is still in its infancy, the presentation provided a rough outline about where the Ackerberg project may go.

In March the Ackerberg Group initiated a dialogue with LHENA to elicit commentary and community engagement for Phase II. From that meeting six requests were clarified by architect Tony Layne, Co-Director of Sustainability for Perkins & Will:

In order to allow a “porousness,” described by Layne, the three long buildings in the design run east to west with glass-covered atriums that allow not only sunlight, but a heightened visual and pedestrian experience.

The three buildings with mostly northeast views step back from the Midtown Greenway with a three-story north structure, six-story middle structure and eight-story south structure.

Still in the concept stage, the proposal naturally lacks logistics like bus and pedestrian pathways, and parking stall totals. Ackerberg stated that Phase I has more than enough space to take any overflow from Phase II.

The first floor will likely be retail with office space taking up the rest of the project on the above floors. Until final negotiations for the plan are complete, specific tenants won’t be known.

“I like the way this building looks. I love Core 10 (steel building material) and your strategy of breaking it up. It’s playful and fun,” exclaimed Z&P member and architect Burt Coffin.

In describing the site’s three buildings, Layne said this approach “helps to break up the massing of the space so the final look has a less box-like feel.” The east and west ends of the three structures are the few visibly covered opaque walls. Covered with Core 10 steel, which will eventually rust to a “rich patina,” the walls are shaped like abstract ‘S’s, so they offer a contrast to the other heavy glass treatments.

Morning and evening light is harder to control when it comes in at straighter angles from the horizon, so the this plan incorporates design aspects that increase daylight’s capture in the building: covered east and west walls on the building and expansive glass on the north and south side walls, bolstering the buildings environmental tact.

Because of this design, the building allows more flexibility for build-outs with various sizes of client spaces–including possible bridge connections between upper floors over the atriums below. “This goes a long way to be able to meet the needs of businesses as they grow. This is not a 10- or 15-year building, this is a 150-year building,” Layne added.

Still under review are other possible amenities, including a green roof and a covered pedestrian connection across the Art Park, between the Phase I and Phase II buildings. In addition, a bike/shower/locker component, according to Joanna Hicks, Director of Development for Ackerberg, may be added if Ackerberg can secure Hennepin County funding.

Making some strong architectural statements, this first proposal for Phase II takes some risks. But the plan is still in its infancy, and whether the final project follows this initial design will depend on final tenant contracts and the community engagement process. Summing up the proposal, Stuart Ackerberg said “this is a lot more expensive but I feel it’s the right thing to do.”

The Ackerberg Group hopes to have a more concrete plan to present to the neighborhood and City Planning Commission, once more tenants are confirmed, by fall of this year.