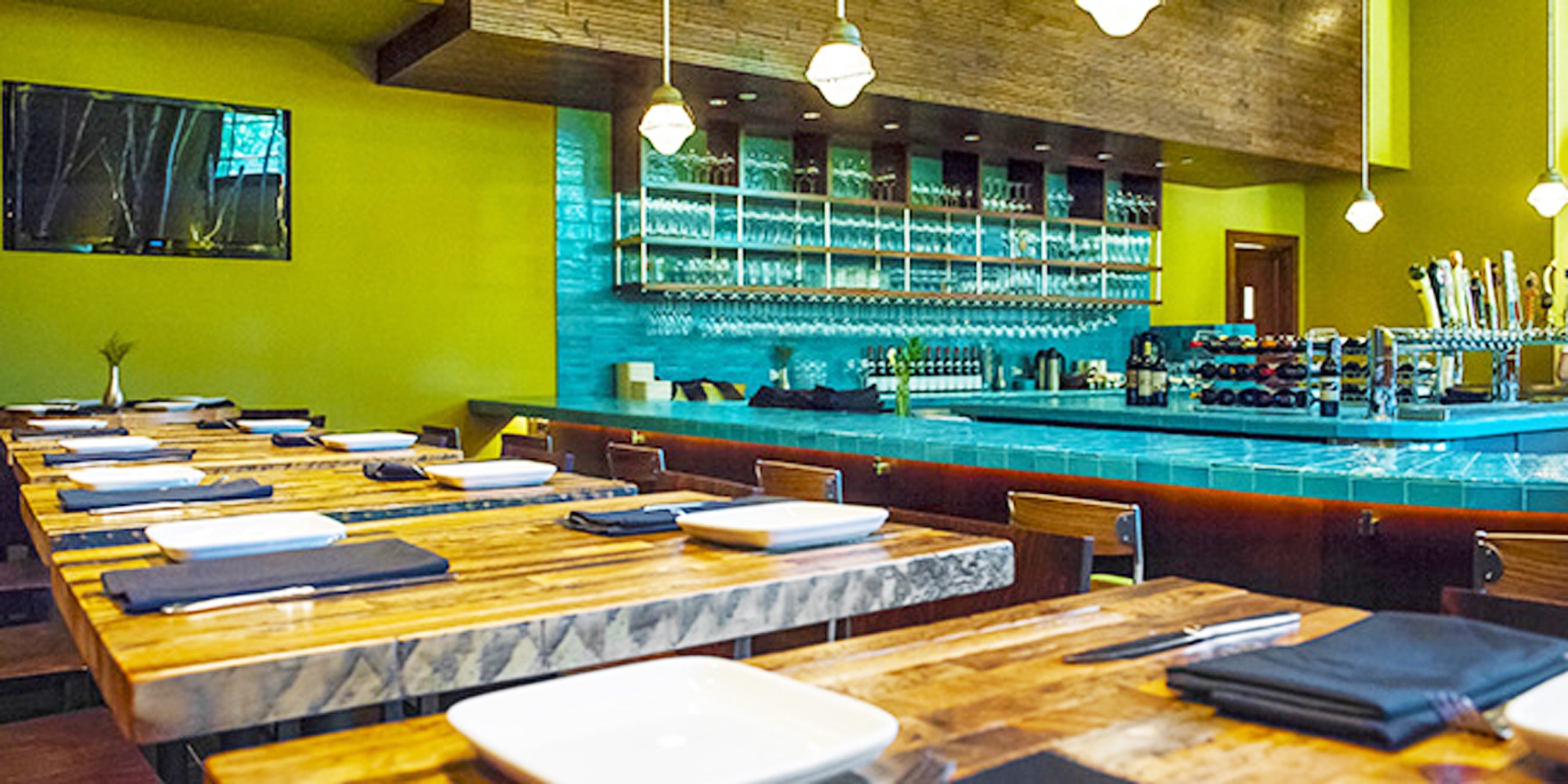 Monday morning, and we’re hungry. So hungry a bagel won’t do. And neither will dishwater coffee. Sooo—picture a scene in a Woody Allen movie—we’re driving around South Minneapolis—Patisserie 46, Lynn on Bryant, Lucia’s, braking only for their “Closed on Mondays” signs. Finally, I remember: Yeah, French Meadow! And then I remember something even better: its new sibling, Bluestem, joined at the hip to its older sis. Bluestem ditches the elder sister’s hippie vibe in favor of a clean demeanor that could hold its own in L.A.: the minimalist-chic of earthtone walls accented with birch saplings for a made-in-Minnesota look and tiles in Superior blue dressing the curvy bar.

The lunch and dinner menus are a 2.0 version of French Meadow’s (which, itself, has leapt far beyond those early sprouts-and-tofu days). But, rest assured, breakfast is just as luscious, only truer to its roots. First, I ordered a cappuccino big as a swimming pool, then a flapjack of crunchy cornmeal dotted with blueberries that lapped over a dinner plate. Add a splash of maple syrup and you’ve achieved nirvana.

Stealthily, the Meadowlarks remain true to their mission: healthy, good-for-you eats disguised as photos from Gourmet Magazine. And, let me add, the menu is as tasty as it is inventive, including dishes for vegans (if the rest of us don’t nab them first). Burgers, too.

In a flash of déjà-vu, I recalled a delicious dinner here a few weeks ago, relaxing amid those cushy booths. That night, we’d started our adventure with a trio of rustic tartines (apps $9-12). Crispy toasts bolstered a creamy melange of hummus and avocado; artichokes, looking mild as that ubiquitous dip, but smuggling a cache of hit-me-again jalapenos; and a classic slice of Pacific smoked salmon with dill, unctuous as all get-out, and every bit as luscious as those I’d gobbled throughout Scandinavia last summer.

When asked our server’s opinion of the Wild Acres duck confit flatbread, she nearly swooned. I took that as a “yes,” and was not mistaken. The thinnest of crusts came laden with arugula, whose spicy bite balanced the rich fattiness of the duck, abetted by a drizzle of cream cheese hopping with horseradish and tendrils of (supposedly) pickled ramps (today, sweet-sour onions, and no complaint).

We should have called it quits after those two generous starters, but no. And I’m elated we abandoned any pretense at seemly restraint, for we’d have missed two terrific mains (entrees $10-21). First, a pair of fish tacos to end all fish tacos: moist and tender, lightly-blackened tilapia glistening under heaps of slaw, radish rounds and cilantro, all sparked with a lively lime crema. (We used our extra limes to awaken a side dish of sautéed beet greens—on its own, simply dull and bland, I’m afraid.)

But the star of the evening was the chicken and waffle plate, an edible work of art straight out of a Southern farm kitchen. The tender, full-bodied corn waffle supported a huge slab of chicken breast, juicy beneath its light jacket of cornmeal that sped it through the fryer. It’s then topped with a scoop of creme fraiche, big as an ice cream cone, and a peppy drizzle of chipotle hot sauce. But what makes this dish really click is a pink-peppercorn syrup. As my companion gushed, “Do they sell it by the gallon?”

Already twice my original dress size, I decided to pass on dessert—until we read the menu ($6-8). Who could resist a salted caramel and Scotch whisky custard? Not me. And don’t you, either. The topping is almost too solid to pierce, thanks to its stay in the fridge, but beneath it, pure heaven. And that doesn’t count the bonus of icebox cookies and plate painting of chocolate. (Or order many of the fantasies that appear in the Meadow’s pastry case.)

That night, I sipped a crisp rose, one of many fine wines by the glass—a swell toast to the delightful new café.