A series of four identically-sized spaces, divided by doorways, and laid end to end, is marked out by hung walls of diaphanous blue silk inside one of the new galleries at the Weisman Art Museum at the University of Minnesota’s Minneapolis campus.

The panels move slightly with the air in the gallery, creating a light and mobile space. It is incongruous to see an ancient, time-marked Korean bride carrier in the nearest of the four rooms, and an equally ancient and solid Korean traditional kitchen cabinet in the last room. The connection happens for the viewer in examining the interior silken walls. Each has a complex network of seams forming a geometric pattern of translucent rectangles in white and blue, mirrored in the facades of the bride carrier and the cabinet. In some of the rectangles are photos, also diaphanous, as if from dreams mixed with memories, of many Korean faces. Most are old photos taken of people at important points in life – weddings and other family gatherings, as well as photos after immigration.

The room with the bridal carrier depicts brides and weddings. The last room, with the kitchen cabinet, holds photos of people with their extended families. The rooms in between depict young adulthood, and growing families.

Artist Eun-Kyung Suh was asked to work with the Weisman’s Korean furniture collection, donated by Edward Reynolds Wright, Jr., to create a work that would reinterpret the collection through her own work. She is one of four artists who have been charged with relating their own work with some aspect of the Weisman’s collections for an exhibit called Sympathies. Through this exhibit, the permanent collections can be seen in a new way.

Suh was invited to work on the exhibit that would mark the reopening of the Weisman on October 2. The museum has been closed for a year due to a renovation and addition, which resulted in an 8,100 square foot addition. The addition doubles the available gallery space. Noted architect Frank Gehry, who designed the original building, also designed the addition, which houses the new galleries, shaped like giant lilypads seemingly sitting on a pond of air. There was no new land to use for the Weisman addition, but the architect made it work anyways.

Suh said she did not set out to build a piece of art about women’s lives, but “it flowed that way.” The project involved a lot of patient sewing, with 18,000 yards of thread, to be exact. She wore out two sewing machines, using 550 yards of silk organza for her panels. 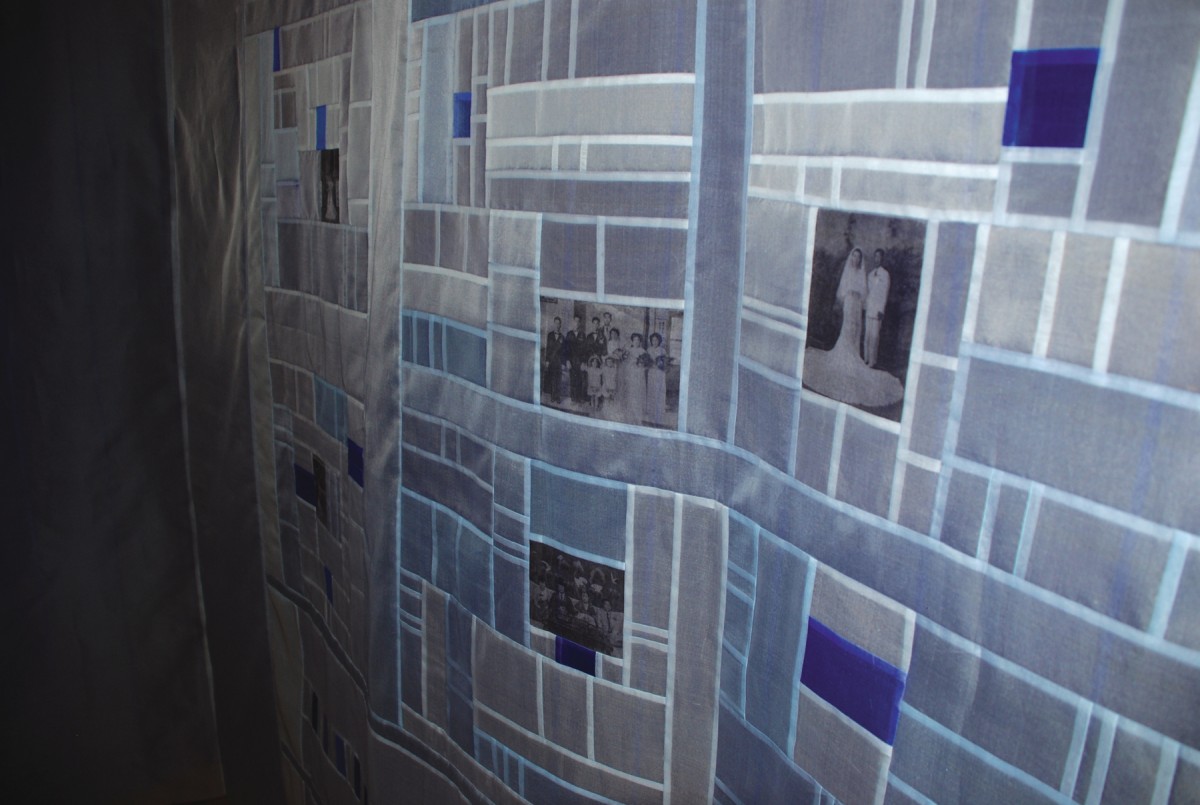 Employing traditional women’s labor, with women’s materials, the artist made a women’s space – anchae in Korean – the interior, more protected suite of rooms for women in a traditional house. The patterns she transferred to the silk panels mirror the traditional geometric patterns of furniture commonly used by women; the bride carrier, the kitchen cabinet, and two different household chests used for clothing storage. She used the patterns, but not the chests, for her installation. The installation is entitled Anchae.

The artist reached out to the Twin Cities Korean American community for resources, mainly for old family photos. She got help from Yoonju Park at the Korean Service Center, the members of the Korean American Women’s Association, and from Korean Quarterly, among other sources, giving her creation a distinctly local connection. Previously, Suh had used a technique to laser print photos directly onto fabric. She used the same technique in the Weisman exhibit. She also read books about Korean immigration to the U.S., a group she did not know very much about. Now raising her daughter in the U.S., she finds that she has inadvertently joined the group she set about to research.

Suh moved to Duluth in 2002 from the University of Iowa at Iowa City, where she earned a Master of Fine Arts and a Master’s degree in design. Upon graduation, Duluth was one of the places that offered her a teaching position. Before coming to the U.S., she graduated from Ewha Woman’s University in Seoul.

She did not have any connection with the Twin Cities Korean American community before she started the project. Making those connections has been a positive outgrowth of the project for her personally, she said. Many people put volunteer hours into searching out and sending her copies of old photos for the collection she chose from, which made this exhibit a success, Suh added.

Suh teaches some of the “foundation courses” in design, such as basic three-dimensional design, that produces things like chairs and light fixtures. As an artist, Suh is going a dimension beyond what she teaches her students, linking depth, width and height with a fourth and less predictable dimension involving emotions, memory and the subconscious.

Head curator Diane Mullin noticed the artist’s work because of an exhibit evoking bojagi, the traditional wrapping clothes of Korea, at the Metropolitan Museum of Art in New York. The exhibit made use of traditional ideas of the “five elements” of the world, in Eastern thought, and their corresponding colors – black, white, red, yellow, and blue, according to Suh. Traditionally, the finest bojagi were made to store sacred, ritualistic, and royal objects, such as the umbilical cord of the prince, Suh explained. But most bojagi were for practical objects – food, laundry, gifts, and anything else that needed to be wrapped. Bojagi cloths were ubiquitous in Korean society, yet anonymous women artists made them unique and pretty, even when made from scrap fabric. Mullin noticed Suh’s bojagi exhibit which evoked memory and history, and thought Suh might be a good fit for an artist to work with the furniture.

In a separate exhibit, a selection of the same Korean furniture collection will be shown in one of the new galleries for the next three years, sponsored by the Korea Foundation, an organization based in Seoul, according to Weisman director Lyndell King.

King knew furniture collector Edward Reynolds Wright, who was primarily a political scientist and had worked in Korea for the Fulbright Foundation. He collected the furniture some 10 to 15 years after the war, at a time when “a lot of families had to sell off their heirlooms in order to keep themselves alive,” King said. Wright had many University of Minnesota connections, and most of the collection was bequeathed to the University of Minnesota. Other pieces were sold, and the proceeds of those sales formed a Wright fund, which finances projects like Suh’s installation, King said.

There are a number of pieces that originated in what is now North Korea. These are more decorated with metalwork, King pointed out, because tree varieties are scarcer there due to the cold climate. Furniture of southern Korea origin tends to use designs based on wood grain, according to King. She cannot prove it, but King believes the Wright collection is the largest and finest collection of Korean traditional furniture outside Asia.

Additionally, during the first two years of the new galleries, some of the permanent collection of ceramics and a selection of the works of Minnesota artist Edith Carlson will be displayed. Some of the ceramics are of Korean origin, but there are samples from many cultures, King said.

There will also be an ongoing interpretive exhibit about how the Weisman’s various collections were acquired. Right now, there is also a display of the works of finalists in the competition to design a new plaza for the east end of the Washington Avenue pedestrian bridge.

Suh’s textile piece will be exhibited until May, along with the exhibit by Sharon Louden who created a Sympathies idea to evoke the work of Weisman architect Frank Gehry. Louden’s work is a profusion of metal waves made by individual pieces of silvery and colored metal, reminiscent of the metal exterior of the Weisman.

Turning fabric into a piece that reminds us of memory and history is a difficult task, but Suh liked the process – the repetition and the patterns, like the repetitious nature of jobs women do daily. As an artist, and mother, who also teaches full time, Suh has a realistic notion of how little time most women have for the creative process, and of how most creative women have practiced their craft in obscurity.

The blue panels, with their slightly shifting shapes, and faintly printed family photos, hint at lives lived in a place and a time so removed that it is becoming hard to remember. This was another tricky part of the artistic process of this installation; trying to depict the vagaries of memory and history.

Suh feels the effort was successful because the end result is not solidly visual – the eye is tricked. Memory is “bumpy,” she said. Our memories work unreliably, storing some moments and jettisoning others. Suh’s Anchae installation reminds us of this. “Representing a woman’s life is always hard,” the artist reflected. “It is moving and changing, and organic.”