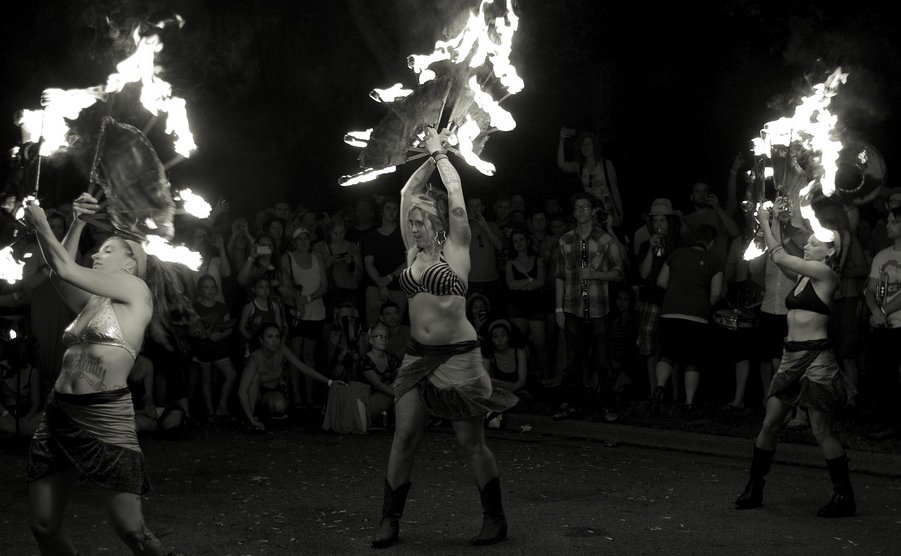 Before I start with my opinion of Minneapolis’s Bastille Day 2013 I should let you know that, as usual, my expectations were unusually high. Perhaps I shouldn’t have read the Bastille Day Wikipedia page before attending; it’s blatantly clear that Minneapolis is nothing close to France in regard to aesthetic or tradition.

It’s also fair to say that I’ve been getting a little fed up with the events in this city. It isn’t that I don’t appreciate them—there are plenty of cities and towns that have very little if anything going on, and I’m fortunate to live in a city that has so much going on, but I’m vexed with attending art shows that feature DJs playing music so loud that you can’t hear yourself talking about the art, or block parties where the only thing anyone shows up for is the beer.

Bastille Day was a disappointment when, in the wake of the Zimmerman verdict, I really needed something to perk me up (though it’s an unfair request to ask of any event to make me feel better about something like that). I’m well aware that this isn’t going to be a popular opinion, and you’re more than welcome to respectfully disagree.

I went to Bastille Day on a very specific mission: to find French pastries for my mother, who insisted they would be there. The only food Barbette was serving were burgers, fries, hotdogs, and beer which is basically the typical American menu for the summer—and every summer before. There were bands playing, some I liked and some I favored less, and there were vendors selling clothing and more beer and food. That was pretty much it as far I could see. I left after a while and it’s definitely possible that something more exciting and thrilling happened after I left, but it wasn’t enough to grab and hold my attention long enough for me to stay for anything more. As for the pastries, I just bought some from Turtle Bread. My tastes weren’t very discriminating by the end of the day.

I expected Minneapolis’s Bastille Day to be more like a French Renaissance Festival for grown-ups, and this is due to the fact that I had never attended one before. I expected burlesque and cabaret, costumes and decorations; I expected to be transported to Paris with food, drink, and overall theme (see, I told you my expectations were high). I guess I just figured, given the name of the event, it would’ve been more imaginative in that same regard. Bastille Day commemorates the storming of the Bastille in 1789, which was a reaction to the abuses of the monarchy at that time and was an uprising against the royal authority that the Bastille itself represented. That imagery is very evocative and powerful—especially given our current social and economic climate—and there are plenty of ways to intertwine that chunk of the past into a more inspiring event in our present.

I know that there are a great deal of expenses to be accounted for in the hosting of such events. Food, entertainment, and venue are things that don’t come cheap, but I would’ve like to see something more concept-heavy. Maybe because Bastille Day isn’t a traditional American holiday we don’t put the same amount of emphasis on it as it doesn’t play as profound a role in American history. However, if we are going to choose to celebrate it, we should try to be true to at least some of its historical relevance—if for no other reason than to make it more interesting.