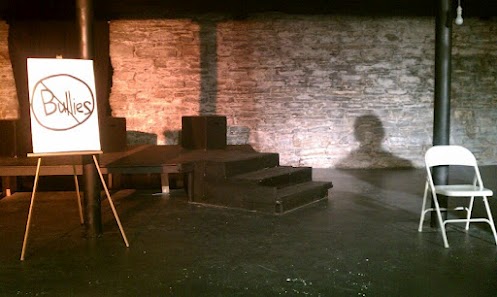 I am not a bully. Despite my stint in fifth grade of pushing fourth-graders into snowdrifts and calling them stupid, I have never been, nor could I ever be, a bully.

At least that’s what the doctors from blank slate theatre’s original production of Analyzing the Bully told me. Bullies, to them, can only be males under the age of 20 who are athletes, bigots and homophobes. Bullies always use force, wear torn jeans and black shirts, and have no reason for their “random” acts of violence.

Directed by Adam Arnold, the meticulously researched play follows the analysis of a supposed bully named Thomas (Ryan Levin). Before the bully is introduced, the doctors (Nick Selness, Taylor Hall, Stephanie Kahle) distribute “access passes” to keep the bully at bay, like a cross toward a vampire. They take every precaution to dehumanize Levin’s character, even leading him to the interrogation room with a bag over his head like a murderer to his execution. Although the metaphor is a bit forced, the message relates to the real world bullying debate. Bullies are labeled, and publically humiliated for their crimes. Doesn’t making bullies feel like outcasts only exacerbate their situation?

Through the doctors’ questions we learn that Thomas brutally assaulted a classmate. Flashbacks show Thomas’s troubled home life. It’s a credit to Levin and the ensemble cast of teens that they inspired so much empathy for Thomas. His father died in the Iraq War, his stepfather is abusive and his mother turns a blind eye. At school his teachers patronize him for disagreeing with their methods, touting a “zero-tolerance policy” and being disgusted at Thomas “lack of respect”—terms heard so often from pundits and school administrators. The authority figures in Thomas’s life saw him only as a bully, not a kid who needed help. One can’t help but wonder if the assault could have been prevented if someone had treated Thomas with understanding.

As powerful as the play’s message is, the script still needs a good polish. Lines about smoking pot with embalming fluid or referencing the Columbine shootings are obviously meant to be edgy, but come off as disjointed and distasteful. In addition, we hear little from the victim’s perspective. Without the key voice of a victim, the play could be misconstrued for excusing Thomas from his crime. If the point of the production is to contextualize the issues of a bully, then dealing with the victim’s pain is still a part of that context.

Though the play’s public run at blank slate’s St. Paul space has ended, Arnold and his team from blank slate theatre plan to workshop the play and perform for schools and seminars. Analyzing the Bully will be performed later this year for staff of the Anoka-Hennepin school system.