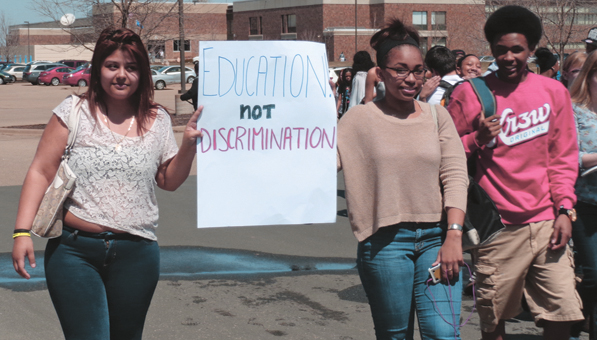 On April 26, Black Hopkins high school students walked out during the school’s last hour of the day. They complained of unfair treatment when it comes to disciplinary issues.

“We want equality. We are here for an education,” says Junior Malika Musa, who co-organized the protest with fellow 11th-grader Maray Singleton. “[School officials] are not really trying to acknowledge that we have these problems and that we need to change,” adds Singleton.

But Hopkins is not the only Minneapolis suburban school with higher suspension rates among Blacks. Black student suspension rates are at least two times higher than any other student group in over a dozen Twin Cities suburban schools. The MSR has obtained and examined 2009-10 federal Civil Rights Data Collection (CRDC) suspension data and found 12 of 13 Hennepin County suburban school districts had disproportionately high Black out-of-school suspensions, which are defined as more than one school day and no more than 10 consecutive days away from school. 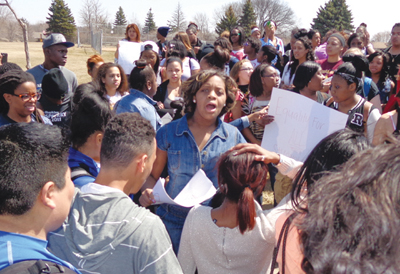 The MSR contacted Bloomington, Robbinsdale and Hopkins officials for comments.

“Our data shows a total of 139 [rather than 145] Black students who were suspended at least once for that (2009-10) school year,” responded Bloomington spokesperson Rick Kaufman. “We do not know where the federal data comes from, as it is not consistent with any figures Bloomington Public Schools and the Minnesota Department of Education (MDE) have compiled. Bloomington has one of the lowest rates of suspension for Blacks and for all racial groups.”

However, 139 suspensions are still 45 percent of total suspensions in a school that was 17 percent Black.

Robbinsdale Education Services Director Lori Simon said her office has worked to reduce suspension rates since her hiring in 2010. “One of the very first things that I did the first school year I was in the district,” she recalls, “was to look at our [suspension] data and what MDE [the Minnesota Department of Education] had brought to us as concerns. It was pretty evident to me that we needed to do some things differently.”

Her district, however, did not provide any data as requested.

Anoka-Hennepin also did not meet our requests for data by press time, but a district spokesperson told the MSR that they are still compiling district data and will provide it when available.

A single suspension “follows” the student even after they leave school, explains University of St. Thomas Law Professor Nekima Levy-Pounds. “If a child decides that they want to become an attorney, they are going to have to report that suspension to the particular [state bar] they are applying [to],” she points out.

“Even if they did something when they were much younger, they still have to report that on their bar exam application,” she explains. “[It] can have a huge impact on whether they are able to gain employment, find suitable housing, or even pursue higher education.”

Levy-Pounds adds that there is “a disconnect” with mostly White school officials and teachers on how they handle discipline matters that involve Blacks and other students of color. She admits that the high Black suspension rate in Twin Cities suburban schools is alarming but shouldn’t be too surprising.

“Although we have had an influx of students of color to these schools in the suburbs, presumably in search of a better education that they feel they won’t get in the city, the problem is that many of these suburban school districts are resentful toward these students,” she continues. “Many of these students of color…are seen as draining the resources of a particular school, especially if there is the perception that they are not performing as well on standardized test scores and bringing down the overall quality of the school district.

“Because of those perceptions and misconceptions, and the resentment that’s there, this is producing an incentive to push kids [of color] out of the classroom and ultimately out of the school as a whole,” says Levy-Pounds.

Eleventh grader Thurian Johnson, Jr. says that whenever an incident involves a Black student and a White student, “They [school officials] get the White kid’s side of the story first, then most likely I’d be the one who gets suspended.”

“I am working with [them] to pursue this issue until we see some policy changes happening and until we see that teachers and administrators are being trained in having higher levels of cultural sensitivity and cultural competence,” she states. “It seems to be a breakdown [at Hopkins High School], and it is producing an inequitable result, particularly for Black and Brown children.”

“We like going to this school,” says Johnson. “We like the environment, but if everything doesn’t match up to our liking, then we are going to do something like this — protest.”

“We need some change in some way,” says Hopkins 11th-grader Ellse Anderson. “It’s not going to happen right away, but it needs to start. I have one year left, and I would like to see change here.”

“We are also experiencing reductions at the high school this year in our percentage of students of color who are receiving suspensions,” claims Hopkins spokesperson Jolene Goldade.

Next week: The MSR has obtained 2010-11 and 2011-12 discipline data from the MDE. In our next story, we will look at what these schools have done to reduce Black student suspension rates and whether it is working.