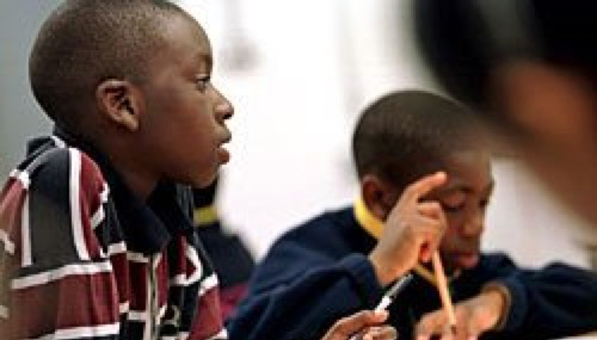 Although these districts reported lower Black suspension rates than other Twin Cities-area schools that the MSR has analyzed in previous reports, the rates, ranging from 13 to 37 percent, are still at least twice the overall Black student enrollments. The statewide Black suspension rate during the same period is 39 percent.

None of the districts the MSR contacted was able to provide breakdown data on the types of negative behaviors that produced these high rates of Black suspensions. A UCLA report released in April points out that nationwide most suspensions of Black students fall under the “insubordination” category.

University of St. Thomas Law Professor Nekima Levy-Pounds told the MSR that she is disturbed by what she calls “a misuse of discretion” by teachers and administrators regarding Black student suspensions.

The North St. Paul-Maplewood-Oakdale district’s Black suspension rate is 27 percent (541 of 1,986 suspensions). “Those numbers are accurate,” confirmed Assistant Superintendent Troy Miller, who added that along with the district’s educational equity office they are “actively working to address” the issue. “We are aware that our rate of suspensions is disproportionate for our Black student population [15.6 percent].”

“I would like to see the evidence that it is as effective as the schools are saying,” stated Levy-Pounds of PBIS. “Obviously, if it is effective then it is something that should be utilized more regularly.” However, the professor added that she believes that schools tend to hire Blacks and other persons of color solely to run PBIS and similar type programs.

“These same people are not in front of the classroom, teaching the students,” she noted. “It’s almost like people of color are being hired to help control the behavior of students of color, yet they are not being given equal opportunity to either teach those students of color or serve in leadership [positions] in a particular school district. This is almost like a two-tier system being created, even among those who work inside of the school system.”

“Including kids and families in all conversations” regarding the issue of reducing suspensions also is important, stated Olson-Skog.

“We have made a significant effort to promote inter-cultural competence for all staff and to hire staff of color,” said Miller. “Our site-based equity and leadership teams are working to address this issue by strengthening family connections, making home visits, and working to build partnerships within the community.”

Along with Culturally Responsive Teaching, professional and leadership development, North St. Paul recently received an “Alternatives to Suspension” grant to specifically address the suspension issue “over the next five years.”

“We will continue to monitor this issue at a district and school level,” said Miller. “We still have work to do in this area, and we are committed to ensuring that all students have the opportunity to succeed.”

“I think the paradigms that are being used to address the [suspension] problems in our public schools are off base — they’re flawed,” said Levy-Pounds. “When these kids aren’t in school, it is actually hindering their academic achievement because they are spending days at home. Maybe they are roaming the streets or sitting and watching television. Maybe they are engaging in unsavory activities because they are unsupervised while their parents are at work. They definitely are not learning.”

Levy-Pounds also warned against any “one-size-fits-all” approaches to solving the Black suspension problem. “They need to look specifically at what’s happening to Black kids in terms of how they are applying their disciplinary policies and whether the teaching is effective to meet the needs of these students,” she said.

“We believe we are making progress,” said Olson-Skog. “We’ll know more after we analyze this year’s data. The entire district — from the [school] board down — is aware of and committed to addressing the issue.

“We will not be satisfied until we remove the racial disproportionality of suspensions,” Olson-Skong, stated. “Our belief is that [Black] suspensions will go lower as we build stronger and stronger relationships with families and students.”

This story is fifth in a series. Next: A final look at district initiatives on reducing Black suspensions