It occurs way too often that historians treat accomplishments by Blacks in illusionary ways. Marc Hugunin’s six-page article in the Winter 2012 “Minnesota State High School League [MSHSL] Bulletin” commending 100 years of Minnesota high school basketball tournament includes what is barely a paragraph — 83 words — on the historical contributions of Blacks in both boys’ and girls’ tournaments.

“We are not a significant part of the population,” says retired basketball official Jim Robinson as to why such errors and omissions occur. “That’s the general feeling of people who are not of our color.” 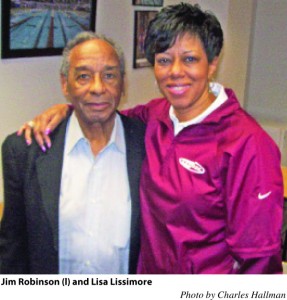 First off, Hugunin was wrong when he said no Blacks played in the state tournament before 1951. We found a copy of the 1948 state boys’ tourney program that showed two Black teammates, Leon Combs and Curtis Russell from Region IV champs St. Paul Marshall, three years before Bob Wagner of Hopkins made consecutive tournament appearances in 1951-52.

Now-defunct Marshall “was in the heart of St. Paul’s Black community, yet there were only two African American [players] on the team. I don’t know why that [was],” notes MSHSL Associate Director Lisa Lissimore.

Robinson tells us he watched Combs and Russell when he was a little kid growing up in St. Paul. “They were guys I looked up to,” admits the first Black official to work a state tournament game (1971).

He recalls the tourney contest involving Minneapolis Central, which had several Black players. “Most people weren’t aware that the kids played a little bit different in the inner city, and they happened to be much quicker than everybody else. Even in 1971, people weren’t ready for that kind of basketball.”

Robinson’s historical place came several years after St. Paul Central’s Leroy Gardner and Jim Hill (1965 and 1967) ended an almost two-decades absence of Black participation in the tournament. Hill was “probably the smartest basketball player that you ever want to see in the state tournament,” the referee points out.

“I was a kid at 15 years old just happy to be able to continue to play and extend our season for another three games,” remembers Lissimore, a starter on the Central championship team. “I feel blessed to have won the tournament — we were up against teams we either scrimmaged or played during the regular season…

“Benilde-St. Margaret’s [who Central defeated in the finals] beat us in a Christmas tournament, ironically by the same score (49-47) that we won with in our championship game against them,” she continues.

“They were one of the few teams that honestly could run with us, and they were just as tenacious on defense as we were. They had equal offensive power, and they could flat-out play with us.”

“When you talk about the smooth guards and the people being able to handle the ball, that’s the role she played,” says Robinson of Lissimore. “She always has been the most athletic of the whole group…who can do a lot of things that the rest of them couldn’t do with the basketball.”

Lissimore’s teammate, center Linda Roberts, “was almost always the tallest player on the floor,” says Lissimore. Although Roberts would go on to become the U of M’s all-time leading scorer as a Gopher, “she was not that player in high school,” Lissimore explains. “She [Roberts] didn’t like to shoot the ball that much. What she loved at the time was rebounding — she would get most of her points off put-backs.”

“You don’t know the significance until years later,” says Roberts, who along with Lissimore and Rita Burch was named to the all-tournament team, a historic first that three Black females were so honored. “I don’t recall seeing many African Americans on the other teams in Class AA. We were just excited to be there, and playing in the championship game was overwhelming.”

Lissimore, now the tournament director, wants to see more city schools reach the tournament on a regular basis. “Basketball is one of those sports that we have claimed and owned for a long time. It’s a huge significance in our community,” she surmises.

And Blacks have had a huge significance in the history of Minnesota state basketball tournaments as well.

A Black woman in 1990 was the first female to coach a Division I men’s basketball team. Name her. (Answer in next week’s “View”)

Answer to last week’s question: CCNY in 1951 was the first team in history to win both the NCAA and the NIT in the same season with Black starters.