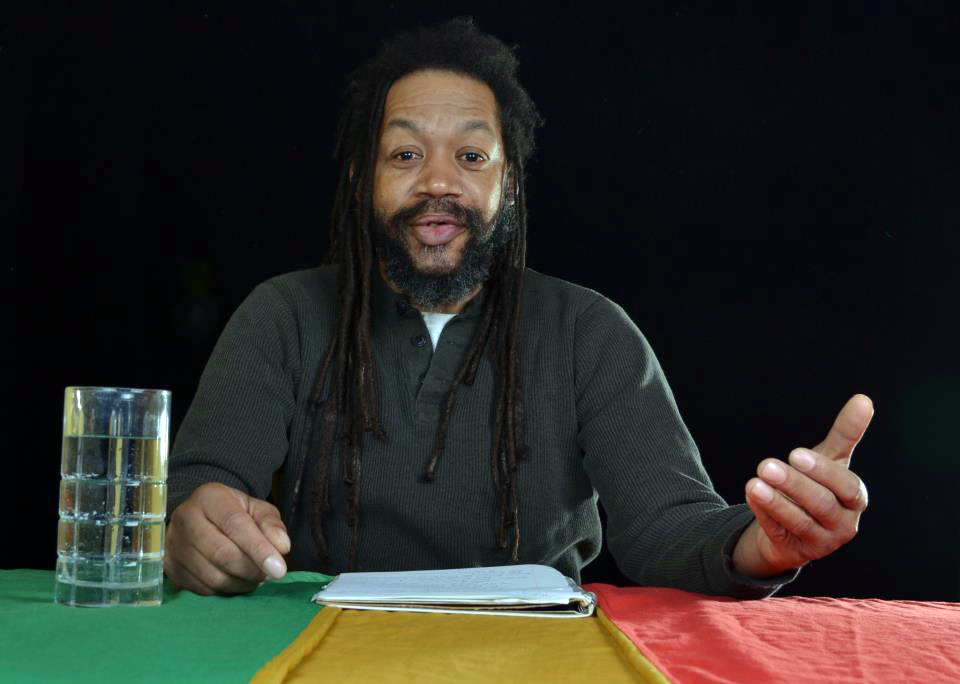 When spoken-word-artist/playwright/actor David Daniels told me a couple or so years ago that he was going to retire, I took the news with considerable disappointment. After all, the infamous and beloved Rasta Bard is truly is one of a kind.

To elucidate, Daniels is infamous in that there are easily a half-dozen reputable Twin Cities venues where he’s no longer welcome to perform, because his performance can be a bit more authentic than mainstream sensibilities permit. When a script of his calls for smoking ganja, there are vegetable cigarettes he could use as a stage prop, but David Daniels does no such thing. He lights up the real thing. He’s beloved as a maverick spirit holding over from the storied counterculture of eras ago.

Retirement ultimately turned out to not be in the cards, something for which his fans, most of them with lifestyles modeled after the flower-power generation, are profoundly grateful. They’ve been intrigued, enlightened, and entertained for years by Daniels’ daring forays into political and social commentary as performance art. For instance, Malcolm X Meet Peter Tosh, Kolorada…a western tale, Black Hippie Chronicles and I, Edgar Hoover. And his CDs, 4:20 Report and Talkin’ Roots. All of which have been marvelously successful, especially considering that, owing to scant mainstream media coverage, word of his performances gets around by word of mouth.

Daniels calls Black Hippie Chronicles “a story of assimilation gone wrong.” Publicity material for a stint at IFCC Theatre (Portland, Oregon), relates, “As the son of a doctor who was the first African American in Hartford, Connecticut to have his own medical practice and a mother who was an educator and Civil Rights activist, David was raised in an environment unknown to many Black families in the 1960s. He claims that in his socially and religiously conservative home there was a strong motivation to become ‘white,’ to assimilate rather than celebrate the cultural differences of their heritage. Daniels turned to counterculture as a response to his upbringing and became a hippie like so many ‘privileged’ young people rebelling from their conservative roots.”

Ages ago, Daniels founded the Reggae Theatre Ensemble with his friend and technical director Mitch Olson. Through Olson’s association with Long Doe Records, Long Doe is producing Daniels’ newest, Cancer, Peace, Love and Assorted Realities. “What happens”, Daniels asks, “to the adult flower child still rooted in the ’60s and early ’70s when he is slapped with a Stage 4 Blood Cancer diagnosis?” This to update his autobiographical tale Black Hippie Chronicles. It’s directed by Philip T. Hunter, who collaborated on the radio drama Scenes from a Reggae Western and directed Black Hippie Chronicles.

David Daniels, ripping and running as usual, managed to take time from creating and getting ready to perform, and gave an e-mail interview.

Black Hippie Chronicles, describe that a little for me. Where and when was it performed and how did you find the experience?

Black Hippie Chronicles is actually one of my older pieces. Much of it was written at the same time I wrote and staged my first theatrical work Malcolm X Meet Peter Tosh, despite that fact it was staged 10 years after Tosh was staged. It was originally written as an ensemble piece and it had been workshopped during my Many Voices Residency at the Playwrights Center back in ’97, but sometime afterwards I had a chance meeting with the late monologue actor Spalding Grey. We spoke about the piece and afterwards he stated that because the piece was really about my life that I should make it a monologue.

Black Hippie Chronicles is the autobiographical story of going to the Rasta way of life from a black middle-class upbringing via the American counterculture of the 60s and 70s. It was performed at the Mercury Cafe in Denver Colorado in 2004 and at the old Center for Independent Artists in Minneapolis the following year.

What, aside from the obvious, prompted you to write this one?

Cancer, Peace, Love and Assorted Realities has its “roots” in the blog I kept going during the most intense period of my [cancer] treatment. The piece evolved from that. While my life and way of being may not be the “Average American way,” I am now also linked with millions from all walks of life. It also stems from a desire to give back to those who gave to me when I was diagnosed. The Leukemia and Lymphoma Society provided tremendous assistance and proceeds from this performance will benefit its Minnesota Chapter.

How did it come about that this production is at Dreamland?

This is a very personal and intimate piece. Dreamland Arts is an intimate theater space. I see it as an ideal setting for Cancer, Peace, Love and Assorted Realities. I have also known its director Zaraawar Mistry going back to my time at the Playwrights Center. He was the director at the Center for Independent Artists when Black Hippie Chronicles ran there.

How is it working again with Philip T. Hunter?

Great as always. We communicate well. He trusts my process and his input is invaluable. Phil comes from an extensive background in theater. My theater experience has been more offbeat. The blend works well.

What’s next after this?

One never knows for certain. As usual, there are a few irons in the fire. We’ll have to see which ones come into fruition. I’ll trust that whichever one manifests it will be the one that JAH has cleared the path for.

Anything you want to add?

Proceeds from this performance will benefit the Minnesota Chapter of the Leukemia and Lymphoma Society. I can personally attest to the effective assistance they offer to those impacted by the disease.