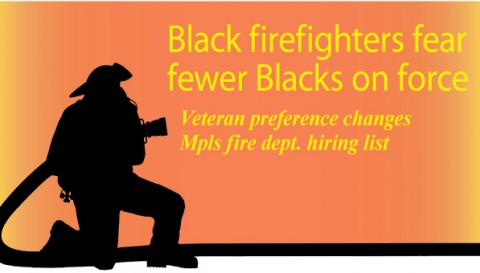 The Minneapolis Fire Department last month began its first firefighters’ class in seven years. However, only one of the 12 new hires is Black, which has several Black firefighters wondering if the department, which for six decades was all White, is abandoning its diversity goals.

Minneapolis Black Firefighters Association President Charles Rucker told the MSR that a seven-year-old applicants list had many more Blacks but was changed last year to include returning military veterans. “The list was very diverse,” he explained. “Now we have a majority White class.”

A new federal law last year gave veterans an additional five points as a preferred hiring candidate, explained Minneapolis Fire Chief John Fruetal. “People who were higher on the list maybe got bumped down, and if there was a veteran with the five [additional] points [the veteran] got moved up,” he noted.

“There were 21 persons that were into the process in terms of going in for the medical and psychological exams,” Fruetal continued. “We ended up with a group of 12 individuals who made up this latest class. The federal law change did have an impact on the diversity of this class,” admitted Fruetal. However, the chief reaffirmed his department’s commitment to diversity.

“You have to be committed — it is very important to be committed — to do a very effective job in recruitment of individuals to keep the playing field as even as possible, to give people an equal opportunity to be able to test and to compete for these positions,” Fruetal said. “I think we’ve done that, and it think it’s showing.”

Rucker, however, argues that although he and others support the hiring of veterans, this may have had an adverse effect on Blacks and other persons of color as a result. “You can get a diverse list and still hire veterans,” Rucker said. “They [City officials] reshuffled the list. The result is that we only got one African American and no women. We are questioning why this happened.”

City spokesperson Matt Laible told the MSR last week that 20 percent or eight people of color were on the narrowed-down list, and letters were mailed to prospects. “Without the additional veteran status points, there would have been six people of color within the top 40,” he noted. “Of the eight folks ultimately on the list, six did not respond to our request for hire, either because they were not interested or because their contact info was not up to date.”

“It is incredibly disappointing” that the first firefighters class of 2013 isn’t more diverse, admitted Minneapolis City Councilwoman Elizabeth Glidden in a brief interview with the MSR last week. “When I talked to the chief, I know he personally takes a lot of pride in [a diverse department] and doesn’t want to see steps going backwards but going forward. He wants the fire department to continue to reflect the community that it serves.”

“With us putting together a new hiring process, it is certainly my goal that this department will mirror the community it serves,” pledged Fruetal, who adds that 33 percent of the nearly 400 city firefighters are people of color, and 15-17 percent are women. He supports a diverse workforce when considering promotions within the department as well. “It just makes your organization that much more better.”

Melanie Rucker has been a fire captain for eight of her 14 years as a Minneapolis firefighter. She is among the approximately 70 Black firefighters in Minneapolis. She also was involved in the department’s latest recruitment effort. A three-day period for accepting applications ended last week.

“My efforts were to make sure that the word is out there… You name it, I’ve been there,” said Capt. Rucker.

“She has done an outstanding job getting into the community, making sure that we have a very diverse applicant pool,” says Fruetal of Rucker, who wants to see Blacks and other females of color to seriously considered applying for city firefighter jobs as well as males.

“Seeing me as a woman [firefighter] also is a benefit, and I’m a woman of color,” said Rucker.

When asked if the new rules would have an adverse effect on future hiring of Blacks and other people of color, “We can’t predict what effect the state law will have on future hiring,” admits Laible. “However, the fire department is always taking steps through the hiring process to ensure we’re focusing on diversity.”

“We don’t want to go back to lawsuits to get a diverse department,” says Charles Rucker, referring to two Federal Consent Decrees to hire more Blacks and other people of color. “We hear it, but we want to see it. We want to see the department diverse.”

“It’s amazing how one law changes and what kind of dramatic impact that can have,” notes Fruetal. “It is always challenging to maintain that equal opportunity for folks to have, and you can see here is an example of how one change in a law can certainly have an effect on department’s organization in trying to maintain diversity. It certainly had an impact on the hiring list.”

As a result, the chief said that additional points also will be given to city residents “to be right up to par with the vet preference points. The vet gets 10 points and the city resident also will get 10 points for being a city resident,” says Fruetal.

Melanie Rucker says that the firefighter application process can be time consuming but “it is attainable” for both Black men and women. “This is a job opportunity that is not known to us [Blacks] well. It is just getting us to take a chance and apply,” she said. “If we don’t have a diverse applicant pool, there goes our diversity.”