With an abundance of comedy clubs, theaters and workshops operating in the Twin Cities, one might think it would be relatively easy to find a place to see black (or urban as some call it) comedy.

Unfortunately, for area fans of black comedy, with the rare exceptions of a couple of large-scale tours, seeing urban comedians live has become a daunting task. But with the launch of the Northern Exposure Comedy Series, finding such shows should become a lot easier. The series, which kicks off on Wednesday, Feb. 22nd at the Fine Line Music Café, 318 First Ave. N, is bringing two headlining comedians, Damon Williams and Brandon “Hot Sauce” Glover.

Williams, who has been performing for nearly 20 years, first gained national exposure on the long-running BET series, Comic View. Following Comic View, Williams was then tapped to showcase his act on the groundbreaking, critically-acclaimed HBO series, Russell Simmons’ Def Comedy Jam. A Chicago native, Williams has continued to be one of the most sought-after comics and has been featured on P. Diddy’s Bad Boys of Comedy and the Starz Network series, Martin Lawrence Presents 1st Amendment Stand Up. Williams is now a regular on the nationally syndicated Tom Joyner Morning Show. 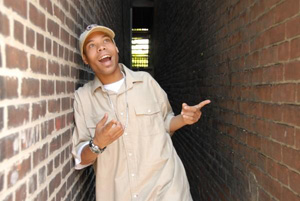 Glover (pictured, left), or “Hot Sauce” as he is more commonly known, is one of the newer, bright stars of comedy. A native of St. Louis, Glover gained national prominence after he won a comedy competition here in Minneapolis and was tapped to record a feature on Comic View. Following his BET performance, Glover reached rarified air for African-American comedians when his stand-up was aired on the Comedy Central network as a part of the Russell Simmons Presents comedy series.

Admission for Wednesday’s show is $15. Doors at the Fine Line open at 8 p.m. According to event promoters, additional seating is being added to the venue’s normal set-up but they suggest early arrival as there are no presale tickets. Following the show, there will be a meet and greet with the performers next door at Elixir nightclub. That event is free with paid admission to the comedy show.