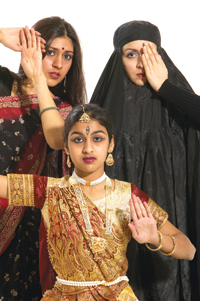 A woman cradles her newborn child. Arguing lovers echo each other’s angry gestures and stomps. A couple courts in sensual, acrobatic symmetry. A group of white friends chase a woman of color from her home. Fireworks, helicopters and a roller coaster soar above Disneyworld.

All of this takes place June 22-25 at the Ritz Theater as part of the Twin Cities-based Katha Dance Theatre’s Black Candle. The production interprets the poems of American writer Chitra Divakaruni, which tell the story of women’s lives today in India, Pakistan and Bangladesh. The Minnesota Women’s Press is a sponsor of Black Candle.

Divakaruni’s poems are interpreted by Kathak dancers draped in vibrant cloth with strands of bells wound around their ankles. Their bare feet pound out storylines as their necks and arms coax emotions.

Kathak dance takes its name from the word “katha,” meaning story, because of the dance form’s often narrative content. Influenced by both Hindu and Muslim cultures, the discipline originated thousands of years ago in northern India, and in the 16th century it solidified as a form of entertainment for rulers.

Black Candle’s stories are more intimate in nature. Katha Dance Theatre’s founder and artistic director, Rita Mustaphi, discovered the source material, Divakaruni’s poems, when her daughter read them for a high school project. Mustaphi was so moved that she traced the author to Berkeley, Calif., and met with her when she was in the Twin Cities for a reading.

Divakaruni’s characters struck Mustaphi as people she’d seen while growing up in Calcutta, and the two formed a bond “like sisters,” Mustaphi said. After three months of collaborating with a composer in India and six months of listening to the music in her lakeside home, Mustaphi choreographed Black Candle’s six vignettes. The visual language of Kathak portrays opera-like dramas through intermittent miming and a mixture of graceful and staccato movements. Western audiences are aided by occasional voice-overs of the poetry.

Building bonds
Those who work with Mustaphi often develop family-like bonds. Young students address her as “auntie”; older company members call her “sister.” Students, some who have been with Mustaphi for more than 15 years, touch her feet as a sign of respect before leaving the rehearsal space.

In rehearsals, choreography is malleable and dancers collaborate on solutions, with Mustaphi calling out steps in a quick, punctuated series of syllables, each representing a position of the foot as it strikes the floor.

Eighteen-year-old Katha intern Frannie Boehnlein is of Indian descent but was adopted by non-Indian parents. Kathak has been her doorway to Indian customs. “It’s not just about dance, it’s also about religion and culture.”

Kathak dance has been compared to hip hop and “tap dance with bells,” Boehnlein said. But like other Katha company members, Boehlein is adamant that the form is classical, not folk. It has a high-art pedigree like that of Western ballet.

Breaking boundaries
Mustaphi owes her Kathak career to a degenerative bone disorder. As a small child, a doctor encouraged her parents to make her exercise as treatment for her illness. Upper-class girls were not allowed out of the house, so dance instructors taught her at home. When her talent came through, Mustaphi said, she was allowed to attend classes and studied under Pandit Birju Maharaj, a famous master who has been called the Baryshnikov of Kathak.

When her parents urged her to forgo college to marry as soon as possible, Mustaphi’s grandmother insisted she go to school. After years of intense study, however, she entered into an arranged marriage. Her father was hesitant to allow her to continue dancing because married women at that time were not supposed to dance in public. Mustaphi’s mother-in-law, whom she describes as “one of a kind,” convinced her father that to forbid her to dance after years of instruction would be a waste.

The movements in Black Candle do not represent strict, traditional Kathak—Mustaphi likes to push boundaries. A traditional Kathak dancer would never roll on the floor, and sexual situations would be suggested subtly. Mustaphi’s characters sit, lay and fall to the ground, and love scenes are almost embarrassingly steamy. The boundaries Mustaphi breaks are not just physical—her work addresses domestic violence, racism, adultery and globalization. When Katha Dance Theatre traveled to New Delhi to perform at the prestigious International Kathak Dance Festival, Mustaphi led them in Sudha’s Story, a controversial tale of breaking the bonds of an oppressive marriage.

Mustaphi hopes confronting difficult themes is not done in vain: “Not that I can change the world or stop the violence,” she said, but she says her work will be validated when one person, male or female, sees their own destructive behavior in a dance and decides to change