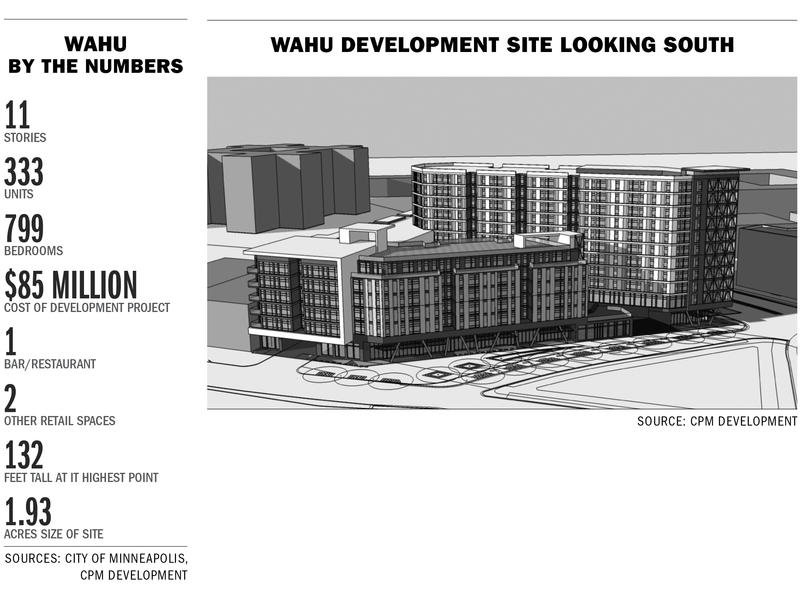 A 333-unit student-housing development will begin construction in Stadium Village by January. The complex, WaHu Student Housing, is set to open by fall 2014 at the intersection of Washington Avenue and Huron Boulevard.

WaHu has been well received by the city and the Prospect Park East River Road Neighborhood Association. But neighboring Caspian Bistro has appealed the plan, saying the development threatens the health and safety of its customers.

Representatives for Caspian Bistro testified that the complex, which would share a wall with the restaurant, will quadruple the snow load on the bistro’s 100-year-old building.

City and neighborhood officials said this is not an isolated problem. The luxury-housing boom often forces existing businesses to consider compromises with developers.

The appeal to move WaHu 20 feet away from the property line was denied by both the Minneapolis Planning Commission and the City Council last month.

As construction moves forward, the council has ordered developer CPM Development to work with the bistro and a third-party engineer to resolve the snow-load issue.

With 799 bedrooms, WaHu will be one of the largest housing developments in Minneapolis, according to City Planning Commissioner Gary Schiff.

“It’s packed, jam-packed with amenities,” CPM President Daniel Oberpriller said. “The sheer size of it allows us to pack in an exorbitant amount of services.”

The $85 million complex will include a pool and fitness center, iPod docks in every unit, a concierge desk with available maid service and more, Oberpriller said.

The triangular building will take up the entire lot. An 11-story tower will sit front and center on the site, flanked by six-story wings on either side.

“It’s too big of a building on too small of a site. That’s the theme of the day,” said Paul Erickson, president of the architecture firm ATS&R. Erickson testified on behalf of Caspian Bistro in last month’s hearing.

Representatives for Caspian Bistro argued that the developer had not demonstrated a need for this large of a development and the amount of variances and rezoning granted to the project were unjustified.

According to a site plan from the city of Minneapolis and WaHu architects at BKV Group, the apartment complex is to share a wall with the Caspian Bistro on the ground floor. The upper-level floors are set back 10 feet from the Bistro.

Abi Assadi, CEO of Clark Engineering, testified that once completed, WaHu will increase the snow load on the bistro from 40 to 120 pounds per square foot, a strain that he said the 100-year-old building cannot withstand.

Caspian Bistro owner Hossein Azhakh said the bistro has had problems with excessive snow fall on its roof before.

With WaHu pushed back 10 feet, the snow load would only increase slightly to an amount well within the bistro’s capacity, BKV CEO Jack Boarman testified.

In a later interview, Chuck Lloyd, attorney for the Caspian Bistro, called the estimates “a complete joke,” noting that no one from CPM or BKV had been to the bistro to inspect its roof.

“He has no idea what it will withstand. It was all assumptions. The City Council just bought it, ignored the situation and moved on,” Erickson said. “I’m embarrassed for the city of Minneapolis.”

Lloyd said the bistro’s appeal was ignored because of the project’s potential profitability.

“I think there’s little doubt that what the city sees is dollar signs,” Lloyd said. “They see tax revenue, and they see jobs, and they don’t want to stand in the way of either those things.”

“My job is to be the honest broker here,” he said. “The neighborhoods aren’t in a powerful position. We aren’t the city, we don’t have staff, we can’t enforce things.”

Gilyard said the neighborhood association has advised the developer and the city to increase density on the site in order to move more student housing closer to campus and out of converted homes in Prospect Park.

At last month’s hearing, Gilyard expressed his regret that the Caspian Bistro was having problems with the development, and in a later interview he said such problems were inevitable.

“It’s hard to measure. I know there will be an impact on their business during construction,” he said. “[But] if it wasn’t this project by this developer, it would have been another large-scale project by another developer.”

Minneapolis city planner Becca Farrar said as long as the building is up to code, snow load is a civil issue between Azhakh and WaHu.

The neighborhood faced a similar dilemma last year when the recently opened Edge on Oak apartment building was under construction. The six-story development now shares a wall with Tofu House, a neighboring, one-story restaurant.

Oberpriller said CPM will pay for the renovations necessary for reinforcement of the bistro’s roof.

“We don’t want to ruin [Azhakh’s] life,” Oberpriller said. “We are doing — and paying for — everything we can, as a good neighbor would.”

Azhakh said he would be open to the idea, but he is unwilling to close for renovations without additional compensation for the business he would lose.

“Closing is not an option,” he said.

Gilyard said he hopes Azhakh and Oberpriller can reach a compromise.

“I think for some reason there was a breakdown of communication between the development team and the Caspian,” he said. “There’s distrust here, too. … I don’t know exactly how to overcome that.”