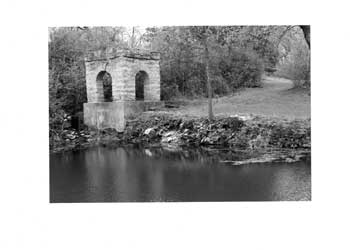 Last fall the National Park Service (NPS) considered selling off 23 percent of its total acreage. That proposal was booed out of existence by public outcry but despite small increases, America’s “crown jewels of the outdoors” are systemically underfunded by appropriations that do not keep pace with the value of the dollar.

No Minnesota parks were on the cut list, but the 27-acre Coldwater Spring property near Fort Snelling may never make National Park status. Only Congressional approval creates new national parks and Coldwater is losing its champion with the retirement of Representative Martin Sabo.

Park or parking lots
Five years ago Coldwater was scheduled to be sold to the Metropolitan Airports Commission (MAC) for $6 million. MAC planned to build a multi-story parking garage into the bedrock that supplies groundwater to the spring. Several warehouses would have provided storage space for airport maintenance vehicles. After the 9/11 World Trade Towers disaster and the collapse of the airline economy, the sale was cancelled.

“It’s the only good thing to come out of 9/11,” said Jim Anderson, Cultural Chair of the Mendota Mdewakanton Dakota Community.

Coldwater is classified as “the former Bureau of Mines” in National Park Service lingo. A two-year process to determine the “disposition” of the Mississippi blufftop acreage will stretch into a third year as deadlines are missed and extended. Clearly NPS, which was willing to sell Coldwater for parking lots, is not hoping to keep Coldwater. Coldwater is “too complicated” according to JoAnn Kyral, NPS superintendent of the Mississippi National River and Recreation Area.

An office park is one of the alternatives NPS is looking at for Coldwater’s future. When Tiffany Eggenberg, a Mendota Dakota community member, heard “office park” she was “flabbergasted!”

“Office park! Oh my gosh, I am so appalled! I hadn’t heard talk of this,” said the mother of sons aged 13 and 7. “You know myself and my family want to be involved, the kids too. We are not church people and we never really did much praying before because we couldn’t find a ‘religion’ or whatever you want to call it that we agreed with, until we became involved in the Mendota community.

“I will say it again, my kids learned how to pray at the spring and, well, so did I pretty much. It turns out we are very spiritual people and always have been as far as nature and the earth are concerned, now we have found an avenue to act upon our feelings and they are trying to ruin one of the most special places we know!

“We love Coldwater and want to be involved in preserving it,” Eggenberg said. “The kids ask all the time, ‘When are we going to Coldwater?'”

Options other than an office park that the Draft Environmental Impact Statement (DEIS) will review include demolishing the 11 abandoned office and warehouse buildings and turning the property over to a university or government entity “with or without (unspecified) conditions.” The DEIS will probably be made public in August.

Two park options will also be discussed in the DEIS: open space and an interpretative museum. After the draft comes out, the public will have 60-days to comment on the various proposals. Meanwhile two federally recognized Dakota tribes, Shakopee and Prairie Island, have indicated they want to acquire the land. A final decision on the future of Coldwater should be announced in 2007.

Complications
Just about the time the Final EIS comment period closes a federal district court case is scheduled concerning Coldwater and Dakota treaty rights. Last October, two Dakota men and a guest entered the Coldwater campus without a paper permit in order to collect water and pray. The three were ticketed and have appeared twice in U.S. Federal District Court on petty misdemeanor charges. A motion to dismiss the charges based on 1805 Dakota treaty rights was rescheduled from June 9 to September 25.

In 1805, Zebulon Pike signed a treaty with the Dakota Oyate (people or nation) for a fort to keep pioneer encroachment out of Dakota Territory. The treaty guaranteed the oyate visitation and land use rights in perpetuity, specifically the rights to “pass, repass, hunt and do other things as they have formerly done in said district….”

On the old maps Mni Owe Sni (water-spring-cold) is situated at the foot of Taku Wakan Tipi (Where the Spirit Dwells), the traditional burial hill where the Veterans’ Administration hospital stretches up to the Twin Cities airport. This great hill is the water source that still delivers 100,000 gallons a day to Coldwater Spring.

Because the hill is wakan (spirit or sacred) the spring is wakan. In court-ordered testimony during a 1999 Highway 55 case, the 2.5-mile Mississippi blufftop land from Minnehaha Falls to Coldwater Spring to the confluence of the Mississippi and Minnesota rivers was described as “forever neutral and forever sacred.”

The last time a Hiawatha-Highway 55 case was in federal court was six days after the Four Sacred Trees were felled. The December 1999 case involved a Traditional Cultural Property claim by the Mendota Mdewakanton Dakota Community for the protection and sacred recognition of the Four Trees.

While the future of Coldwater is being determined, the legitimacy of the 1805 treaty is postponed until September, and a court case among federally recognized and unrecognized Dakota peoples is in the offing.

Why bother saving Coldwater
Coldwater is the only non-park land along the west bank of the nine-mile gorge from the confluence of the Mississippi and Minnesota rivers upstream to the falls now called St. Anthony. The downtown riverfront was given a $300 million facelift recently. This nine-mile stretch is the only true river gorge on the 2,350-mile length of the Mississippi and Coldwater is the only fenced-off blufftop portion.

Coldwater is the last natural spring in Hennepin County. The spring that furnished water to Fort Snelling for a century, until 1920, is the last local place people can drink water directly from limestone bedrock. The chemically-treated river water that is electronically delivered to our kitchens and bathrooms may not always be available and MnDOT permanently dewatered the Great Medicine Spring in Theodore Wirth Park with construction of I-394 in the 1980s. Glenwood Spring is gone, permanently, and the William Miller Spring in Eden Prairie comes out of a pipe below a road.

“Forever sacred” Coldwater has to re-verify its sacred credentials in a court that weighs paper proof above oral history. If European Minnesotans are not impressed with 9,000 years of Native American life in the Coldwater area, they are interested in military and pioneer settlement here.

Coldwater is the birthplace of Minnesota, where the soldiers lived who built Fort Snelling and a pioneer community developed protected by and servicing the fort with translators, servants, wives and meat.

Despite being sacred Native America land, the birthplace of the state of Minnesota, and the last natural potable water source in the Twin Cities, Coldwater is in danger of being privatized. Michael Shnayerson in June’s Vanity Fair lays open the Bush agenda for National Park Service lands.

The NPS was established in 1916 to leave parklands “unimpaired for the enjoyment of future generations.” Under the current regime conservation has been downgraded to equal consideration with recreation, including private development. “Recreation” includes gas-powered snowmobiles, all terrain vehicles, jet skis, even viewing parklands from helicopters and airplanes.

The window of opportunity that will allow us to save Coldwater is opening. Public pressure is the key to preserving and protecting the spring.

Coldwater is open Monday-Friday, 9 a.m.3 p.m. to the public without a permit. For directions and information “click here:”http://www.FriendsofColdwater.org.