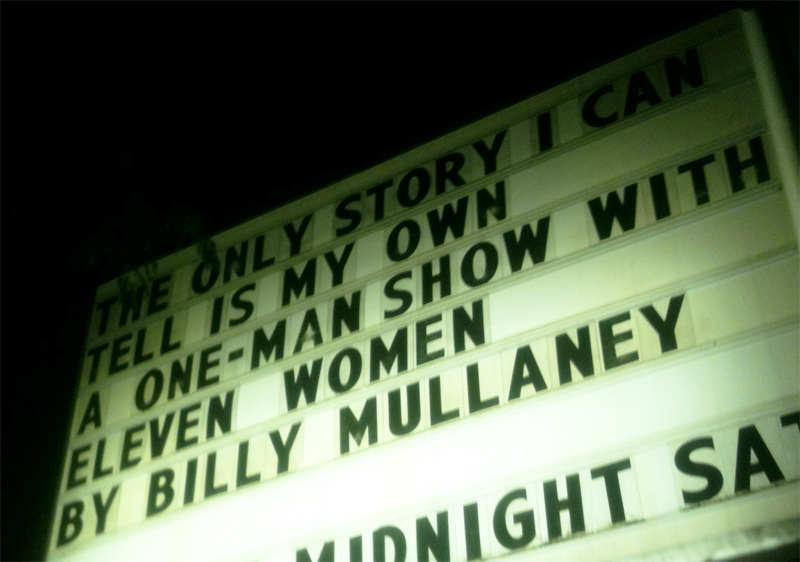 Some time ago, I saw a professional production of an often-performed play that requires one of the actresses to be scantily clad for most of the show’s duration. Prior to the production’s opening, I’d overheard the company’s artistic director make reference to that actress in a tone that made clear he found her very comely. The artistic director was present in the audience on opening night, and along with the rest of the audience we sat and watched the actress perform in a state of undress. At the end, everyone applauded.

A different actress, a friend of mine, recently told me about a play she was once in where nudity was not required, though there was a scene where nudity might be considered appropriate. Once rehearsals began, the (male) director strongly suggested that he hoped his female cast would remove their shirts during that scene—not because they were required to, but out of a sense of artistic integrity.

A couple of weeks ago I saw a show called Snowfuck, an independently produced and collaboratively created show in which its cast of five men and women were often partially or completely naked: sometimes singing, sometimes making out, sometimes pressing ice against their nipples and other parts of their bodies.

There might have been formal talkbacks at some of the shows I describe above, and there were of course informal conversations surrounding each, but explicit discussion of power, privilege, and control was not mandatory for any those shows. For Billy Mullaney’s show The Only Story I Can Tell Is My Own, a One-Man Show with Eleven Women—a show that had its single performance on July 16 at the Southern Theater—discussion was non-optional. Every single audience member, prior to attending, was required to have a one-on-one discussion with Billy about the show’s conception and development.

I talked with Billy for about an hour—as did Sheila Regan, who described the piece in a Daily Planet post that’s attracted comments along the lines of “Apparently being a jerk is part of the white male privilege creative process”; “I think the whole thing is an idiotic pose”; and “A very common and vulgar analogy comes to mind that refers to doing something to create what doing that thing eliminates.”

What was this intensely controversial show? In brief, the show came out of Billy’s participation in an artistic collaborative that, for various non-deliberate reasons, included only white men. How, wondered Billy, did that fact limit the stories those men could tell? This question led to a long series of ideas and discussions that ultimately resulted in the creation of The Only Story I Can Tell Is My Own.

This led to further discussions. One thing that became clear was that the continuum was too simplistic: there were some actions that some of the women would willingly do in private, but not as part of a show. In the end, the show developed into three parts, all of which took place from 10 p.m. to 12:50 a.m. on the night of July 16.

In Part 1, the women appeared onstage with Billy and performed acts they were uncomfortable with, to varying degrees, but that they had agreed they would do as part of a show. Knuckles were cracked, one woman hung from the rafters, the women donned costumes and did faux battle with Billy. Part 2 was much more loosely structured, and involved only actions the women had ranked six and seven. Billy and the women made ice cream cones, swapped clothing, and simulated a prom dance.

Part 2 sounds like it would be less intense than Part 1, but in fact, the atmosphere in the Southern became increasingly uncomfortable as Billy and the women explored their mutual degrees of freedom. One woman broke down in tears as she told Billy, onstage and in full view of the audience, that she was upset with how things were developing and felt like her voice wasn’t being heard. In the final scene, Billy attended his own funeral—in, for some reason, the character of Bruce Wayne—while several black-clad women (some, by this point, had stopped performing) spoke freely to the audience about their experiences.

Part 3 was a talkback, for which perhaps a dozen audience members stayed to form a circle onstage with the performers. Each person in turn then shared his or her thoughts.

Most audience members expressed conflicting thoughts and emotions. One man said that “on the surface,” his reaction was strongly negative towards Billy, but that the entire experience was causing him to think productively about questions that he rarely was given cause to think about in a theatrical context. Another man actually apologized to the women for his part in the production’s “dehumanizing” of them. “What if Billy had decided to explore another aspect of his privilege?” he asked rhetorically. “Would we all be sitting here talking about what ‘the blacks’ did onstage instead of what ‘the women’ did?”

One of the performers, though, sharply rebuked that man. “Being told I’m dehumanizing myself by my willing participation in this show,” she said, “is more offensive to me than anything that happened onstage tonight.” Other women said that while the show had made them uncomfortable, they’d known going in that it was going to be an exploration of themes and relationships that could lead to—in fact, was meant to lead to—an uncomfortable place. One admitted that she’d needed the help of whiskey to give her “permission” (her word) to be as open as she’d been onstage.

One of the women outright quit. In fact, she’d quit before the show even began: by prior arrangement, she was represented onstage by another actress who sat diffidently in a chair, playing the role of the departed performer. During the talkback, that actress read a letter from the original performer explaining why she’d quit: in short, she felt uncomfortable with Billy’s role in the process and had come to decide that she could no longer continue being part of the experiment.

What was the point of it all? Every person who was at the Southern on July 16 will have a different answer to that question, but here’s my answer: by deliberately trying to construct a show that opened a window to the power dynamic between director and performer—a power dynamic that, in this case as in many others, was also a gender dynamic—Billy and his collaborators demonstrated the impossibility of either doing away with the power dynamic or explaining it away.

The women who participated had all made conscious choices to do so, each for her own reasons. (I don’t believe there was any monetary compensation involved.) Some declined Billy’s invitation outright, others left during the process of creating the show. Some stopped performing during the show itself. Further, every individual action performed during the show had been negotiated ahead of time via survey and discussion. And yet, some performers and audience members were clearly uncomfortable about the show.

Why? Why did some performers feel manipulated, and others feel satisfied? Why did some audience members get angry at Billy, when we all knew the entire premise of the show before we chose to walk in the door? Why did one attendee feel compelled to outright apologize to the performers for his complicity in the show? Why were we all even there?

I don’t have easy answers to those questions, and I don’t suspect anyone does. Nor do I think there would be easy answers to those questions if we asked them about the shows I described at the beginning of this post. Was there anything wrong with the scenario I described in the first paragraph? I’m guessing that actress probably wouldn’t have been surprised to learn that some attendees might have enjoyed watching her performance for other than strictly technical reasons. Should there have been a talkback where we all discussed our feelings about onstage skin-baring? Would that have changed anything?

My ultimate feeling about The Only Story I Can Tell—or, at least, my feeling right now about it—is that Billy and his collaborators did us (and possibly themselves) the service of baring some of the high-voltage wires of power and privilege that lie behind any theatrical production…and, if you buy the theory that all of life is a stage, that lie behind every day of our lives. The show asked unsettling questions for which there are no simple answers, and left us all wondering why we felt the ways we did about our experiences that night.

One scene in Part 1 that seemed to particularly distress some of the performers involved one of the women stripping to her underwear and lying down, per prior arrangement, to receive hickeys from Billy and possibly from other performers. At the Southern, she lay down ready to be hickeyed…but then Billy called it off, signaling that he’d prefer to move on to the next scene. In Part 2, Billy was asked why he’d done that. “I wasn’t comfortable asking for that in front of the audience,” he admitted. It seemed, though, that at least some of the performers thought it was hurtful, embarrassing, or even offensive of Billy to set that scene up and then call it off, to use his position of power to decide there and then what would and wouldn’t happen.

Is that the crucial difference between the first play I described, above, and The Only Story I Can Tell? Does trading a script for a process of onstage negotiation lead to the kind of hurtful abuses of power that a script insulates a show from? How would we feel differently about The Only Story I Can Tell if Billy had scripted the entire show from the beginning? Does a script prevent abuses of power, or just cause them to be ignored?

The last person to share his thoughts at the talkback was, appropriately (or, perhaps, completely inappropriately), Billy Mullaney himself.

“I’m scared,” Billy said. “I’m scared to find out what will happen next.”