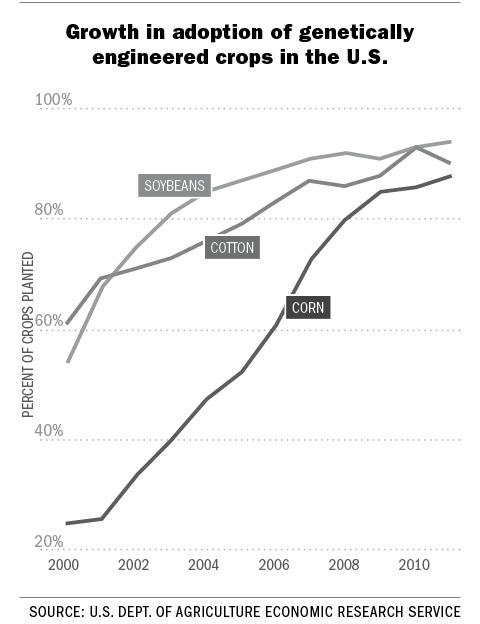 Democratic-Farmer-Labor lawmakers in the state Legislature have proposed a bill that would require all genetically modified foods for sale in Minnesota stores to be clearly labeled as such.

Genetically modified crops can have their DNA changed to make them pest- and disease-resistant, tolerant to herbicides and in certain cases, more nutritious.

Those advantages have led to the widespread use of GMOs in the American food market. It’s estimated that up to 70 percent of processed foods contain a genetically engineered ingredient, according to a 2010 study from Colorado State University.

Several countries require genetically engineered foods to be labeled, but the U.S. Food and Drug Administration doesn’t. No states in the U.S. have such labeling requirements for GMOs either.

One of the co-authors of the Minnesota bill, Rep. Phyllis Kahn, DFL-Minneapolis, guessed that the bill will not pass the Legislature this session.

However, there is a growing movement in America for improved GMO labeling. As of February, almost 20 states  were considering such legislation, according to the National Conference of State Legislatures. And a Connecticut bill that would require GMOs to be labeled recently passed through legislative committee, moving the state one step closer to become the first with such a policy.

According to a 2010 poll by Reuters and National Public Radio, 93 percent  of the American public wants food that has been genetically modified to be labeled.

Ted Labuza, an expert in food law and labeling in the College of Food, Agricultural, and Natural Resource Sciences  at the University of Minnesota, said labeling GMOs is a matter of “informed consent.”

“You label it, and then those who want to avoid it have the right to know that it’s in there. So you put the label on so they can avoid that product,” he said.

Glen Hill, executive director  of the Minnesota Food Association, said he thinks the public has a basic right to know “what’s in their food and how it’s produced.”

Some consumers may be worried about GMOs for health risks, but Labuza said there’s no research to back up claims that GMOs are unsafe.

Kahn said even though there are no known health concerns related to GMOs, labeling foods that contain them can allow consumers to avoid buying foods that are grown in ways that may harm the environment in an unseen manner.

“It’s my way of making a statement,” she said.

Labuza said the work required to analyze foods for GMOs and label products would cost the state and businesses.

“Having this labeling requirement [would] put a greater burden on the industry.”

Hill said it would initially be very difficult for farmers and businesses to adapt to a labeling requirement.

Kahn pointed out the rising popularity of organic foods — despite a higher price — as an indicator of the success labeling GMOs could have.

Hill said it would be in the best interest of the public and the national food industry’s long-term health to pass a bill with a labeling requirement.

“It’s very clear the people want to know, and when they do know, they’re going to be more concerned about it, and they’re going to start looking for foods that are not genetically modified.”