Joggers make their way down the planned route for the University of Minnesota Bikeway Monday afternoon. The City of Minneapolis has decided to bypass the acquisition of railroad land which has held up progress on the project so far. (Photo by Nicola Losik)

After more than a decade of delays, construction on a bike path through the University of Minnesota campus will begin sometime in 2012.

Plans for the University Bikeway, which will run from the Northern Pacific Bridge No. 9, a pedestrian bridge connecting the East and West Banks, to Oak Street near TCF Bank Stadium, have been in the works since the late ’90s.

The city of Minneapolis ran into trouble acquiring some of the land on the route to start building. Most of the property belongs to the University, but the Burlington Northern Santa Fe Railway Company still owns portions of land around the abandoned tracks.

After meeting with University officials Friday, the city will move forward with a plan to bypass any BNSF-owned land and build the bikeway only on University property.

The route change means bicyclists will have to share the path with University vehicles and vendors.

Steve Sanders, campus bicycle coordinator for the University’s Parking and Transportation Services, said a minimal amount of vehicles use the path. Sharing the bikeway with vehicles should not be an issue.

“The vehicles … could be trained to operate on the bikeway as well,” Sanders added. 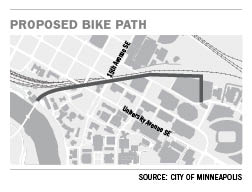 The bikeway will fill an important gap in the trail system by creating a continuous path from Minneapolis to downtown St. Paul, Sanders said.

The bikeway is funded by a federal grant from Transit for Livable Communities, which also funded the University Bike Center and RFID Program.

In order to receive that funding, the city will need to submit the plan to the Minnesota Department of Transportation by Dec. 1, according to Steve Clark, walking and bicycling program manager at Transit for Livable Communities.

“We’ve been in this spot before, but right now time is of the essence,” Sanders said.
“They have to get something in there or else the money goes away.”

This is the third time that the city has been in line to receive funding for the project. Problems acquiring the land from BNSF have forced the city to turn the money away twice in the past, Sanders said.

The project is high priority for the city, Clark said, who expects the city to complete its plans this time around because it no longer has to acquire BNSF land.

“In the end, I think it will be a win-win for everyone,” Clark said.

By only building on University land, TLC is expecting to save at least $800,000 on the project.

“That is money that can be used for other valuable projects around the city,” Clark said.

Once the city turns in the plans, MnDOT will have to approve the plan before the city can begin looking for proposals from contractors.

“The important thing to us is that it is built in 2012,” Clark said. “The earlier the better.”